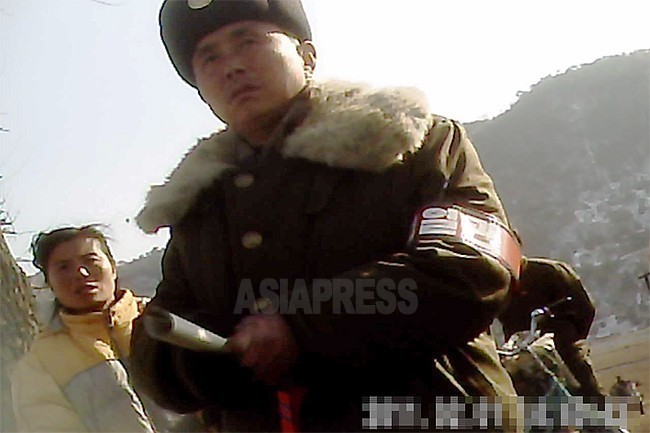 (Photo) A police officer inspects residents passing by on the street. Photographed outside Pyongyang in January, 2011 by Kim Dong-cheol (ASIAPRESS)

For the first time since Kim Jong-un took power, the regime has not broadcasted a “New Year’s Day address.”

Last month, from December 28-31, the Central Committee of the Worker’s Party held a 4-day plenary session and decided to require all citizens to memorize the report produced by the session. Citizens would be required to memorize and recite this report in the same manner as which they memorized the “New Year’s Day address” in previous years.

The plenary session report was mass-produced and distributed to workplaces, administrative agencies, and the Socialist Women’s Union of Korea as well as other organizations. These organizations then held lectures and contests for reciting the material and answers questions on the content.

According to a reporting partner in Ryanggang Province, who spoke with ASIAPRESS on January 9, “The content of the report was, predictably, focused on ‘self-reliance.’ Though, what is worth paying more attention to and, frankly, quite nerve wracking, is the emphasis on ‘mental rearmament’ at the lectures.”

Lectures conducted at organizations or workplaces are presided over by party officials. “Some of those party officials”, the reporting partner said, “criticized others in the party for being mentally or ideologically weak, or for succumbing last year to the hardships of the imperialist’s economic blockade. These officials stressed the need for a ‘mental rearmament’ within the party.”

The plenary session report, as released through the North’s state media, begins with the words “In a head-to-head struggle with unprecedented challenges and difficulties...” This preamble can be interpreted as an admission by the regime that the domestic economy is in a very difficult situation due to the international sanctions.

The term, “mental rearmament,” referred to by party officials at lectures and emphasized by the plenary session report, suggests that the regime’s instructions to party, military, and administrative officials were insufficient and failed to resolve the economic situation.

Regarding the emergence of this term, a North Korean defector with strong knowledge of the regime’s power structure gave the following analysis.

“Even if they are direct orders from Kim Jong-un himself, those impossible demands cannot be carried out. Therefore, the officials who were simply ordered by the regime to achieve objectives through ‘self-reliance,’ without receiving any specific instructions, will have been replaced by other officials who will also fail to execute the orders.

The term ‘mentally rearmament’ means to follow with absolute obedience to the policies put forth by the party and Kim Jong-un. In other words, the order reins in officials and escalates the tension among them. I am sure that many officials will now be punished and purged.”