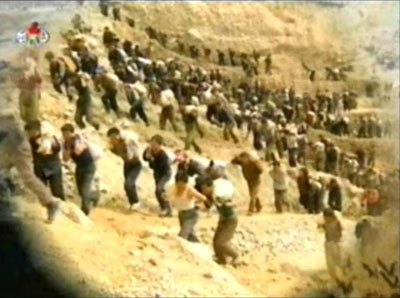 Footage of ‘6.18 Storm Trooper’ on Chosun Central TV. There are large number of people with light cloths and without helmets. The broadcast boasted the achievement of human wave strategy. September 2004.

◆Group protesting by parents to get their kids back.

‘A’ continues “The caught juveniles, regardless of their gender, are sent to the trooper office without a chance to notify their family. Parents, being worried about their kids who didn’t come back home, can finally learn where their kids are when they are informed to go to the Youth Union from the securities office.

ASIA Press asked another reporting partner ‘C’ in North Hamkyung Province for investigation and got a reply on April 12: “The parents couldn’t just sit and wait when their kids are arrested. Every day they shout or cry out to get their kids back in front of XX District Party office. There was a group protest of 15 parents on April 2. The Party notifies the arrest of the kids to their parents who are police officer, high ranking official, or rich and requires them to pay a fine of 800,000 won (U$100) for the release of those kids. Poor parents are wailing and protesting; Is it right to take those kids from families without power like a piece of luggage? An acquaintance, whose daughter was arrested, said that he was told from the security office, “Educate your kid well! If you want to see her, go to ‘6.18 Storm Trooper.’

What on earth is ‘6.18 Storm Trooper’? Reporting partners explain as follows;

“If you were taken there, you have to work for six months at least. It is a military life. The Youth Union sends violators of public morals to the Trooper as they can hardly find any applicants for them. (‘B’)

“The detainees become half-dead as they have to work long hours for a lightening construction with a meager meal with salt soup. This is my first time to see this kind of ruthless mobilization (for the Storm Trooper). It seems certain that there was an order from the superior office since the mobilization is happening everywhere.” (‘A’)

◆Is the mobilization for the lightening construction for the preparation of the Party Conference?

Why do they use such an unreasonable measure to send the juveniles to the enforced labor? One of the reasons seems that the authorities want to tighten discipline of the society for the upcoming the Party Conference in May.

Market economy has expanded in North Korea during the last twenty years silently. With permeating overseas information, capitalists’ decadent culture, so called ‘Yellow culture’ by the North Korean Government, permeated among the youth who are admiring South Korean and Chinese fashion style.

The Party’s agency in charge of social order may be criticized or punished if there would be any disorder before the coming first Party Conference in 36 years, at which Kim Jong-un would preside by himself. Being pressed, they strictly try to crack down on public morals of the youth.

1 2 3
Facebook Twitter はてブ Pocket Feedly
RECOMMENDATIONS
People believe that the sanction should hit hard on Kim Jong-un and the high ranks, but inevitably it is hitting on people’s lives as well……
Resolution “2270” of March 3rd to impose sanctions on North Korea, whi...
Fishy Business: Will Resumed Smuggling at the Chinese Border see a Return of the North Korean ‘Ghost Ships’?
◆ Illegal fishing in Russian waters draws gunfire On October 7, a Nort...
＜Inside N. Korea＞Robberies, Violent Crime on the Rise: Discharged Soldiers Suspected of Impersonating Police to Mug Citizens
Crime is on the rise across North Korea. In particular, there has been...
＜Inside N.Korea＞ Trading Firms Halt Wage Payments Due To Sanctions
2018/Feb/22 The economic sanctions on North Korea seem to be working....
＜Latest Report on N.Korea＞Another year of emaciated soldiers in N.Korea; Young Soldiers suffering with Malnutrition (Four Photos)
In late July, a reporter for ASIAPRESS was on a cruise ship on the Ya...
＜Inside N. Korea＞ Electricity Situation Deteriorates Further as Equipment Remains Stuck in China… “Even in the city center supply is limited to one or two hours a day”
Sixty to seventy per cent of North Korea's electricity comes from hyd...
[Video Report] N.Korea Soldiers selling seaweed at a market
In July 2006, North Korea successively conducted missile tests which w...
N.Korean Workers' Party Imposes Tough Measures to Maintain Discipline
- State accelerates social mobilization for loyalty to Kim Jong-un 201...
＜Inside N. Korea＞ Nationwide Warning Issued After Electric Bike Battery Explodes, Killing Family of 3 in Pyongyang
An electric bicycle battery exploded while being charged in a Pyongyan...
＜Photo Report＞ Abandoned Elderly (PART1) Collapsed Social Welfare System Has Left the Elderly on the Streets.
2016/Jul/26 Children and the elderly are the biggest victims of the c...