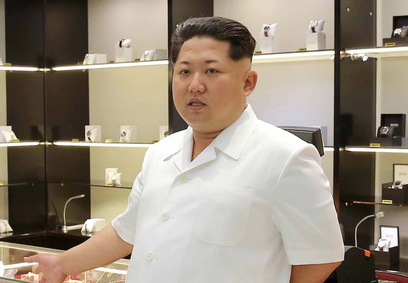 Kim Jong-un, whose health condition is drawing the attention of the world’s press. Photograph originally published in June 2015 by the Rodong Sinmun

On April 21, reports of “Kim Jong-un undergoing heart surgery” and breaking news headlines of the leader appearing to be “in critical condition” circulated around the world. In North Korea, this news is now beginning to spread in areas close to the border with China.

ASIAPRESS spoke with a reporting partner living in Ryanggang Province on April 22. The reporting partner explained, “Information about Kim Jong-un undergoing an emergency heart surgery is spreading through the traders. People say that this could be true because, back when Kim Jong-il died, there were more people made aware of it through Chinese media than through North Korean media.”

The reporting partner continued, “If something did happen to Kim Jong-un, who would be the next leader? After Kim Jong-il’s death, Kim Jong-un told us that he would enrich our lives, but there have been no political changes and our lives have only become more difficult.”

Speaking with another reporting partner, ASIAPRESS learned that there have been no changes in the movement of officials nor in the level of security out on the streets. (Kang Ji-won)