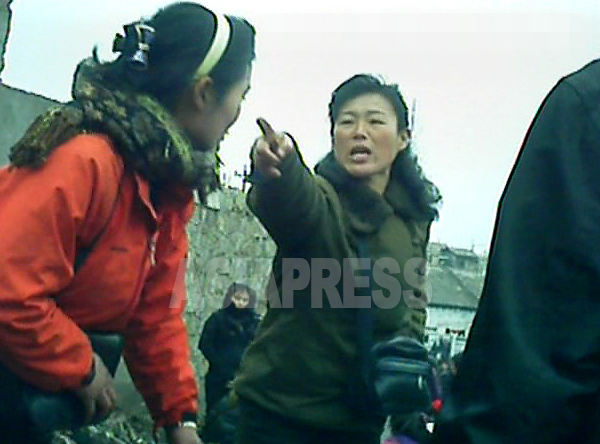 (Photo) An official forces a young woman (left) selling goods on the street to pay a tax. Photograph taken in South Pyeongan Province in March, 2013 by ASIAPRESS

Due to economic sanctions ordered by the U.N. Security Council, North Korea has seen its trade revenue drop by about 88 percent compared to 2016, leading to a total loss of 2.7 trillion South Korean won. While this has certainly impacted the regime’s treasury as well as the lives of Pyongyang’s elite class, the economic burden has largely fallen upon ordinary citizens as the government finds new ways to exploit its people. (Kang Ji-won/ISHIMARU Jiro)

A local merchant in provincial North Korea explained the increasing burden, “If you add up all of the individual costs, the state extorts about 80-100 Chinese yuan (13,000-16,000 South Korean won) from us each month.” This total represents 30-50 percent of an average household’s monthly income. Though not officially levied by the government, citizens call the practice a ‘tax burden’.

Aside from this unofficial tax, the government has found new ways of exploiting ordinary citizen for state funds. Starting from December of last year, authorities began forcing all households to enroll in a state-run insurance program. A reporting partner  in a Northern region of the country said that the program is being run by the ‘General Directorate for Korean National Insurance’.

Next page : Enrolling in an insurance program to prove loyalty to the state…