It goes without saying that the North Korean national railway is run by the state. However, it has been one of the few enterprises that has continued to operate under the DPRK's socialist leadership. Most of the other enterprises have shutdown, reduced to bankruptcy and collapse.

There are no official statistics regarding the North Korean railway management. But it is safe to say that the national railway is hemorrhaging financially. Energy and fuel are necessary to operate the trains.

Although the North Korean rail system is electrified, it would not be possible to maintain the exorbitant cost of running the trains using income singularly drawn from fixed price freight under the planned economy. The state is required to cover the deficit. But the financially pressed DPRK government does not have the funds to do this. The resulting train delays, route-shutdowns, and general paralysis of the networks are symptomatic of the deeper financial struggles of the state. 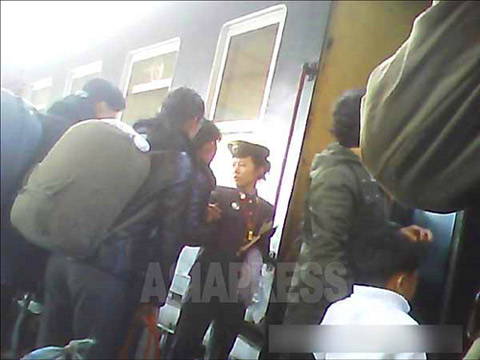 A ticket inspector doing the rounds, checking passengers' tickets and the amount of luggage they have with them. Many station staff and wagon crew earn extra money by receiving bribes for overlooking illegal riders and extra luggage. (Taken by Lee Hung, Hyesan Station, Ryanggang Province. October 2013) ASIAPRESS

The state grades railway workers according to their skills and their assigned work positions. The grades run from second to seventh degree. Each worker's monthly salary differs according to his or her grade.

One of the railway workers told to our reporting partner:

"The lowest is the second grade. The salary for this is 1,080 won. The third grade is paid 1,180 won. Fourth grade workers are 'skilled workers' and are paid 1,300 won. A fifth grade worker earns around 1,450 won, while a sixth grade workers, a 'high-skilled worker', makes 1,700 won. Even the seventh grade worker, someone who has passed the Ministry of the Railway's state examination receives around 1,900. A worker in an ordinary work team is ranked fifth grade at best and there's no advancing beyond this for those individuals."

The current actual exchange rate of the North Korean won at the local market stands at 1,000 won for 12 US cents.

"What's more, our salaries are docked for reasons such as supporting the military, so we don't actually get to keep much at all," the railway employee continued. "We can't buy even 1 kg of rice from this. We end up using this paltry sum for playing cards."

Given that over the last ten years the food rations have been irregular for these workers, how have they managed to support themselves and their families?

Another rail employee explained, "Similar to employees in other enterprises, we've been scratching out a living through private business. But our life has become much harder since Kim Jong-un tightened restrictions."

In North Korea, the state ties employees to their workplaces. Resultantly, any railway workers absent from the workplace for several days for what is discovered to be private business face the possibility of being sent to the labor camp, punished as part of the 'Labor Training Troops'.

[NOTE: Labor Training Troops: a labor correctional facility for those sentenced to less than six months.]

As such, this railway worker told our reporting partner that as his income is so low, his wife engages in some business, (perhaps selling something in the street market). But her business not going well and it continues to be a reach for them to earn a living.

"There are different sections into which railway workers specialize, such as the electric railway units, locomotive units, crewman units, service units and passenger-freight wagon units. The most lucrative are the sections that offer chances to get bribes from passengers. This helps employees make ends meet. But the workers in sections like track maintenance struggle because they miss out on this extra source of income," the employee added. 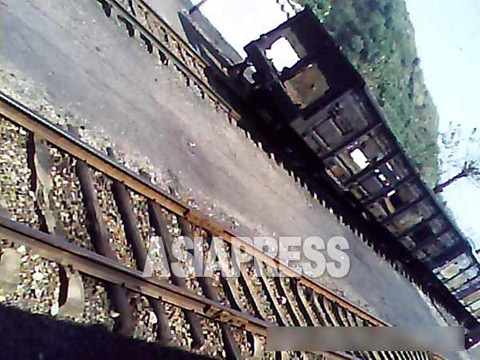 It is common to see dilapidated freight wagons in North Korea. The theft and illegal sale of iron parts taken from wagons by maintenance workers and station staff is widespread. (Taken by Lee Hung, September.2013) ASIAPRESS

In North Korea, the railway is often held up to the public alongside slogans claiming "the railway is the vital artery of the state". However, years of poor operation and frequent power shortages underline the hollowness of these claims. In February this year, the diesel locomotive train were reinstated in some regions in en effort to keep to schedule. The problem with bringing back these antiquated machines, however, is that they are not capable of hauling the same volumes of freight as the electric engines.
Moving freight in North Korea costs more than fifty times the price of an ordinary ticket. It is almost the same cost as the Chinese railway.

The change to diesel locomotives has been seen by some NK watchers as a sign that the market economy is making its presence felt in the North Korean rail system.
However, the treatment of railway employees, with salaries fixed at below subsistence level rates, remains an embarrassment to the North Korean government.