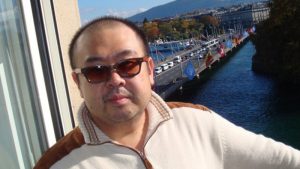 On the late night of February 17, the following day of the Kim Jong-il’s birthday, there was a call from a reporting partner of ASIAPRESS at Dandong City in China. He is a businessman and Chinese Korean.

He said in half-tipsy voice that he would put a person from that side (North Korea) on the phone. A male, seemingly drunken as well, was on the phone with Pyongyang dialect. He explained that they were drinking after a banquet to celebrate Kim Jong-il’s birthday.

He was asked whether they feel strain in North Korea due to the Kim Jong-nam incident. He answered: “Isn’t he that kind of person hanging around women here and there even in overseas during that harsh period of 90s (the famine period)? Isn’t it nice to see one of that family members vanished.” The businessman in trading business from Pyongyang uttered acute condemnation, probably due to his drunkenness.  He didn’t criticize the incident any more. It shows how the people of North Korea see Kim Jong-nam and his family.

Even if the killing of Kim Jong-nam was absolutely a huge international incident, the media go too far. Right after the breaking news on the night of 14th, TVs and newspapers use too much time and sections on the news.

Everyday new figures appeared. North Korean embassy and the Malaysian authority lashed back. North Koreans were identified as the suspects. VX, a deadly poisonous material for chemical weapon was used. It is much like a serial suspense drama. News flash is the pattern that the television boasts.
Related article: Interview with Two North Koreans: Shock and Horror on Assassination of Kim Jong-nam

It is believed that why the incident has drawn so much attention in Japan is because the character of Kim Jong-nam was made as he had often appeared on media. His presence at Akasaka and Shinbashi for drink. “Enlightened Figure” who shed tears because of concern for his people’ lives while criticizing hereditary politics. He showed unexpected aspect as the eldest son of ex-supreme leader of the most reclusive state. The image of Kim Jong-nam in Japan was completed as easy-going and man of common sense with intellect and gentleness. Some even idolized him as “Our Jong-nam.”

However, the image of Kim Jong-nam is quite different from that of North Koreans. Not many ordinary people in local areas know his existence as it has been a secret. But there are many people who had witnessed him directly in Pyongyang.

Han Jong-sik, a defector from Pyongyang, had come across Kim Jong-nam several times: “I had seen Kim Jong-nam several times at Koryo hotel in Pyongyang in the mid-90s. When I was in a restaurant, a group of people were raucous while drinking. I asked to my acquaintance who they were, and was surprised when one of my group whispered to me that the person in the group was Mr. Jong-nam, son of the General Kim Jong-il. I had come across him several times more after that. He usually accompanied a party of similar age and body guards. There couldn’t be anybody who was able to tell him to be quiet since he was the eldest son of Kim Jong-il.”

Paek Chang-ryong, a defector form Pyongyang as well, told a similar story that “ I had seen him at the restaurant, coffee bar in Koryo hotel, and the billiard club near the hotel. Sometimes he was with girls.”

A middle rank official of DPRK Worker’s Party, whom the writer had secretly contacted in China from 2011 to 2012 for the interview regarding the succession issue, told me about Kim Jong-nam: ‘Jong-nam?’ He is a gangster. It is said that he shot wild when he didn’t like something while drinking in a restaurant. He lived a wild life with drinking and women in Pyongyang when victims of starvation were overflown in North Korea at the time. Even Kim Jong-il was upset since nobody could control him.

It is the contempt and criticism on the excessive extravagance and dissipation. The context is the same as the saying of aforementioned businessman from Pyongyang.

Kim Jong-nam eventually left the world by the poison killing. The writer thinks that his life was so unfortunate as to deserve compassion, and had wanted to talk with him calmly one day. The writer prays for the repose of his soul.

However, it is sickening to see that many Japanese media deliver only good image. The point is missed. The evaluation by the North Korean people weighs more than the friendly image made by the media. All the money he spent for his wild life and the business in China came from Kim Jong-il’s pocket. Isn’t it the blood and sweat of the North Korean people? Light can’t reach at the deep ocean current of North Korea that had led to the killing of Kim Jong-nam, had the media covered with sharpness.

* Voice of America released the photos of Kim Jong-nam’s childhood and youth for the first time on its Korean website after the killing of February 16. They show a part of luxurious life of “Royal family.” Lee Nam-ok, a cousin of mother’s side, was taken together. She lives in Europe as an exile.

Facebook Twitter はてブ Pocket Feedly
RECOMMENDATIONS
Was the Incineration of a Shot S. Korean Official in Accordance with Kim Jong-un’s Instructions?
The shocking incident took place on September 22nd. A civil servant i...
〈Photo Report 4〉Inspection At The Metro Station Entrance - "No Shabby Cloths, No Large Luggage!"
<Photo Report>- 4 Inspection At The Metro Station Entrance - "No...
＜Inside N. Korea＞ Hyesan Lockdown Lifted Early Due to Local Reports of Starvation
According to multiple reporting partners, the lockdown in Hyesan, Ryan...
Elderly party members excluded from DPRK Party Conference… Increased surveillance of the population
A reporting partner of ASIA PRESS reported that the first recommendati...
＜Inside N. Korea＞ Missing Medicine: Country on Verge of "Medical System Collapse" due to Rapid Depletion and Blocked Imports of Drugs
◆In addition to the depletion of Chinese products, there is a ban on a...
＜Inside N. Korea＞ Price Plunge: Pyongyang Properties Depreciate Severely as Sanctions Knock Housing Market Nationwide
Apartment prices are reportedly plunging across North Korea in the wak...