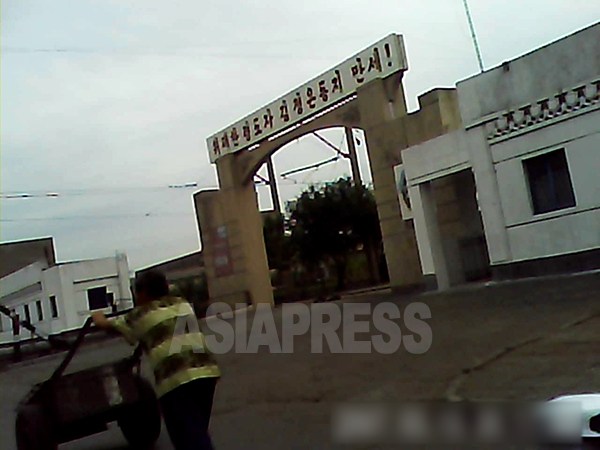 Idolization of Kim Jong-un had rapidly accelerated in North Korea since 2012. Taken on September 2013 at Chongjin City (ASIAPRESS)

The news that Kim Jong-nam, a half brother of North Korean Leader Kim Jong-un was assassinated in Malaysia on 13th of this month doesn’t seem to have yet spread in North Korea, even if most of news media around the world point that North Korea, namely Kim Jong-un is behind the incident. ASIAPRESS contacted two reporting partners in North Korea to ask about the incident through messenger and cell phone. Both of them had no idea at all, and one of them doesn’t even know the existence of Kim Jong-nam. However, on reading the news through the messenger, they responded that Kim Jong-nam’s death is not so surprising thing for them as Kim Jong-un had killed his relative recklessly before. (Kang Ji-won)

Reporting partner A in North Hamkyung Province said in cell phone conversation on February 16: I didn’t have any knowledge about Kim Jong-nam, nor about his death. Maybe others know him, but I think that the people who don’t know him outnumber those who know him. Was he killed because he (Kim Jong-nam) had done a harm to the status of the General (Kim Jong-un) or committed treason? Here (North Korea), the authority can kill anyone who commit a minor error if they want by putting the guilt on.

But he added with shaking voice, “They shouldn’t have killed him (Kim Jong-nam). He is a brother anyhow. The General (Kim Jong-il) didn’t kill Comrade Pyong-il (his younger brother), and dispatched him as an ambassador. It’s scary as he kills his own brother. Our lives are so cheap like flies.

Unlike A, another reporting partner B in Yanggang Province has already known Kim Jong-nam, but didn’t know the murder.

“I could get to know about Kim Jong-nam on listening to the South Korean radio around in 2009 at Hamhung City. There are three sons (Kim Jong-il’s); Kim Jong-nam the eldest, Kim Jong-chul, and Kim Jong-un the youngest. I remember that Kim Jong-nam was arrested in Japan being charged with the fake passport,” said the reporter.

“I’ve read the news (sent by ASIAPRESS), though, it is a sort of pruning. Were there just one or two who died by pruning? The family itself is cumbersome. Jang Sung-thack was executed under the charge of treason and Comrade Kim Kyong-hee’s whereabout is also unknown. There must be fear that the side branch may deprive the throne. There shouldn’t be two Suns in the sky, right? Well, I really don’t know, but (Kim Jong-un) shouldn’t have killed his brother only because he was bothersome,” B strongly criticized.

*Side Branch: It is a word indicating relatives who, as political rivals, may jeopardize the North Korean leader. “Side Branch” was originated to indicate ex-leader Kim Jong-il’s step mother Kim Sung-ae and his half brother Kim Pyong-il after he was designated as the successor of Kim Il-sung in 1974. The followers of “Side Branch” in every field had been purged or eliminated.

Kim Jong-un who, unlike his predecessors, lacks leadership has kept reckless purge on high ranking officials to overcome his complex since his takeover of the power. However, the ordinary people are recently affected as well.

Aforementioned A testified “A man while drinking with friends said ‘the general (Kim Jong-un), a young kid, really know anything?’ and then one jerk informed on him. Two families disappeared instantly. There was a censorship on the workplace they worked and the leading official there was purged. It was a really fuss!”

Criticism on “Killing Brother” may spread in North Korea

Information on the murder of Kim Jong-nam will flow into North Korea from China. The South Korean government started speaking over loudspeakers to inform the murder at the Demilitarized Zone.

Kim Jong-un was criticized morally on the execution of his uncle, Jang Sung-thack in December 2013. While the detail of the killing is not cleared yet, the incident will add the image of brother killer to Kim Jong-un in North Korea. As the ruler, his legitimacy will be greatly damaged.

Facebook Twitter はてブ Pocket Feedly
RECOMMENDATIONS
The Real Coronavirus Situation in North Korea (Part 2): Kim Jong-un Criticizes His Country’s Poor Quarantine System
Turn the clock back about 7 months to when Kim Jong-un made startling ...
＜Interview with a N.Korean＞ How do the N.Korea people think about four years of Kim Jong-un’s ruling? Acid evaluation calling him “a kid”
-How do the people outside of Pyongyang evaluate Kim Jong-un’s rule si...
N.Korean Drug Trade Spreads to Ordinary Citizens (PART1)
2015/Jan/12 Written by PAEK Chang-ryong, a defector reporterThe rapid ...
The Truth Behind N.Korea's Military Parades
2014/May/11 Written by PAEK Chang-ryong, a defector reporterParticipat...
＜Photo Report＞ Priority on Construction of Guard Post To Prevent Defection-Not yet for flood victims (5 Photos)
2016/Nov/17 There was a huge damage on several cities and rural area ...
〈Photo Report- 8 (a) 〉 The Best Department Store in Pyongyang - But the Products on the Shelves are Not for Sale (1)
2013/July/02 Report byGu Gwang-ho(Original Report - Sep, 2011) Everyon...