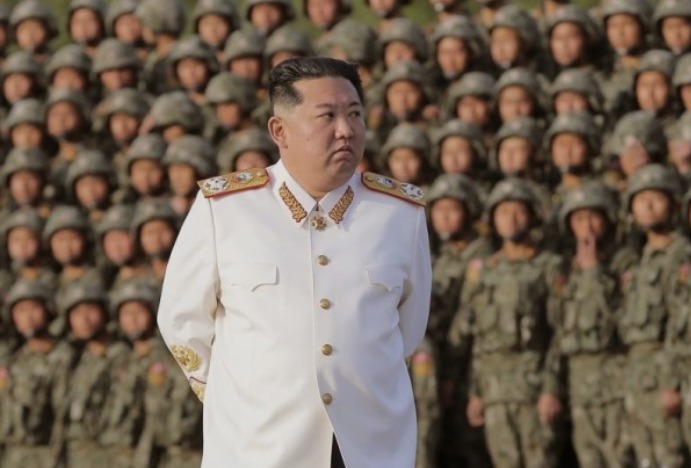 Kim Jong-un in a white military uniform during the military parade held the evening of April 25. The country boasted that the parade was the largest in history. (Rodong Sinmun)

In April, North Korea continued to launch missiles as it had since the beginning of the year and conducted a massive military parade to celebrate the 90th anniversary of the founding of the Korean People’s Army. The country faces international sanctions, and its borders are still on lockdown as part of more than two years of overreaching efforts to prevent the spread of COVID-19. These measures have led to the incapacitation of the economy and plunged its people’s lives into desperate straits. What do people think about their government spending enormous amounts of money to put on a military parade? ASIAPRESS interviewed two North Koreans in the northern region of the country to find out more. (KANG Ji-won, ISHIMARU Jiro)

◆ People aren’t thinking because of information controls and grinding poverty

The two North Koreans who spoke with ASIAPRESS live in an area near the border with China. ASIAPRESS used Chinese cell phones smuggled into the country to communicate with them. “A” is a businessman in his 40s.

——Did you see the military parade?

A: Yes, we were all ordered to watch the military parade on TV, so I saw it. Has there really been any major changes? I don’t really care. It’s just hard making a living right now.

——The Pyongyangites in the video of the military parade looked healthy. Are there differences between the lives of people in the provinces and those in Pyongyang?

A: Pyongyang is the country’s capital so people there receive rations from the government. I’ve heard that all the supplies coming in from China through Sinuiju go to Pyongyang. That being said, I’ve also heard there are a lot of people having hard times in the capital city.

※ North Korea restarted international train service in January of this year, two years after the service was suspended due to COVID-19. Sinuiju is the only official route of trade with China.

——North Korea is facing economic sanctions and the COVID-19 pandemic is putting even more strain on the economy. What is the reason the regime has spent so much money launching missiles and holding a massive military parade?

A: The reason is to show the world that now matter how much pressure our enemies can put on us, we can survive, and that we can win if we fight back. All those things are to show that we are still alive and well.

——What do you think about North Korea’s efforts in that regard?

A: The government said during the military parade that it will strengthen its independent defense capabilities even further, but that doesn’t mean that we will be able to receive rice and other supplies from other countries or the UN. I know what’s going on outside of North Korea, and I know that the (military parade and missile launches) do not help anyone in the provinces. They are meaningless.

—— What do people around you think about what’s happening?

A: There are people here who say that Kim Jong-un is a great leader and that he is bravely going up against the US and the superpowers. They also praise him for his ability to see into the future despite his young age. They just don’t know the truth. I doubt these things every time I hear them.

The government claims that our lives are desperate and difficult because of the American imperialists, but people who only hear propaganda without getting information from the outside world end up praising Kim Jong-un.

——So, your saying that the controls on information allow people to just believe what the government is saying?

A: The government claims that we have nuclear weapons and missiles so we can win a war, but there are people who talk among their friends about when the country’s food shortages will end.

——In March, North Korea claimed to have succeeded in launching a ballistic missile, the Hwasong-17.

A: There were people who doubted that happened. The government has long claimed that it has the ability to strike the American mainland, so why are they saying now that they have succeeded?

If the US threatens us, we must prepare for the possibility of war. I get that. However, the important thing right now is for the people’s lives to get better, but the government isn’t doing anything about that. I don’t expect that it will.

Next Page： ◆ Most people don’t care about nuclear weapons or missiles
1 2
Facebook Twitter はてブ Pocket Feedly
RECOMMENDATIONS
＜Inside N. Korea＞ Signs of Starvation: Farmers Forced to Survive off of Potatoes as Regime’s Unreasonable Quotas Leave Them with Nothing
There are signs of starvation in rural areas in North Korea. Designate...
Interview with a Trader from Pyongyang (PART2)
(Interviewed by ISHIMARU Jiro, editor in chief - Rimjin-gang) 2015/Mar...
＜Inside N. Korea＞ Cremations for Cash: Residents Relocate Tombs as Regime Rakes in Profits
According to reporting partners in North Hamkyung and Yanggang Provinc...
＜Inside N. Korea＞ Missing Medicine: Country on Verge of "Medical System Collapse" due to Rapid Depletion and Blocked Imports of Drugs
◆In addition to the depletion of Chinese products, there is a ban on a...
Female Workers Stage a Walkout En Masse
2015/May/28 ISHIMARU Jiro, editor in chief - Rimjin-gang KANG Ji-won, ...
＜Photo Report＞ Female Soldiers in Miserable Conditions: Seven Years of Military Service Starting at 17 Years Old.
2017/Jan/24 Parents, whose daughters will graduate from high school, ...