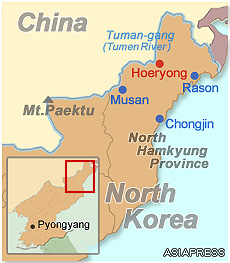 The majority of all houses are state property, belonging to the social collective unit. As such, selling, renting, and collecting any kind of financial reward on such properties is forbidden. However, in recent years, the state is no longer able to supply houses to fill the people's demands.

During the course of the severe economic hardships that gripped North Korea during the mid-1990s, people were faced with the reality that they had to sell whatever they could to survive.

For many, the sale of houses offered a much-needed source of emergency capital. As a result, a 'housing market' gradually appeared, both in the urban and rural areas of North Korea. This report reveals the reality of the underground housing market in the country's northern city of Hoeryong. 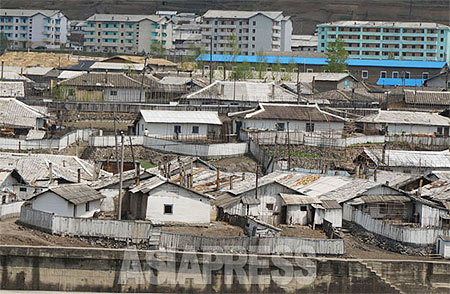 Densely packed houses in a neighborhood in Hyesan, Ryanggang Province. This photo was taken from the Chinese side of the Amrok-gang (Yalu River). [May. 2014]  ASIAPRESS

"At this time, in North Korea, most of the houses [in this area] are the on the housing market. To sell a house, it is necessary to obtain a 'house occupancy certificate', which is an official document permitting occupation of the house. This is because most houses are state-owned property,"
Park explained.

Those who want to sell or buy a house, pay a bribe to public servants in these units, and transfer names registered on the occupancy certificate. Usually the seller prepares this arrangement for the transferal.

Additionally, besides the government housing policy, some state institutions are selling apartments or single-family houses as a means of earning money. These are also ostensibly registered as state property. 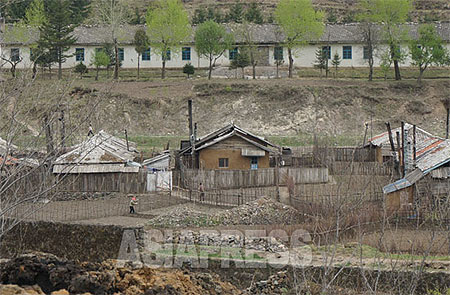 On the outskirts of Hyesan, a single-family house with a small garden for growing crops can be seen. [May. 2014] ASIAPRESS

Pyongyang - Escalating prices of 'public model houses'
Housing originally allocated by the state is also subject to trading. With the exception of the capital, Pyongyang, there are almost no new state-run housing projects currently underway. Because of this, the residential occupancy rights of residences allocated at the time when the socialist distribution system was functioning are also up for sale. In rural areas, the state does not have the budget for building new public residence. Most of the newly built homes are managed by related institutions to the Party or government, and sell these houses to earn hard currency. In other words, newly built homes are the investments of those in power and are circulated in the North Korean 'housing market'.

Of course, the housing trade in North Korea also exists in Pyongyang. According to a Korean man living in Japan, who recently traveled to Pyongyang to visit relatives, an 'occupancy certificate' of 'Mansdae Street sector', designated as a 'public model house of the Military First era', was worth between $10,000 to $20,000 (U.S) when construction begun in 2008. Now completed, however, the price has escalated to around $90,000 - $110,000 (U.S). This is currently the most expensive housing property in Pyongyang.

In the 1990s, a high-class apartment in Pyongyang and other large cities was known as the '10,000 dollar apartment'. Now the cost of these urban dwellings has ballooned to almost ten times the original '10,000 dollar' price tag, while it is not unusual to see '$30,000 apartments' in regional cities. The price, as might be expected, depends on the upkeep of the house, while location desirability, in terms of proximity to a station or market, also adds value.

House trading in a farming village
Reporter, Park Chan-u reports on the housing market in some of the rural villages:
"In some of the villages around Hoeryong city, the price of a normal, single-family house, with dimensions of 280 square yards (234 m2), including a garden, is sold at around 20 million won (approximately $2,500 US dollars). The price for an occupancy certificate for an apartment is around the same. If the house is in a less desirable location, shows signs of shoddy workmanship, or requires additional repairs to such basic facilities as the heating system, the price comes in a little lower, at around 8 million won for a place with dimensions at around 160 to 200 square yards (134 - 167 m2).

Recently, Park visited a farming village far outside the boundaries of Hoeryong city when he heard there was a property on sale.

"It turned out to be a one-story house of 200 square yards, which included a small garden for growing crops (an authorized private garden which permits cultivating products for market as a source of extra income). The house was in pretty good condition. The price was 5 million won. If a house is close to the market, the standard price in this region is around 15 million for 280 square yards, even in a rural area outside the city."
<* 10,000 won = around 1.25 US dollars/ Rate of early March 2014 in Pyongyang. >

Reporting partner Park further explained about the value of homes located close to a market:
" The reason is simple. If the house is close to a market, it is easier to engage in any kind of business. Furthermore, it might not even be necessary to get involved in business yourself, it's possible to earn good money by merely storing the luggage of merchants."

Park told us that the currency used for the housing trade is not only Korean People's won, Chinese RMB and US dollars are also common.

According to the testimonies of several North Korean defectors, houses around a market are almost like a transit warehouse. They sometimes function not only as merchant's storage facilities, but also as a junction for middlemen engaged in petty commerce.

Regarding the authorities' crackdowns on the housing trade, Park explained:
"Because a large amount of money changes hands between house dealers, it's not unusual that the Security Station (police station) or the State Security Department (intelligence service) accuse such individuals of real estate trading and launch crackdowns on the accused. But these allegations can be put to rest by bribing the officials or exercising the right connections. From the very beginning, it's almost impossible to join the housing trade if you are unable to call upon such contacts."

In recent years, the North Korean authorities have been forging ahead with large-scale construction campaigns such as the Masikryong Ski Resort and Munsu Water Park in a bid to further demonstrate the greatness of Kim Jong-un. However, their interest in raising national living conditions seems almost non-existent.

The state is not focusing enough attention on catering to the growing demand for housing. This has resulted in widespread illegal real estate trading and corruption. Now we see real estate in obscure farming villages near the Sino-North Korean border becoming subject to the trade, with individuals in this area able to buy and sell a house by going through these unofficial channels.
***Rimjin-gang

Facebook Twitter はてブ Pocket Feedly
RECOMMENDATIONS
＜Inside N. Korea＞Discharged But Disgruntled: Former Soldiers Wreak Havoc After Being Sent to Cooperative Farms
This spring, soldiers who were discharged from the People's Army and ...
＜Inside N. Korea＞ Expansion of the market economy as the driving force behind social transformation--based on sources from inside N.Korea. (PART4) Marketization leads to rapid development of the transport system. by ISHIMARU Jiro
2016/Dec/22 3-2 The emergence of a marketized transport system The ma...
N.Korean Workers' Party Imposes Tough Measures to Maintain Discipline
- State accelerates social mobilization for loyalty to Kim Jong-un 201...
＜Inside N. Korea＞ Growing Radicalization of People's Control (2): The Return of "Word Hunting"…One Word of Complaint Can Result in Arrest or Banishment
In North Korea, there are strong indications that "word hunting" is b...
＜Inside N. Korea＞ “You Must Shoot Anyone Stealing the Harvest": Live Ammunition Distributed at Cooperative Farms For 24/7 Guard
Since mid-September, North Korean authorities have ordered all cooper...
〈Photo Report- 8 (a) 〉 The Best Department Store in Pyongyang - But the Products on the Shelves are Not for Sale (1)
2013/July/02 Report byGu Gwang-ho(Original Report - Sep, 2011) Everyon...