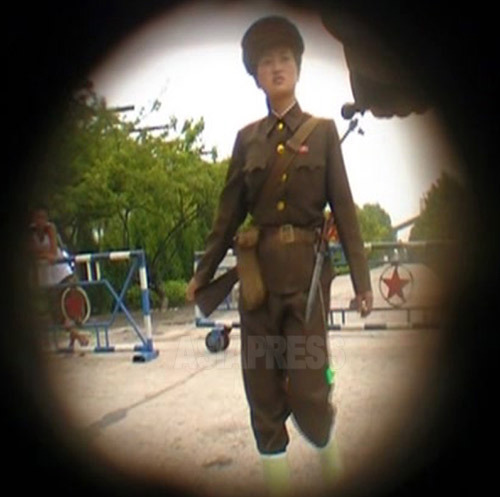 A woman guarding military facilities inside a factory area in South Pyongan Province. She is carrying a rifle and wearing a bayonet on her belt. The absence of epaulets indicates that she is likely serving in a militia such as the ‘Worker-Peasant Red Guards'. Taken by Kim Dong-cheol in August 2009 (ASIAPRESS)

◆Women assigned to infantry units due to shortage of troops

The length of military service for women in North Korea is currently known to be five to six years. Multiple reporting partners in North Korea met with military officials from the local military mobilization office near the end of 2018 to investigate.

In North Korea, all residents, except those who have not passed the physical examination or those who have been admitted to a university, must join the Korean People's Army after graduating from senior-middle school at the age of 17. Though enlistment is officially voluntary, it has been mandatory for men for quite some time.

In the past, women had only enlisted by choice. However, a reporting partner said, "A person’s education status and family background are considered, but the system is semi-obligatory in effect."

The lack of troops in the Korean People's Army is a serious issue. The cause is the famine that began in the mid-1990s. Many children, including infants, died from starvation, and those who survived suffered from extreme cases of stunted growth due to malnutrition. Even in the 2000s when the famine began to wane, more and more people began to give up having children because of financial struggles. This so-called "famine generation" now makes up the entire People's Army.

In response to the decline in enlistment, military service was extended during the Kim Jong-il regime and the conscription of women increased. The period of service was 11 years for men and 7 years for women in 2014. "They say you will be conscripted as long as you aren’t missing any fingers or toes," said the reporting partner.

As discontent grew among parents, the period of service was officially shortened to 10 years for men and 5 years for women in 2015. However, because of the shortage of troops in highly specialized areas, including tank and ship piloting and aircraft maintenance, discharge is delayed by one to two years for such personnel who are difficult to be replaced.

"Female soldiers were originally assigned to anti-aircraft, communications, and nursing units, but now they are sent to infantry units because there aren't enough male soldiers. Moreover, mixed-gender units have disappeared in recent years due to the increase in pregnancy, desertion, and malnutrition," said the reporting partner who conducted the investigation.

Malnutrition has become widespread among female soldiers as a result of poor quality rations. It is not uncommon for them to experience absence of menstruation, and sexual abuse by superiors has been a problem for a long time.

"Parents try to avoid the conscription of their daughters by giving bribes and sending them to university or vocational schools," explained the reporting partner. (Kang Ji-won / ISHIMARU Jiro)

※The "military mobilization office" is a division under the Recruitment Bureau of the Ministry of People's Armed Forces that is responsible for military service related work.
※ASIAPRESS contacts its reporting partners by bringing Chinese mobile phones into North Korea.