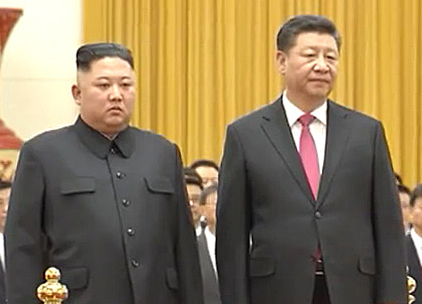 Since mid-January, the North Korean authorities have been ordering citizens to refrain from criticizing China through ‘Inminban Meetings,’ according to multiple reporting partners in the North. (Kang Ji-won)

Kim Jong-un visited China on his birth, January 8, which was a secret to the public. Just before his departure, the North Korean authorities had sent orders through the inminban (local political units) to ban the sale and consumption of Chinese ‘Yang-vale’ sausages. A reporter from North Hamkyung province explained the situation as follows.

“After an incident in Pyeongseong where a child who ate ‘Yang-vale’ sausage died, imports were halted and orders came down banning the sale or consumption of the sausage.”

‘Yang-vale’ is a popular meat product that sells for about 2 yuan (331 South Korean won) per piece. Whether consumption of the sausage was actually responsible for the death of a child in Pyeongsong is unknown but it is certain that the incident farther damaged the reputation of Chinese food amongst North Korean consumers.

For the last 20 years, however, North Korea has had little choice but to import low-quality food from China, as the country lacks the capacity to produce processed foods at required levels and does not have the purchasing power to import food from elsewhere. Public confidence in Chinese food being imported to North Korea is especially low, as the public is keenly aware that the products are of such low quality that they could not be sold in China.

In mid-January, however, the government’s ban on ‘Yang-vale’ products was reversed and citizens began to receive surprising orders at local political unit meetings.

According to the local reporting partner, “These new orders banned us from speaking ill of China in any way, including spreading rumors about defective Chinese food products.”

The reporting partner continued, “Only until recently, the authorities were also criticizing China by saying ‘China is joining the US to block our economy’ and ‘to not have any illusions about China’. So what’s with the change in attitude? They are telling us to fix our own attitude towards china now so I guess it must mean that relations have improved.”

Even if, to the outside world, there appears to be no signs of discord between China and North Korea, anti-Chinese sentiment within North Korea certainly remains. North Korean citizens have been taught by the government for generations that “if Japan is a 100 year-old enemy, China is a 1,000 year-old enemy”.

So, despite the government’s recent shift in attitude, anti-Chinese sentiment amongst the general public is not going anywhere.

It is not uncommon in North Korea to hear derogatory expressions used to describe the Chinese people that North Koreans come into contact with. One might hear, “Those Chinese traders and tourists that come here are poor” or “Those bastards think only of themselves”. North Koreans recognize the futility of the situation though, frequently saying, “Our country is poor so we have no choice but to be close with them”.
Next page: Humiliating flattery for China…