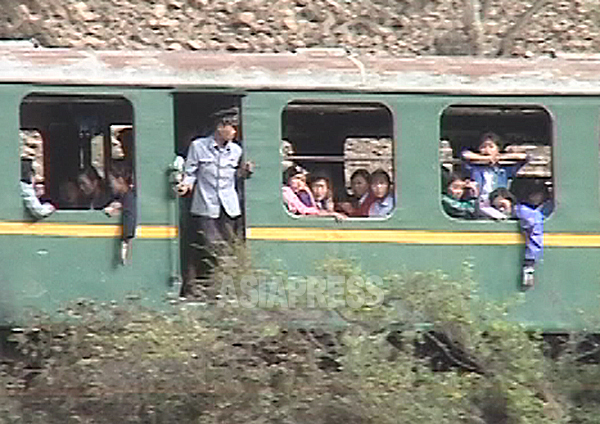 (Reference picture) Train stopped due to a power failure. Poor facility maintenance is the biggest challenge for the railway. Photographed from the Chinese side by ISHIMARU Jiro, August 2002

◆Economy does not improve- despite talks

A South Korean delegation entered North Korea by road on July 20 in order to carry out joint inspections on a possible railway to connect the two countries. On April 27, Moon Jae-in and Kim Jong-un declared the Panmunjom Declaration, which called for linking the two countries through railways and roads. To accomplish this, a basic inspection is now underway.

The North Korean people are also interested in connecting the North and South by rail. Our partner in northern part of the North said:

"Despite the various talks that have been held following the inter-Korean summit meeting, the government has not been able to improve the lives of ordinary people. There are a lot of people who think that the railway could be a good thing.”

Since the Panmunjom Declaration was made public through the North Korean state media, the North-South railway connection is not a "secret" issue. Therefore, people are aware that it is fine to talk about the issue in public places and so freely discuss the topic in markets and other public gatherings. Below is a summary of what our partner tells us is brought up in these public discussions.

◆Will rice and aid be transported?

The opinions of the citizens who are optimistic about the coming-and-going are as follows:

"If the railroad goes ahead, average North Koreans will be able to visit South Korea.”

"If they say people cannot come and go, then why connect the railway? It’s so people will be able to go to the South."

"Anyone who receives the trust of the government will be selected to take a tour of the south."

"Like the Kaesong Industrial Complex, it will bring much tourism and investment."

Meanwhile, there are some pessimistic views that can be heard as well. They are summarized thusly:

"If our people go to and from South Korea, as they will abandon socialism, the authority would never allow it”

"Even if the North-South railway is connected, people will not be allowed to freely use it and it will surely only be use for transporting goods. (South Korea) would send rice or other material support but also take North Korean minerals and sell them on at high prices."

One can sense that these citizens expect the economic benefits from the South to come through the connected train. (Kang Ji-won)

Facebook Twitter はてブ Pocket Feedly
RECOMMENDATIONS
＜Inside N. Korea＞ Quarantine Collapse: Residents Rediscover Taste for Cut-Price Pork as Black Markets Boom
While South Korea and China ready themselves against the possibility o...
＜Inside N. Korea＞ Military Cuts (Part 2): Frustrations Rise Amid Forced Deployment of Discharged Soldiers to Farms and Coal Mines
The Kim Jong-un regime has decided to drastically reduce the number of...
＜Photo Report＞ Kotchebi, the Homeless, Under the Kim Jong-un Regime (PART5) Toddlers and female Junior High School students roaming around a city. Some children have lost their legs.
2017/Jan/10 These pictures of “Kotchebi”, the homeless, were taken by...
＜Inside N. Korea＞ Rumors of Outbreak Spread: Was a Trade Official Executed for Trying to Escape Quarantine?
◆ Warning: Those who violate state measures shall be dealt with accord...
Rimjin-gang - Periodic Report(2011-Feb-09)
I am the chief editor publisher of Rimjin-gang, Ishimaru Jiro. The Rim...
＜Inside N. Korea＞ Checkpoint Barley: Farmers Frisked for Grain as Authorities Secure Shrinking Food Supply for Government and Army First
Since mid-September, “grain checks” have been carried out across the N...
Polling Stations Under 24 Hour Surveillance As The Station's Notice Boards Vandalised
The Forthcoming Election in North Korea: 2014/March/07 Written byISHIM...
Voice of the ordinary N.Koreans: “Nuke test only brings hardship to people,” “No better life in Kim Jong-un’s era”
Asia Press has covered the inside situations and responses of North Ko...
＜Inside N. Korea＞ Hyesan Heist: Police Search for Stolen Military Data, Suspect Inside Job
In late May, police in Hyesan City, Ryanggang Province, began a massiv...
The Firing Squad Executions of N.Korean Entertainers - N.Korean State's Crackdown on "Political Videos" (PART1)
2013/November/17 ISHIMARU JiroNews of The Firing Squad Execution case ...