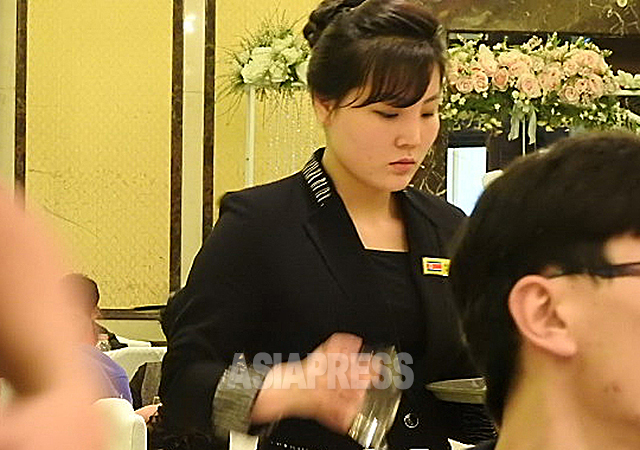 A North Korean woman working as a server at a hotel banquet hall in Yanji, China. The event was for a Korean-Chinese couple’s wedding. Her pin is decorated with the flag of North Korea. Photographed in October 2017 by ISHIMARU Jiro

In a 2019 report, the US State Department claimed that North Korea dispatches 100,000 workers annually to work overseas, earning $500 million per year. The exact number of workers and revenue earned is unknown but, what is for certain, is that maintaining this source of foreign currency revenue is vital for the regime in order to make up for its massive trade losses. With this understood, UN Security Council sanctions, which have brought North Korea’s trade revenues crashing down, are also aimed at blocking North Koreans from working overseas.

However, North Korea is still managing to dispatch laborers to foreign countries- primarily to China. This cohort of North Korean workers is mostly composed of women employed by Chinese factories and restaurants. ASIAPRESS conducted an investigation in China to understand the situation and asked reporting partners in North Korea to give insight into the state’s process for selecting laborers to be dispatched overseas.

■ An overview of the situation for workers dispatched to China

First, let’s review the contents of the UN Security Council sanctions regarding the North Korean practice of dispatching laborers overseas.

As stated previously, the exact figures regarding North Korean overseas workers are unknown. Private organizations have estimated the total number of workers to be somewhere between 30,000 and 120,000 people, while Korean media estimates put the number somewhere between 50,000 and 100,000. It is known for certain, however, that the top two destinations for overseas workers are China and Russia.

Let us first take a look at the situation for North Korean workers dispatched to China. Most of this group are employed in factories, either sewing clothing and producing shoes, while the second most common field of employment is in the restaurant industry. According to a survey of several companies in the Jilin and Liaoning provinces, the average monthly wage paid by Chinese companies between 2017 and 2019 was between 2,000 and 2,500 RMB for clothing manufacturing plants and 2,500 to 3,000 yuan for restaurants. (2,500 RMB is worth roughly 350 US dollars).

So, how much money does the North Korean regime make by sending workers to China?

It is estimated that these female laborers ultimately receive about ⅕ to ⅓ of their wages. If a laborer receives ⅓ of their 2,500 yuan wage each month, she will only receive for herself an equivalent of 116 US dollars each month. If this is the case for 50,000 North Korean laborers, then $69.6 million will be pocketed by the regime each year. Extending the estimate to 100,000 North Korean laborers, we can calculate that the regime rakes in $139.2 million annually from the practice. This is a massive contribution. For reference, revenues from North Korea’s 4th strongest export, iron ore, stood at $74.41 million in 2016, the year before the UN Security Council sanctions were tightened.

North Korean trading companies hand the wages of overseas laborers over to agencies in Pyongyang. Due to the strict financial sanctions, however, this must be done by bringing large amounts of cash over the border into North Korea or, alternatively, the money can be left with trading partners in China to cover payments for imports.
Next page :■ China’s Autonomous Region of Yanbian welcomes North Korean workers...