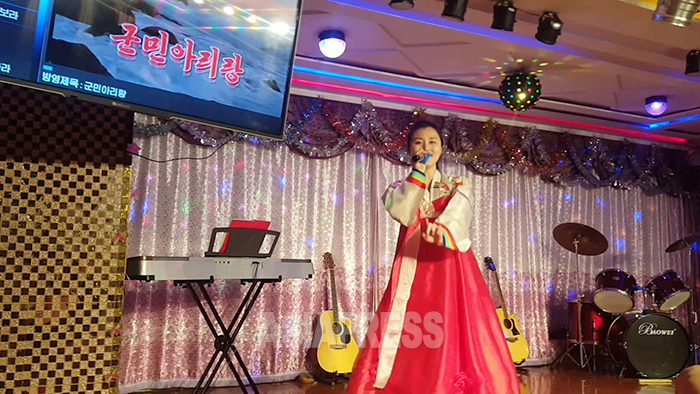 North Korean workers in China are mostly employed in manufacturing plants and restaurants. One may imagine the “North Korean restaurants” famously operating overseas, with their North Korean staff performing songs and dances in traditional dresses. It is more likely, however, that the majority of North Korean women are instead employed by restaurants in Chinese hotels.

Northeast China, where there was once 1.9 million ethnic Koreans, has recently seen a massive exodus of the Korean-speaking population. Of this group, 600,000 now live in South Korea, while between 50,000 and 100,000 now live in Japan. In addition, many have migrated to the larger Chinese cities of Beijing, Shanghai, and Dalian. As such, there are now far fewer young, ethnic Koreans in Dandong, Shenyang, and Yanbian Autonomous Region. With a rise in tourism from South Korea, there is now a huge demand for young, diligent, Korean-speaking workers. It is no wonder then, that North Korean women are welcomed by local industries.

North Korean women working in China live as groups and are forced to maintain the “organizational activities” they would normally participate in back in North Korea. In late fall of 2017, I spoke with a female employee working for a mid-sized hotel in downtown Yanji. When the hotel’s restaurant closed at 11 p.m., about 25 female employees gathered at the entrance of the hotel in winter clothes before departing together, walking in a row. Following the group, I watched as, 15 minutes later, the women entered an old block of apartments. Waiting in front of the hotel the next morning, I saw the group return just after 8 a.m., walking to the entrance in the same formation.

In September last year, I ate a meal at the “North Korean Restaurant” of Dandong, China. There were about 20 customers and the waitresses looked fairly relaxed. My Chinese partner was acquainted with one of the waitresses and called her over to speak with us in an empty room.

The waitress said, “It’s been 5 years since I came to China at the age of 22. My visa has expired but the manager tells me to stay here. I can’t go outside and I want to go back to Pyongyang to see my family. I don’t know when I will get to do that. My passport was left to the manager shortly after my arrival in China. At the restaurant, we hold weekly political ideology study sessions and self-criticism sessions. There is an officer of the North Korean secret police who is in charge and he records our individual behavior. Only North Korean broadcasts are allowed on the TV.”

During the investigation, I found no cases of dispatched North Korean laborers engaged in prostitution.
Next page :■ The response of Chinese authorities to sanctions...

Next Page： ■ The response of Chinese authorities to sanctions
1 2 3 4
Facebook Twitter はてブ Pocket Feedly
RECOMMENDATIONS
[PHOTO REPORT] Winter, people strive to overcome the water crisis by drinking river water
2015/June/08 Report: Team Mindeulle Edit: ISHIMARU Jiro, Editor in Chi...
〈Photo Report- 6 (a)〉 The Government's Command is for a "Strong and Prosperous Nation" -- but Workers Tired Out at Pyongyang Construction Sites to Build 100,000 Apartments
2013/June/17 Report byGu Gwang-ho(Original report:Aug, 2011) In the ca...
What happened to the 93,000 Zainichi Koreans who returned to North Korea?
"I saw a dark and strange-looking cloud rising up in the distance and ...
＜Inside N. Korea＞ "Show me your texts and photos": Strict Censorship of Cell Phones Comes with Threat of Death Penalty
The Kim Jong-un regime is censoring the country's cell phones with unp...
cover page
cover page               Rimjin-gang - News From Inside North Kore...
＜Inside N. Korea＞ Ban on privately operated restaurants
North Korean authorities have suspended the operation of private rest...