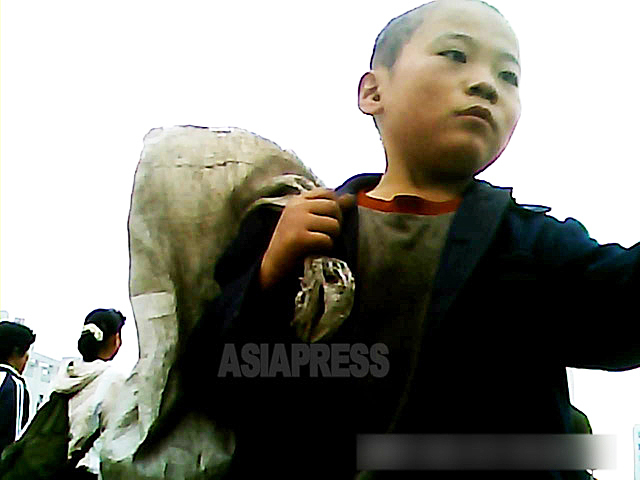 (Photo) A boy wanders the streets carrying a sack. Photographed in Pyeongseon, South Pyongan Province, in September 2013. It is said that many such children can be seen on the streets of North Korea. Photographed by ASIAPRESS

In North Korea, where the economy is rapidly worsening due to the effects of the coronavirus, vulnerable groups are facing a humanitarian crisis. Reports from across the country point to an increase in the number of kojebi (homeless children), beggars, prostitutes. In addition, many are leaving their lives in the city to forage and plant vegetables in the mountains. Orphanages are facing difficulties as well, with even those sponsored by Kim Jong-un unable to properly provide meals to their charges, many of whom have run away. Average North Korean citizens are also facing extreme difficulties. (Kang Ji-won / ISHIMARU Jiro)

With the help of reporting partners in North Korea, ASIAPRESS surveyed the living conditions in the country, investigating from June to early July in Sinuiju, Hyesan, Musan, Hoeryong, and Chongjin.

In every city surveyed, there were reports of a noticeable increase in the number of kojebi and beggars congregating at markets and railway stations.

“There are more adults than children begging at the markets. They’re not dressed in rags so they’re not homeless. The number of elderly beggars has increased in particular. The authorities do not crack down on the begging and leave them alone, saying ‘If we place them under arrest, we won’t be able to feed them.’” (Sinuiju City)

“There are many of kojebi in all of the markets. They only ask for small sums of money but most people ignore them. This is because everyone is having a hard time and can’t afford to spare any change. There are less jobs going around for those who usually make their cash income by carrying cargo to and from the markets. All they can do is fight between themselves for the few jobs.” (Cheongjin City)

◆ The situation facing the urban poor

A reporting partner who sells clothes at Hyesan market on the border with China said the following about the business situation:

“Since the border was sealed off, Chinese products have not made it to markets and, with movement of people and goods controlled to decrease the risk of coronavirus infection, there are no jobs transporting and unloading cargo. The factories and mines have almost all halted operations. Everyone is having to make do with a severely reduced cash income. There are many days when I come to market but can’t sell any clothes because, in times like this, food comes first.”

“There are more vendors than customers in the market these days. When a customer does come by, all the merchants compete for their attention. Hyesan is a distribution hub for Chinese products to be sold on to other cities, so it is not doing as badly. Cities in the south are said to be doing much worse.”

North Korea’s food distribution system all but collapsed in the 1990’s. Food and other rations are currently distributed to just the Workers Party, government agencies, and to priority state-ran companies. With no rations provided, most residents are therefore forced to secure food and other necessities for themselves.

However, as previously mentioned, many people have lost their source of cash income due to the economic impact of the coronavirus. This quickly created a crisis for vulnerable groups such as the elderly, widowed, and disabled. In addition, many parents could no longer support their children, leading to an increase in the number of kojebi.

“In May, when fertilizer for cooperative farms was brought in by train, there was chaos as poor people, including adults and children, attempted to steal it and sell it on to merchants.” (Hyesan City)

“Last year, among market traders, there were about 10% who were living hand to mouth. This year, I think it is about half. Gathered at the market they say, ‘If it goes on like this, we will starve to death.’” (Cheongjin City)

On the other hand, markets are not facing food shortages. According to reporting partners, grains, potatoes, and food are in high supply at markets. However, as people have less cash, they are favoring corn and potatoes over the more expensive white rice.
NextPage:  ◆ Married women going into prostitution and people foraging in the mountains as a last resort…

Next Page： ◆ Married women going into prostitution and people foraging in the mountains as a last resort
1 2
Facebook Twitter はてブ Pocket Feedly
RECOMMENDATIONS
＜Article Contribution＞ Why does Kim Jong-un keep launching missiles? Exploring the Truth and Objectives (2) Weapons developed very quickly but mass production will prove difficult
North Korea conducted another ballistic missile test on January 30. Th...
＜Inside N.Korea＞ Real Evaluation On Kim Jong-un By His Own People
2017/May/1 While I have worked in journalism specialized in North Kor...
Revision of Task and Treatment for Police Officers Launched - The State Increases Its Control Over People
2013/September/12 Written by KANG Ji-won, a defector reporterIt has be...
Rumors of Jang Song-taek's "fall" already spread in N.Korea
2013/December/04 Written by PAEK Chang-ryong, a defector reporter.Peop...
＜Interview with inside N.Korea＞ Ordinary N.Koreans have, “No Interest” and “No Expectations” about the Worker`s Party Congress -Only Hope Is “Opening up N.Korea”
The 7th congress of the DPRK Worker’s Party finally ended on May 10. H...
＜Inside N. Korea＞ High school students enter farm fields to steal crops to survive…Government officials check whereabouts of students who miss class
Amid the rise in North Koreans in urban areas suffering from poverty d...