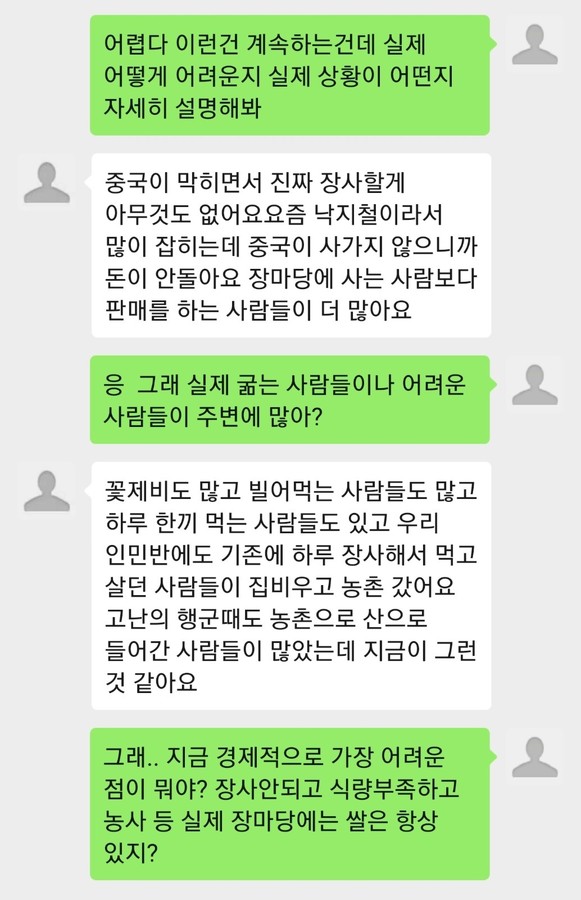 Messages exchanged in late June with a reporting partner living in North Korea. Photographed by ASIAPRESS

Across the country there is an increasing number of people who are giving up their lives in the city to forage and plant vegetables in the mountains.

A reporting partner in Hoeryong City said, “A couple that I know were earning a living by transporting cargo with a handcart. But, as business slowed down and there was no cargo to transport, they sold their handcart and housewares. They bought vinyl sheets and went into the mountains [to plant vegetables]. It’s just like when there was the famine of the Arduous March.”

A similar report came from a reporting partner in Sinuiju.

“There are many people who dispose of their housewares, buy vinyl sheets and potato seeds, and go into the mountains to clear space for a field. For city people, going into the mountains is the last resort. It was a phenomenon that occurred during the famine in the 1990's. Now it's happening again."

In addition, a growing number of women are being forced into prostitution due to worsening economic difficulties. It is not just young, unmarried women but married women as well who make their way to the cities for sex work. According to a reporting partner in Sinuiju City, "the authorities would normally crack down on prostitution very strictly but, recently, police have been letting these women off if they are caught." It is said that this is because the police are unable to provide meals to those that they detain."

In April, the North Korean authorities began surveying neighborhoods to determine each household’s level of poverty. A reporting partner in Hoeryong City described the authorities’ efforts as follows:

“According to the authorities’ survey of one inminban (local political unit) in the Kumsaeng Labor District, 39 of 69 households were determined to be extremely poor. Most of these households had been supported by people working in the marketplace or transporting cargo for a living. The results of the survey, however, were not used by the authorities to support these households directly. Rather, they were used to collect financial support from other residents.”

◆ Running away from Kim Jong-un’s orphanages

More and more children are running away from orphanages as, according to a reporting partner speaking from Hyesan in July, meals were still not being properly provided.

From around 2014, Kim Jong-un ordered the construction of orphanages around the country, starting in Pyongyang. In the North Korean system, children are split according to age and taken care of in facilities known as nursery schools, elementary academies, and secondary academies. Brought in off the streets and markets, the kojebi are forced to adapt to organizational life.

What prompted Kim Jong-un to order the construction of the orphanages was the Japanese and South Korean reporting on smuggled video footage of kojebi in North Korea. As the orphanages were built under the direct orders of Kim Jong-un, the facilities were generously provided with white rice and snacks. Provincial governments were in charge of administration and the financial burden was placed on government agencies and local state-run companies.

However, the economic turmoil caused by the coronavirus has made it difficult for these institutions to continue bearing the costs.

According to the reporting partner in Hyesan, “the ‘secondary academy’ of Ryanggang Province is an excellent building constructed near the Hyesan University of Technology. However, there are more and more children running away from the institution. It is said that out of the original 150 orphans, there are only about 60 left. They can sleep outside in the summer, so they are homeless and spend their days begging. I don’t think they liked the strict rules of organizational life.”

In North Korea, it can be said that there is a “coronavirus economic crisis.” What’s different from previous economic recessions is that the epidemic measures have almost entirely halted trade, investment, and tourism from China. In addition, domestic distribution has ground to a stop, dealing a heavy blow to the fragile, young market economy.

Until the coronavirus pandemic in East Asia truly subsides, the North Korean economy will continue to face immense difficulties.