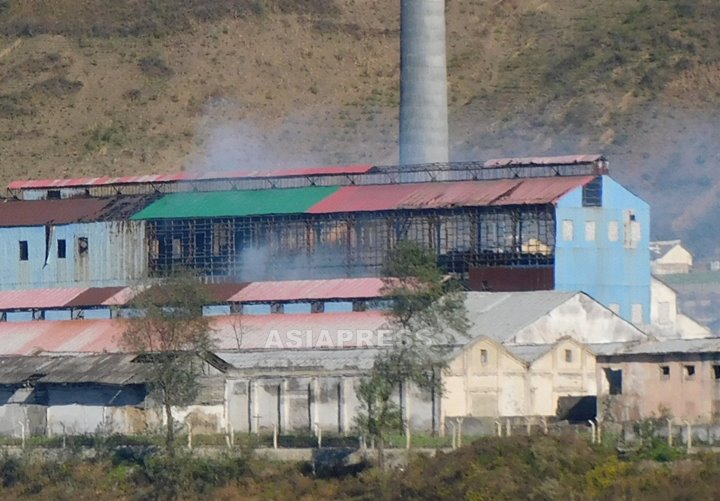 66 A building of an abandoned chemical factory in Sakju County, North Pyongan Province. Photographed from the Chinese side in October 2021 by ASIAPRESS.

North Korea's financial woes have worsened, with state agencies and state-run companies running out of cash and unable to pay for goods or salaries. With the inability to print banknotes, the government is trying to replace them by issuing money coupons referred to as “Tonpyo”, but there is massive confusion. (Kang Ji-won / ISHIMARU Jiro ).

"It seems that our country is finally running out of cash."

This information was reported frequently and from all over North Korea starting around the end of August. These reports said that the cash flow of government and party agencies, state-owned enterprises, and factories have deteriorated to the point where payments are overdue, and banks are no longer accepting cash payments or remittances.

In response to the financial difficulties, the Kim Jong-un regime introduced temporary money coupons (Tonpyo) from the Central Bank of the Democratic People’s Republic of Korea with a face value of 5,000 won. In early September, South Korean media obtained a photo of the "Tonpyo" and reported on it.
※5,000 won is about 1.09 USD at the prevailing exchange rate on October 21.

Many Korean experts analysed the sudden issuance of the "Tonpyo" as a way of absorbing foreign currency from the market. This is because, in the past, money coupons have been issued exclusively for the exchange of foreign currencies. There was also speculation that the "Tonpyo" was issued to support impoverished people.

However, as we conducted our research in North Korea, we discovered that, in reality, the issue was more about rescuing cash-strapped state institutions, state-owned enterprises, factories, and banks. Mr A, a reporting partner who lives in the northern region, explained as follows.

"Although rumours began to spread in mid-September that 'Tonpyo' was circulating in and around Pyongyang, I didn't see it in person until early October. Then, as companies and factories began to make payments and settlements using "Tonpyo," it appeared in the market. However, merchants are wary and try not to accept them. Even though the government says, it is the same as regular money, who would believe that? We've been fooled too many times before. I'd rather barter."

Another reporting partner, Mr B, who lives in another city, commented as follows.

We asked two other reporting partners to look into the issue, and they assured us that the "Tonpyo" has no function in foreign currency exchange and that there is no evidence that it was given to the poor.

So why did Kim Jong-un's regime issue the temporary "Tonpyo" instead of supplying currency? "An official explained to me that paper and ink were no longer coming in from China, so they were temporarily printing with domestic products," said Mr A, our reporting partner.

"I wonder how much money the country has if it can't even import paper and ink for banknotes. The authorities claim that 'Tonpyo' is 100% domestically produced, but the quality is poor, and it looks like ordinary paper," said another reporting partner, Mr C.

Foreign currency difficulties have made imports from China difficult, and it is believed that paper and ink for printing banknotes have dried up.

The newly issued temporary money coupon "Tonpyo." The photo was provided by a North Korean defector who obtained it.

◆Enterprises in a slump

The leading cause of the state-owned enterprises’ slump is the significant drop in trade due to the blockade of the border with China in response to the coronavirus. Companies that had depended on China for raw materials saw their operations decline or suspended. Exports to China, mainly of consignment-processed products and minerals, have also come to a near halt.

In addition, due to excessive anti-corruption measures, the movement of people and distribution of goods within the country have been strongly restricted. Hence, people have had less cash income and less purchasing power. The functioning of the market has shrunk drastically due to the inability to produce and sell goods. And the distribution of goods among businesses is sluggish, with settlements not being made properly.

Our reporting partner explained the current situation as follows.

“Exports to China have stopped, and much of the business-to-business trade has disappeared. The only factories that can operate, even at a snail's pace, are those that sell their products to merchants in the domestic markets. They must buy what they need for production in cash at the market. But neither the companies nor the government has money. I think that's why they printed 'Tonpyo'." (Mr A)

"I talked to the accountants of some companies, such as steel mills, and they said that they have been using banks to handle accounting transactions, but they can no longer send money because they don't have enough money in the bank." (Mr C)

"The existing won bills are circulating among individuals. Since people don't trust the state-run financial institutions, the money is only going to the 'Dongju' (emerging wealthy elite), and the banks are not functioning." (Mr B)

◆Growing Distrust of the "Tonpyo"

The city has already begun to consider "Tonpyo" as a cheap imitation of money and avoid using it. Mr B described the current situation as follows:

"People laugh at 'Tonpyo,' so there are money changers who buy 5,000 won tickets at a discount of 3,800 won or 4,000 won in cash. They bring it to companies and institutions that still have cash and use their connections to exchange it for cash and make a profit. Since the release of 'Tonpyo' and the realization that there is no money in the country, more and more people think that they must hold on to RMB or US dollars at all costs."

The authorities appeared to have panicked and started flirting with the idea of punishing those who turn ‘Tonpyo’ for profit. According to Mr A, an official who came to a people's group meeting made the following announcement.

"Although the 'Tonpyo' is being issued temporarily due to the current difficulties, it is guaranteed by the government to have the same value as cash. When the COVID-19 pandemic is over, the borders will be opened, and money production will be normalized, so the 'Tonpyo' will be collected. Those who spread rumours that it is of poor quality or that it will be turned into scrap paper in the future, or those who exchange it at a discount, will be caught and punished."

There is no doubt that the Kim Jong-un regime's finances are deteriorating to the point that it is having trouble issuing currency. Moreover, the side effects of the excessive coronavirus measures are intensely apparent.

In addition to the information contained in this report, ASIAPRESS has obtained a document covering the use of ‘Tonpyo’ issued by the Workers' Party in October which is designated "top secret.” ASIAPRESS will report on the details of this document shortly.

＜Related Article＞
Facebook Twitter はてブ Pocket Feedly
RECOMMENDATIONS
＜N.Korea photo report＞A Look at North Korea's Impoverished Rural Women... Though they are producers they live in poverty due to exploitation
While North Koreans are very compassionate, there is one occupation th...
＜N. Korea＞ “Pour Shit in his Snout...Pres. Moon is a Dunce”: Profane Propaganda Documents Reveal Extent of Regime’s Hate Spreading Efforts
ASIAPRESS recently obtained an internal document of the Korean Workers...
Inside The Book 〈Table of Contents〉 JPEG SAMPLE IMAGE
Table of Contents Preface: To the Readers of the English Edition of Ri...
With time running out for the aging families of Japanese abductees, the Abe administration must lay out a roadmap for settlement talks with North Korea (ISHIMARU Jiro)
January 12 marked the 59th birthday of Keiko Arimoto (有本恵子), a Japanes...
＜Inside N. Korea＞ Soaring Food Prices Cause Market Chaos: Elderly and Poor Starve as Price of Corn More Than Doubles
Grain prices have soared in markets across North Korea, causing major...
〈Photo Report- 6 (b)〉 "Strong and Prosperous Nation" - The State Project to Build 100,000 Apartments in Pyongyang for the 100th Aanniversary of The Birth of Kim Il-sung
2013/June/18 Report byGu Gwang-ho(Original report : Aug, 2011) <&lt...