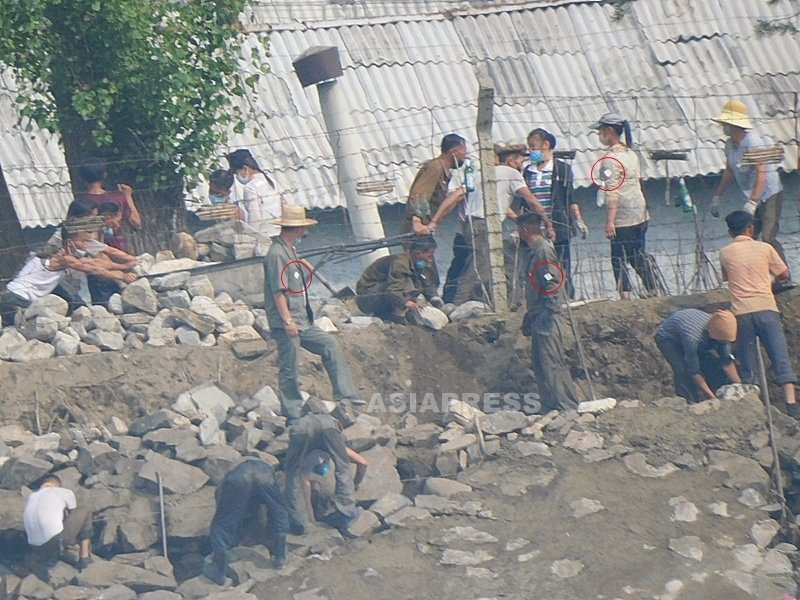 A scene of the construction of the Yalu River embankment. The people are considered to have been mobilized from workplaces and women's organizations. The photo was taken from the Chinese side of the North Pyongan Province in mid-July 2021 (ASIAPRESS).

◆ Raw material supply halted and exports suspended due to coronavirus

In North Korea, where the economic downturn is worsening due to the Chinese border closure in response to the coronavirus pandemic, the treatment of workers has deteriorated as factories and businesses fail to operate properly. As a result, many workers are resigning or leaving their jobs after receiving little to no salary or rations. The authorities and factories are trying hard to hold onto employees, but they are losing control (Kang Ji-won / ISHIMARU Jiro).

There is a large clothing factory in Rason, North Hamkyung Province, located along the northeast border with China. As a joint venture with investment from a Chinese company, raw materials and sewing equipment were introduced from China, and various types of uniforms, sportswear, underwear, and coats have been produced on consignment and exported to China. The factory boasted more than 2,000 employees, most of whom were women.

Economic sanctions imposed by the UN Security Council on the country's nuclear and missile programs in late 2017, however, banned the export of garments, and the joint venture was soon dissolved. Nevertheless, the factory continued to produce garments and, with the state's approval, smuggled them into China through the upper reaches of the Yalu River with the help of a trading company. However, the smuggling operations have stopped since the Kim Jong-un regime blocked the Chinese border due to the COVID-19 outbreak.

When our reporting partner asked a female worker at the factory in early October, she explained the current situation as follows.

"The factory has been operating with scaled-down production for the domestic market. We have been consuming the raw materials (fabrics and threads) left by our joint venture partners in China, but this supply has been decreasing, and now we are only producing clothes for the wholesale and retail markets. The factory has since start the practice of sewing done by individuals. But, since the factory used to be operated mainly through mass production, the quality of the products is much lower than those produced elsewhere. Moreover, there is no prospect of raw materials being replenished, so the future of the factory is uncertain."

In this clothing factory, the workers received 15 kilograms of white rice and 5 kilograms of soybean oil as payment in kind every month and sugar on holidays thanks to the consideration of the joint venture partner in China.

“There has been no food or other supplies for the past six months, except for a five-day supply in early September. As a result, the production line is almost at a standstill, and the women workers have been put into mobilized labour assigned to the factory by the government,” said the female worker.

It is assumed that they are being sent to support farming operations on farms and to construction sites.

Recently, several women workers have been leaving the workplace as their treatment deteriorates. Many of them are retiring or changing jobs through the excuses of marriage, job transfer, relocation, or illness. The real reason is that they can't live by "working for free."

The authorities have been panicked by the situation and have intervened with the management to ask for production to continue. In response, the factory tried hard to stop the turnover by warning that those who quit would not be able to re-join the company even if trade resumed, but it was ineffective.

“This clothing factory used to be a popular place for women to work, but now the number of workers has been dropped by about half," said the reporting partner.

In the past year or so, research conducted by ASIAPRESS shows that many factories in at least North Pyongan Province, North Hamkyung Province, and Ryanggang Province have stopped or suspended operations. Companies that have been dependent on China for raw materials have been hit particularly hard.