The North Korean military is supported by paramilitary "Civil Defense". These consist of the Worker-Peasant Red Guards(로농적위대), the Instruction Corps(교도대) and the Young Red Guards (붉은청년근위대). Collectively, they are estimated to comprise of 3.5 million personnel.

Frequent anti-aircraft drills are carried out in preparation for an enemy attack. Our North Korean reporting partner from North Hamkyung Province reported that the state is currently reorganizing these units on a large scale. 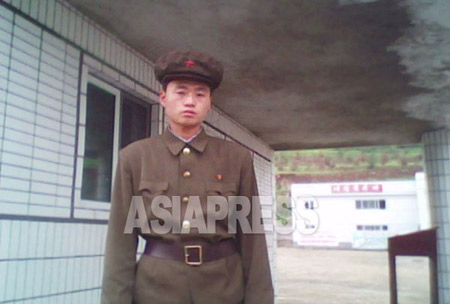 A member of the "Worker-Peasant Red Guards" stands in front of the entrance to a state run enterprise. (Taken by Kim Dong-cheol, South Pyongan Province, October 2010.) . ASIAPRESS

According to the reporting partner there are two major points for the reorganization. Firstly, the expansion of the anti-aircraft units commonly operated by female militia. Male militia will now join these units. Our partner explained:

"At the railways there used to be two sets of around 12 person anti-aircraft platoons positioned in several departments and tasked with defending against an enemy air raid. The number of troops in this position is set to increase in size to four platoons. Furthermore, the anti-aircraft troops will be excluded from the Civil Defense. Instead they will be nested under the direct command of the Department of the People's Armed Force."

Further, the state is replacing the anti-aircraft guns currently in use with a new model:
"The old air-craft gun had four wheels but it was poorly balanced. The new gun has two wheels but it is far more stable. It's much better than the old one," the reporting partner added.

Another reporting partner, in North Hamkyung Province, explained the purpose of this reorganization:

"Following the inauguration of Kim Jong-un, in the political lectures at every gathering of the Korean Workers' Party or in workplaces in North Hamkyung Province, it was repeatedly impressed on attendees that they should not become complacent about China. It seems that this reorganization and reinforcement of anti-aircraft troops is being carried out with the state's eyes set on China. It's a reflection of the wariness felt towards North Korea's neighbor."
*** Rimjin-gang