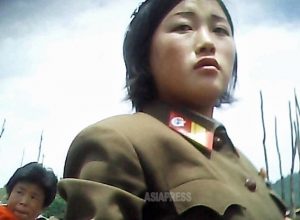 (Reference Photo) A soldier in an alleyway market. She is a noncommissioned officer. Taken by Mindulle at Hyesan City of Yanggang Province, June 2013. (ASIAPRESS)

A number of parasites were found in the stomach of the North Korean soldier who recently defected across the Joint Security Area on November 13. Why would an elite solider be afflicted by parasites? ASIAPRESS investigated. (Kang Ji-won/ISHIMARU Jiro)

It is not unusual for North Koreans to ingest parasite eggs, because farmers continue to use human manure to fertilize their crops.

During the chaotic period of the 1990s famine it was harder to acquire parasiticides, the substance used to kill parasites inside the host. But what’s the situation now? A reporting partner in a northern area of North Korea investigated:

“People can buy a parasiticide, called ‘Albendazole,’ in the market. One pill is 0.5 Chinese Yuan (KRW 81). It seems to work fine. The medicine, unloaded at Nampo port, was supplied as aid by the U.N. Anybody can buy it from private medicine traders (who acquire it through illegal means). Another is a China-made parasiticide, called ‘Anthlemintic.’ One pack is 1.5 Yuan (KRW 246).”
Related article:＜Instant Interview＞ Even North Korea’s Elite Soldiers Carry Parasites

-A number of parasites were discovered during an operation to save the life of the recently defected North Korean soldier. Don’t they supply parasiticides to the military?

“Well, it’s hard for me to say, but it may not be of help to supply the military with this medicine. They would likely sell it all! These days, soldiers in the North Korean military struggle to feed themselves, and manage to make ends meet by selling supplies (to traders). All medicine supplied to them finds its way into the markets through traders.

-Is the food situation in the military that bad?

“The military is in a terrible condition. Female soldiers, to whom the military supply sanitary pads, sell them in the markets. They do this because they’re hungry. The officers may or may not use parasiticides, but the soldiers tend to sell them.” 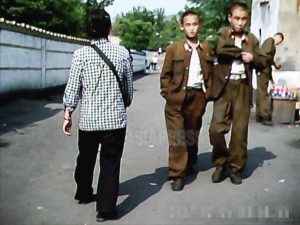 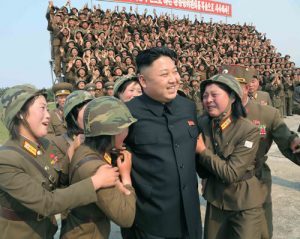 I’ve been told that this photo shows female soldiers weeping, moved by Kim Jong-un’s visit. He uses pictures like this quite often. Quoted from the photo of April 24, 2014 by Korean Central News Agency

Facebook Twitter はてブ Pocket Feedly
RECOMMENDATIONS
Kim Jong-un's Birthday Not Marked on the 2014 Calendar
2013/December/30 Written by PAEK Chang-ryong, a defector reporter.It w...
＜Inside N.Korea＞ Expansion of the market economy as the driving force behind social transformation--based on sources from inside N.Korea. (PART6) Collapse of the food rationing system weakened control over the people. by ISHIMARU Jiro
2016/Dec/27 5 Social transformation caused by the expansion of the ma...
＜Latest Report on N.Korea＞Another year of emaciated soldiers in N.Korea; Young Soldiers suffering with Malnutrition (Four Photos)
In late July, a reporter for ASIAPRESS was on a cruise ship on the Ya...
＜Inside N. Korea＞N. Korea takes issue with high school students taking videos of kissing, dancing, fighting, and harassing the homeless
North Korean high school students have long taken videos and pictures ...
＜Inside N. Korea＞Military Cuts (Part 1): Military service for men cut from 13 to 8 years... What are Kim Jong-un's intentions?
According to a research conducted by our reporting partners living in ...
＜Inside N. Korea＞ “No Soap but Many Broken-Down Cars”: The Reality of Life Under the Paralyzed COVID-19 Economy
◆Chinese Products have disappeared from the market In North Korea, it’...