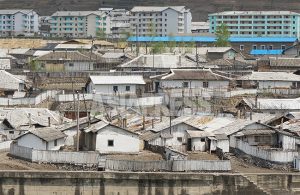 A house in North Korea’s Hyesan City, just across the Yalu River, a stone’s throw from China. People in the border region prefer detached houses to apartments, because North Korean apartments often struggle with power shortages and intermittent running water. Taken by ASIAPRESS in May 2014.

ASIAPRESS reporting partners in Hyesan City, Yanggang Province reported that work to tear down houses and public buildings along the Yalu River that divides North Korea from China is in full swing.(Kang Ji-won)

In a telephone conversation on October 30, a reporting partner at Hyesan City reported, “Houses within 50m of the border were demolished and construction of apartments started in Hyesin-Dong and Hyegang-Dong [suburbs of the city]. People who used to live in the now demolished houses are either temporarily staying in other peoples’ houses, as directed by the local Inminban (Neighborhood Unit), or with relatives.”

*Hyesin-Dong and Hyegang-Dong are located in the center of Hyesan City.

On the same day, another reporting partner also said, “Yesterday I tried to meet my acquaintance at Kangan-Dong, but I struggled to find him as the houses along the river have all been pulled down.”

*Kangan-Dong is suburb of Hyesan City, 1 km away from the city to the north.

ASIAPRESS Reporting partner ‘A’ further explained in regards to the ongoing construction in the area: “The state supplied the materials. The would-be tenants should also work even though the 618 Dolgyokdae (Shock Troops) are supposed to be mobilized. The construction work goes in stages, from 1, to 2, and then completion in stage 3. The first stage is taking place in Hyesan-Dong, the second in Weeyon. 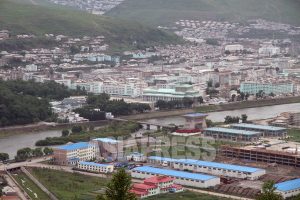