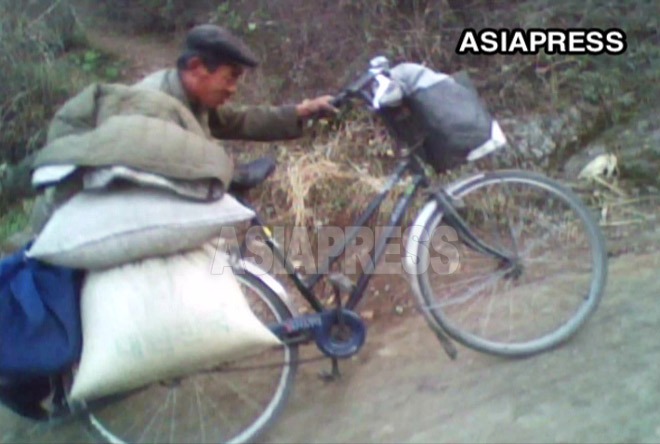 (Photo) A man on a bicycle carries food purchased in a farming village on a bicycle. He makes money by reselling the food to urban markets. Photographed by Kim Dong-chul, South Pyongan Province, October 2010.

Since mid-September, North Korean authorities have ordered all cooperative farms across the country to prevent the theft and outflow of harvested food, and farming villages have been put on high alert. In addition, fields, warehouses, and roads leading to farming villages are guarded around the clock by armed personnel. The aim is to prevent harvested grain from being absconded and sold at markets before it can be delivered to the state (Kang Ji-won / ISHIMARU Jiro).

The harvest of the country’s staple food, corn, which began in early September, is now complete, while potatoes and soybeans are still being harvested, and rice harvesting is underway. Threshing, drying, and finalizing production continues at cooperative farms across the country. The harvested food can be roughly divided into the following categories:
1) Food distributed to farmers
(2) Food to be stocked by cooperative farms
(3) Food paid to the state
(4) Food for the military known as "Military rice"

(3) and (4) are "state-owned foodstuffs" to be supplied to the Party, the administration, the police, munitions factories, Pyongyang citizens, the army, and other groups essential for the maintenance of the regime.

The authorities usually intensify their crackdown every fall to prevent “state-owned food" from leaking out of farms. The purpose is to prevent theft in warehouses and fields and avoid the flow of food to markets through traders. This year's security is said to be much stricter than in previous years. At the beginning of October, our reporting partner in Ryanggang Province reported the following.

"The crackdown is terrible. 'Every grain of food is state property. Anyone who messes with it will be legally punished without mercy,' the authorities announced. The authorities have formed a security unit consisting of discharged military personnel assigned to the farms and have even mobilized the Labor and Agriculture Red Guards' militia to provide 24-hour security. The security bureau (police) distributes live ammunition at 5:00 p.m. and collects it at 7:00 the next morning. We were told that we could shoot thieves."

The most important thing to watch out for is grain theft by city dwellers. The reporting partner continued.

“People from the city who are tired of living in the town come to the farm, but the road to the farm is heavily guarded, and there are coronavirus quarantine checkpoints, so they take the mountain road to get to the farm and steal. So, traps and boards with nails are set along the mountain route. The other day, some people were caught stealing unripe soybeans and selling them.”

The authorities are having a hard time dealing with grain theft by students and pupils. The damage is severe because students of all ages- from elementary and junior high school students to university students- are constantly entering the fields and stealing. The Workers' Party of Korea has taken note of the problem and has instructed each organization to come up with a plan to 'stop students from stealing crops.'

The markets are also being affected. Even though the harvest is over, the prices of corn and other grains have hardly fallen. This is because the inflow has decreased.

“When we sell our produce at the market, we have to notify the market administration where the produce was harvested. We are asked to explain where our corn came from, even though we are simply selling boiled corn," said another reporting partner.