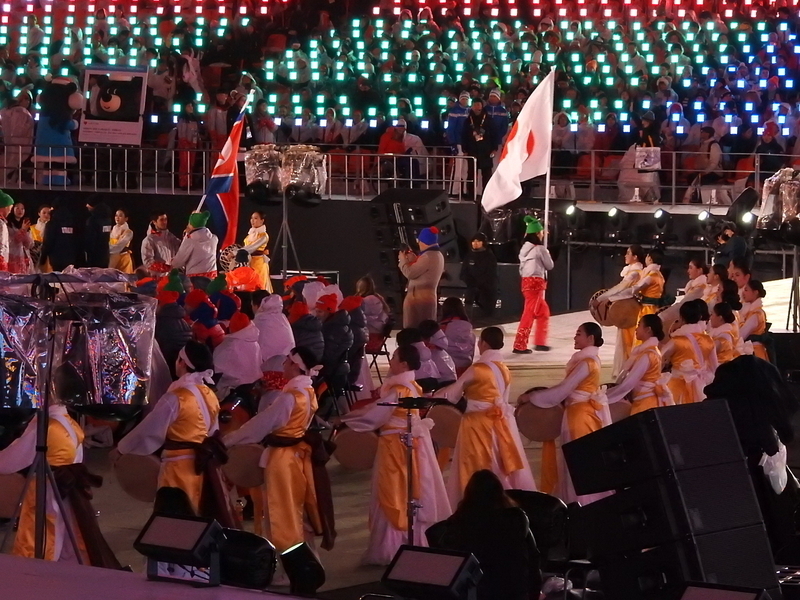 An unusual sight in South Korea as the North Korean and Japanese flags are seen side by side. Taken at the closing ceremony of the Pyeongchang Winter Olympic Games by ISHIMARU Jiro, February 2018

In 2018, the Kim Jong-un regime made its first steps toward improving inter-Korean relations as politicians, government officials, business leaders and performers made numerous trips between Seoul and Pyongyang. In sports, the athletes found common ground as the two countries came together to participate as one. A unified women's ice hockey team competed in the Pyeongchang Winter Olympic Games, while other joint teams were formed for the Asian Games and World Table Tennis Championships.

When unified Korean sports teams were first formed, the public was curious to find out how well the young athletes would perform together for the first time and how they would interact after being formed as a single team on very short notice. The North and South Korean athletes had not only cultural differences to work through but even a difference in sporting terminology. In North Korea, passing in basketball is referred to as "contacting" and serving in table tennis is called "thrusting in".

Watching the sports competitions on TV, one could easily distinguish between the North and South Korean female athletes on the unified team.  The South Korean athletes wore makeup and were quite stylish, with most having long, dyed hair. The North Korean athletes, meanwhile, had black, short hair and wore no makeup.

The North Korean athletes acted quite differently to their Southern teammates as well. On the surface, they seemed very cautious and passive in their behavior. As it was most likely their first time meeting South Koreans, one can only wonder what was going through their mind. To learn more, I asked a North Korean defector who had previously worked in sports.

◆Teammates ordered to surveil each other

"They were nervous. Athletes and coaches always undergo ideological training before departure. If you display 'excessive kindness' toward South Korean athletes and officials, you may be criticized later for being 'ideologically corrupted'. You may be accused of spying if you pass on letters and goods without authorization, and you are suspected of attempting to defect if you walk around alone. There are always Ministry of State Security agents (secret police) among the delegations. Also, there are athletes and coaches who are given orders to surveil others. Even the athletes don’t know who they are," said the North Korean defector.

Even with such controls in place, the young North Koreans’ memories cannot be erased. Last year, in the field of sports alone, there were probably more than a hundred North Korean athletes, coaches, and officials who came into contact with South Koreans. They gained the opportunity to learn about South Korea and the rest of the world and were finally able to evaluate their own society in relative terms. The more inter-Korean exchanges, the better.

Next page: Increase in inter-Korean exchanges followed by 'adverse effects'…

Next Page： ◆Increase in inter-Korean exchanges followed by 'adverse effects'
1 2
Facebook Twitter はてブ Pocket Feedly
RECOMMENDATIONS
N.Korean Reporter, LEE Jun story
Many North Korean refugees live in hiding in the Chinese border city o...
＜Inside N. Korea＞ Kim Jong-un Regime Orders Emergency Import of Medicine: Many Dead due to Collapse of Medical Care Under Coronavirus Restrictions
To cope with the shortage of medicines, which has been worsened by the...
Annual Compost Collection Mobilization Frustrates Population
2015/March/17 Report: Kim Dong-cheol, North Korean reporter, Rimjin-ga...
＜Inside N. Korea＞Robberies, Violent Crime on the Rise: Discharged Soldiers Suspected of Impersonating Police to Mug Citizens
Crime is on the rise across North Korea. In particular, there has been...
＜Inside N. Korea＞ Signs of Starvation: Farmers Forced to Survive off of Potatoes as Regime’s Unreasonable Quotas Leave Them with Nothing
There are signs of starvation in rural areas in North Korea. Designate...
＜Inside N.Korea＞ Kim Jong-un’s popularity on the rise
North Korean leader Kim Jong-un’s popularity is on the rise, according...