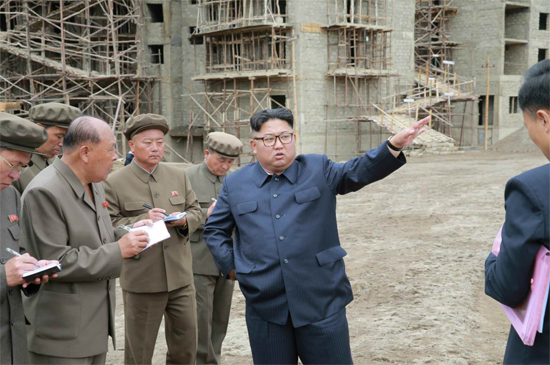 It has been reported that donations are being requested from a large number of residents in order to secure funds for the construction of the Samjiyeon Special Tourist Zone, a project that is being pushed by Kim Jong-un. If a large enough amount of money is donated, even criminal sentences can be reduced. Although struggling to raise funds, the Kim Jong-un regime is aiming to complete the construction at all costs. (Kang Ji-won / ISHIMARU Jiro)

"The authorities are encouraging donations for the Samjiyeon construction project. There was a case in which one million won (about 105 USD) was paid to have a family member’s sentence at a correctional labor camp (prison) reduced by three years. Also, a 48-year-old individual by the name of Kim, who was sentenced to death for human trafficking, had a 12-year sentence shortened and was released in September after family members donated five million won (about 529 USD).”

※In North Korea, on the Day of the Foundation of the Republic (September 9), a nationwide special pardon is issued and convicted criminals can have their sentences reduced by three years.

Next page: Shortage of funds due to economic sanctions...

1 2
Facebook Twitter はてブ Pocket Feedly
RECOMMENDATIONS
＜Kim Jong-un Regime＞ Cash Grab: Dictator Orders Crackdown to Confiscate Foreign Currency During Coronavirus Trade Crash
◆ Authorities intervene in the foreign exchange market Since the end o...
＜Inside N. Korea＞ Order to Abolish All "Hidden Fields": Farmers Fear Starvation as Ban Begins
The North Korean authorities have ordered the abolition of all privat...
Cold Response from Residents to Chairman Kim Jong-il's Death ? Steep Jump in Food Prices
2011/December/20 Written by ISHIMARU Jiro, Report by Choi Gyon-ok"(We)...
The Weakest Won: Markets Run Entirely in Chinese RMB as Shoppers Abandon their Sanctions-Hit Currency
On August 6, the exchange value of the North Korean won took a massive...
Jang Song-thaek enraged Kim Jong-un: Reason of Purge found on Photos (part2) Jang Song-thaek was executed for the violation of the sole leadership system
Analysis of North Korean Media ISHIMARU Jiro, editor of Rimjin-gang, P...
＜Inside N. Korea＞ Why is Hunger Getting Worse in June? “Malnutrition has made it impossible to go to work, and some have died from eating wild plants”
The impoverishment of North Korean is getting worse. It has been 1 yea...
＜Inside N. Korea＞ Authorities Ordered to House More Homeless, Internal Documents State, as Economic Paralysis of Coronavirus Worsens
The economic decline in North Korea is getting more and more serious. ...
Peddlers Carrying the Future of N.Korea on Their Backs
The Daily Life of North Koreans: Peddlers Carrying the Future of North...
＜Latest Photo Report＞ Scenes of North Korea Captured by Super Telephoto Lens (2) People Trapped in a "Cage” of Their Own Construction [ISHIMARU Jiro]
North Korea continues to stubbornly maintain its “national isolation”...
＜Photo Report＞ Abandoned Elderly (PART3) Collapsed Social Welfare System Has Left the Elderly on the Streets.
2016/Oct/3 In Japan a growing number of people have become concerned ...