2013/August/09
Speaker： GU Gwang-ho, Rimjin-gang reporter
Editors：ISHIMARU Jiro, LEE Jin-su
（All the information in this article is as of November 2011）

Losing the Struggle to Survive Leads to Suicides and Homeless People

Q: Is there poverty in Pyongyang? Are there any people so poor they are starving?

Gu: Even in Pyongyang, there are suicides by people who lose the struggle to survive. They have no means of making a living. Once you run out of money, you sell your TV or clothes or chest of drawers or other household goods. After you have sold everything off, then you have nothing to exchange for food. Those kinds of people commit suicide. One family had nothing more they could do, so they decided to have one last feast then die. So they went to the Jangmadang and bought rice and meat and other foods on credit and feasted on it, then mixed rat poison in the final dish and ate it. But they didn't die. That's because the rat poison they had bought was fake. They weren't able to die, and from the following day they just had more debt. There was a family like that in my neighbourhood.

Q: Are there any kotchebi (homeless people) even in Pyongyang?

Gu: Yes, there are. During the day, they cannot walk the streets. That is because they will be caught immediately and taken away. So at night after dark, they wander around for example around the station. In the regions they are left as they are, but things are different in Pyongyang. If you are caught begging dressed in rags, you will be sent to a kotchebi detention camp. This happens in the suburbs as well, not just in the central part of the city. So the kotchebi in Pyongyang are careful about their appearances. 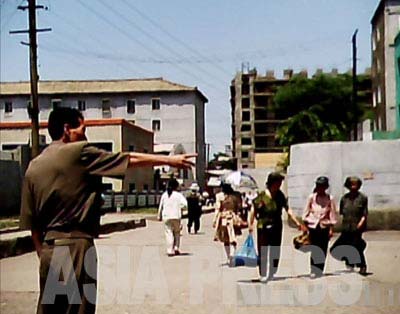 The authorities are zealous about cracking down on street side vendors. This photo shows a local municipality officer (left) driving street sellers away. In the central part of the city, they usually crack down on vendors on the main streets or near publicly-run markets, but during events that attract large numbers of foreign visitors safety officers (police) are called in to make sure no buying or selling is allowed at all even on the back streets.( June 2011, Moranbong District, By GU Gwang-ho) ASIAPRESS

The High Net Worth Class = the Privileged Class

Q: Which districts in Pyongyang are home to the high net worth individuals or senior executives?

Gu: There is a dense population of the rich and well-off living in the Chung, Potonggang, and Mangyongdae districts. Many are workers at the centre (at the Party, the government, military, etc.), employees at trading companies, and senior executives. These people live a good life thanks to their position in the state. But the people who are living well in the regions are often people who make money thanks to their skills and abilities, who have succeeded in business. In other words, being well off in Pyongyang means you are a member of the privileged class. There is a really big gap between the privileged class and the others, even though they are all residents of Pyongyang. The ones who ride a Mercedes and live in gorgeous homes live a life of luxury that is beyond the imagination of the people at the bottom of the pyramid.

Q: Do you have opportunities to meet ri ch people in your daily life, Mr Gu?

Gu: Opportunities to meet rich people... no, not very much (laughs). This is a world where magpies live among magpies, and crows live among crows. The people at the top may hear that people at the bottom live a hard life, but they know nothing about just how hard it is. Neither group knows about the other.

Q: News from Korea the other day mentioned a pizza parlour and hamburger shop opening up in Pyongyang.

Gu: That's right, I hear they opened up in the central part of the city. I haven't been there yet, but there are no such shops outside the central area. Ordinary Pyongyang citizens would have no idea of what a pizza is, or what a hamburger is. 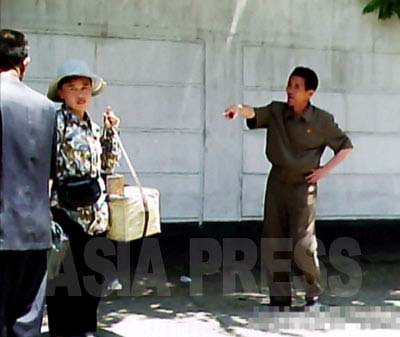 A municipality officer cracking down on unauthorized traders on the street. The women gather up their wares, stand up, move away a little, then start displaying their wares again. They are called Mettugi vendors (Mettugi means locust) since they hop around here and there like locusts.
( June 2011, Moranbong District, By GU Gwang-ho) ASIAPRESS

The Situation Regarding Food Rations and Electricity

Q: Please tell us about the recent food rations situation in Pyongyang

Gu: Ever since December last year (2010), food rations had stopped in all parts of Pyongyang City. Since the beginning of 2011, on February 16 (the birthday of Kim Jong-il), we got eight days worth, then on April 15th, five days worth. That was all. Then there was talk that there were instructions (issued by General Secretary Kim Jong-il), which led to Pyongyang citizens receiving rations of white rice in late August, and white rice and corn, half-half, in September. I hear that The "Number Two Warehouse" for stockpiling military food supplies was opened up to hand out the rations, and that orders were given to the department in charge of distributing food rations.

Q: How did the people of Pyongyang respond?

Gu: I think they feel relieved for the time being. Of course, the rations alone were nothing like enough to begin with, and we have to do business to buy our daily rice. And there's no knowing what the future will bring.

Q: In Pyongyang City, is the quality and quantity of food rations different depending on the district or rank?

Gu: I think what's distributed is almost the same across Pyongyang City. But on national holidays (for example on the birthdays of members the Kim family) "Special Supplies" are given out, and that differs by district. I hear in the Chung district (where many executives live), they receive a lot. In the peripheral districts, there may be nothing, or maybe just a bottle of wine.

Q: What about electricity?

Gu: Until early spring, it was really bad. On average, we only got electricity two to three hours a day. There were days when electricity was unavailable for the whole day, not even for a single second. Since summer maybe because the hydroelectricity power generation plants are in operation, the situation has greatly improved. We get electricity for about 15 hours a day. But the voltage is so weak, electric appliances won't work unless you have a transformer. And outside the central area, it's pitch dark, and there aren't even any street lamps.

Facebook Twitter はてブ Pocket Feedly
RECOMMENDATIONS
＜Local Interviews＞Is N. Korea’s “victory over COVID-19” legit? (1) Fever patients still emerge…People believe the country has achieved herd immunity
After officially acknowledging a COVID-19 outbreak in May, the Kim Jon...
Rimjin-gang Report - Pyongyang Construction Sites to Build 100,000 Apartments (2011) North Korea
In the capital city Pyongyang, a fully-fledged construction boom has b...
＜Kim Jong-un Regime＞ Cash Grab: Dictator Orders Crackdown to Confiscate Foreign Currency During Coronavirus Trade Crash
◆ Authorities intervene in the foreign exchange market Since the end o...
＜Interview With a N.Korean Woman＞ Nobody Trusts the Government! (3 Photos)
What do the North Korean people really think about the constant nucle...
Exclusion of North Koreans from the Mount Kumgang Tourism Project
Although I have yet to make a visit, I am told that the sight of Mount...
N.Korea - The subway train in Pyongyang refuses the passengers with shabby clothes and luggage
https://youtu.be/bDilS-CkjDM ◎ASIAPRESS rimjingang YOUTUBE playlistRag...