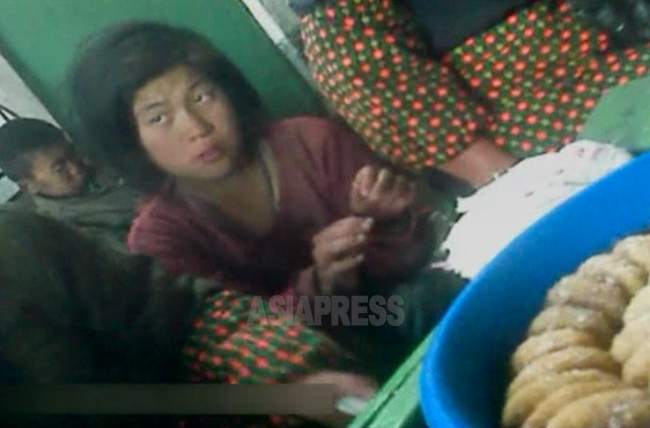 (Reference Photo) A homeless teenage girl warms herself next to a charcoal fire at a market. Photographed in Hyesan City, Ryanggang Province in November, 2012 by “Dandelion” (ASIAPRESS)

There is a growing number of elderly people and children begging in the streets of North Korea’s provincial cities.

A reporting partner living in Hoeryong, North Hamkyung province, went to the city’s market in late May to investigate the situation of North Korea’s homeless children known as ‘kojebi’. Up until this year, the ‘kojebi’ were a rarity in Hoeryong City, however, the reporting partner found that, since the spring, they have become an increasingly common sight.

◆ An elderly man begs, saying through tears, “I have nothing to feed my grandchild”

Though the number of ‘kojebi’ in Hoeryong’s market stood between 6-7 children at the start of the year, a recent count at the market shows an increase to around 20 children. In the past, the group of vagrants was made up of only children but, nowadays, elderly and middle-aged men are on the street as well.

Most of the ‘kojebi’ children at the market look to be around 8-16 years old. They beg around the entrances of markets and ask for food outside of shops. Though they complain of hunger, few customers give them any food.

On May 24, the reporting partner talked to a 14 year-old boy who had stolen food at the market. The boy said, “My parents are all dead. My house is in Kimchaek city.”

On May 27, the reporting partner talked to 2 children who were begging in the market. A 12 year-old girl and a 9 year-old boy said, “We’re from the Sapo district of Hamhung city. Our mom didn’t come home one day after going out for business and our dad died from illness.”

※ Kimchaek is a city on the coast of the East Sea where a large steelworks is based. The city of Hamhung, meanwhile, is North Korea’s second largest city, with many large state-run factories.

There are also reports of elderly people begging in the streets alongside the ‘kojebi’ children. The reporting partner came across an elderly man wearing dirty rags, begging for sunflower seeds. The man cried, “Please help me. I have nothing to feed my grandchild.”

Until recently, there were several organizations set up to deal with ‘kojebi’ children, working to round them up and clothe them, using resources allocated by the local People’s Committees. These days, however, the ‘kojebi’ are neglected. The reason is that their number has increased too dramatically, with middle-aged and elderly men out on the streets begging as well.

Even if the organizations manage to round up the ‘kojebi’ children, there is nowhere to accommodate them. At the moment, those in charge of managing the markets simply catch the children in order to expel them from the premises.

Next page : Sanctions continue to worsen conditions for ordinary people...