2013/August/11
Speaker： GU Gwang-ho, Rimjin-gang reporter
Editors：ISHIMARU Jiro, LEE Jin-su
（All the information in this article is as of November 2011）

Q: Last year, Chunghwa County, Sangwon County and other areas were cut away from Pyongyang City and reassigned to the North Hwanghae Province. Why do you think this happened?

(*Note 1 : In 2010, the four areas of Sangwon County, Chunghwa County, Kangnam County, and Sungho District which used to belong to Pyongyang City were suddenly separated from Pyongyang City and reassigned to the North Hwanghae Province. Some 300,000 people are believed to have become non-Pyongyang residents. In 2011 there were theories that Kangnam County had returned to Pyongyang City, but the details are unclear.)

Gu: People say Pyongyang City is too big for the current food distribution system, so these areas were reassigned.

Q: So the government is finally running out of money and can no longer maintain the "Great Pyongyang"?

Gu: That's probably it. Globally speaking, it may be better for a capital city to have a large population. But Pyongyang is unable to feed its citizens. This just shows that the state no longer has the power to do so. Everyone believes that's why. A nation is the same as an individual household. Even in the area where I live, we often say to each other, "Rather than increase the number of people who make money, decrease the number of mouths you have to feed." In short, this (the downsizing of Pyongyang) is the same as decreasing the number of mouths that have to be fed.

Q: What about the people in the districts that were suddenly cut off? How did they react?

Gu: I hear a lot of factories ground to a halt. There is a large cement factory in Sangwon County, and when the workers heard about being cut away from Pyongyang, it's said they held a sit-in protest and refused to work. 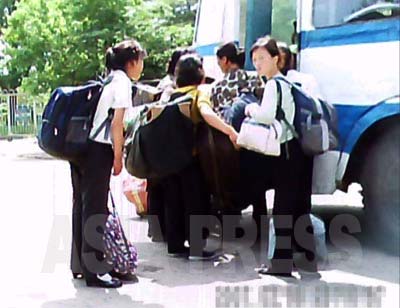 Women heading home by bus carrying large bundles of goods for sale. Such women are never seen in the central part of the city.( June 2011, by Gu Gwang-ho) ASIAPRESS

Q: Have you ever seen or heard of anti-government protestors handing out flyers or writing graffiti on the walls in Pyongyang City?

Gu: Personally, I haven't. In the elections on July 24th (local People's Committee election). I hear there was a graffiti incident at a polling station in Anju in the North Pyongan Province. Even if there were a similar incident in Pyongyang, local residents would immediately inform the local police station or the State Security Department. Then the whole area is shut off. People who have already seen it are warned never to talk about it to others. If they do talk about it, they will be deemed political criminals that have committed the crime of disclosing secrets, so rumours do not spread very easily. In the regions, if there are people giving out flyers or writing graffiti on the walls, people can chat about it all they like and rumours will spread, but that is difficult in Pyongyang. If you aren't careful and talk, that alone will get you thrown in jail, and banished from Pyongyang unconditionally, so everyone is very careful. 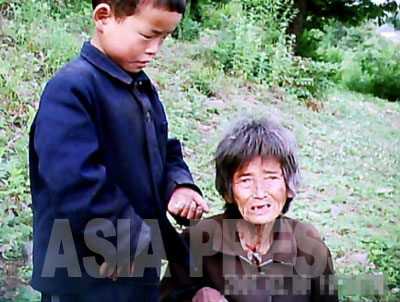 An old woman and her ten-year-old grandson, who live in the mountains to avoid being thrown into Kotchebi detention camps. They say the boy's mother went to sell her wares, and never came back.（June 2011, suburbs of Pyongyang City by Gu Gwang-ho) ASIAPRESS

Gu: There are often cases where residents are banished for next to no reason at all. If you commit a crime, you are banished immediately. Be it a financial crime or a political crime, in all cases you are banished. It's much stricter than in the regions. So everyone is constantly careful about how they act and what they say. And because everyone is scared of being banished, the crime rate is lower than in the regions. The surveillance of residents is much stricter. Being banished from Pyongyang to the regions is a major, earth-shattering event, and signifies one's downfall socially.