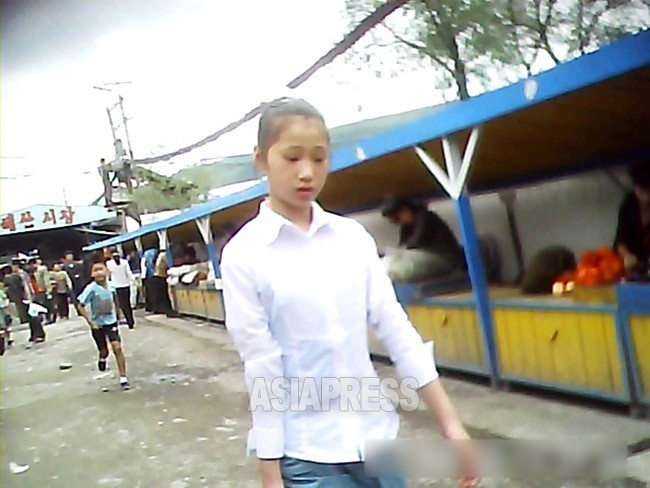 The entrance to Hyesan Market, where prices have soared due to the lack of Chinese imports following the border blockade. Photographed in July 2013 by ASIAPRESS

With trade at the border suspended in order to block the spread of the coronavirus, provincial cities are facing a serious shortage of medicine.

On April 24, a reporting partner living in the north of the country in Ryanggang Province explained, "Imports from China have been cut off, and the most scarce thing now is medicine. Last year, the regime banned individuals and non-drug stores from selling medicine and, due to the massive crackdown that followed, there is now no place to find it. Smugglers looking for a good business opportunity are making proposals to their Chinese counterparts, saying to them that 'drugs are worth their weight in gold' but they are not agreeing to any plans because of the tight security on both sides of the border."

The Kim Jong-un regime sealed off the Chinese border in late January after the coronavirus hit China, cutting off almost all trade. According to statistics released by the Chinese customs authorities on April 23, the total exports and imports between North Korea and China for March amounted to only $18.64 million dollars, down 91.3% from the previous year.

Apparently, some locals have already died due to a lack of medicine. The reporting partner emphasized the severity of the situation, saying "Around April 18, a woman in her 60's with acute diarrhea died in Hyesan City. She died of dehydration because she could not buy medicine."

International organizations such as the World Health Organization, the International Red Cross, and Doctors Without Borders have been supporting North Korea with coronavirus prevention and treatment since March but there is now an urgent need for general medicines.

Another reporting partner attested to the desperation of the situation, saying "Hyesan is the central city of Ryanggang Province but the current electric supply only provides for about 2-3 hours of use each day. Water is only supplied for about an hour in the morning and evening. The tap water smells strongly of disinfectant due to the [coronavirus] countermeasures." (Kang Ji-won)

Facebook Twitter はてブ Pocket Feedly
RECOMMENDATIONS
"Interest in President Moon Jae-in and expectations from his visit hav...
＜Inside N. Korea＞ Student absenteeism on the rise due to excessive requisition from school; a third of students are absent from school in local cities.
2016/Dec/19 Recently the number of student absenteeism has grown in l...
Rimjin-gang (NEWS FROM INSIDE NORTH KOREA) First English Edition Now available on iPad App
Rimjin-gang is unique in that it is based solely on the reports and an...
＜Inside North Korea＞ A 23 year-old homeless woman found dead
2011/February/05 ISHIMARU Jiro (Chief Editor) 23 year-old Homeless W...
Elderly party members excluded from DPRK Party Conference… Increased surveillance of the population
A reporting partner of ASIA PRESS reported that the first recommendati...
N.Korean State Demands Unconditional Loyalty To Kim Jong-un
2013/September/14 Written by KANG Ji-won, a defector reporterIt has be...