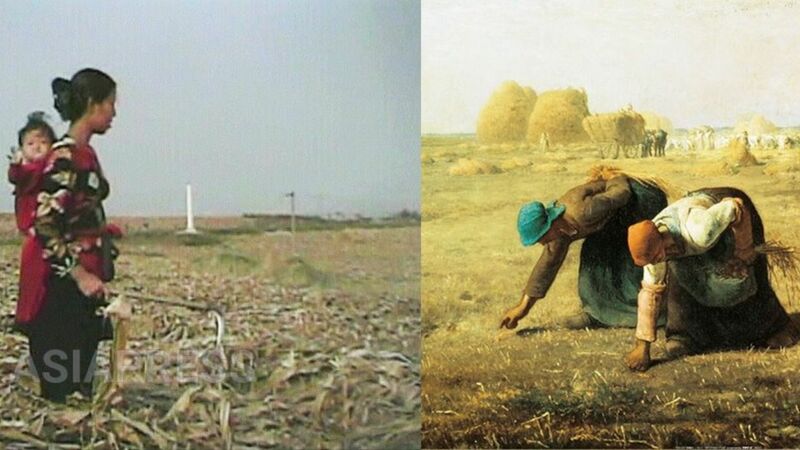 The famous painting 'The Gleaners' received negative criticism in the mid-19th century. It is now regarded as a masterpiece of French painter Millet.
A rural woman gleaning grain from a cornfield, photographed by ASIAPRESS in South Hwanghae Province in October 2008.

◆ North Korea is like the scene in Millet's famous painting

One of the characteristic works of French painter Millet is a painting depicting peasants bowing down and picking up leftover grain in a barley field after harvest. At first glance, it’s an idyllic pastoral scene, but it also incorporates aspects that allow modern society to imagine how poor the 19th century French peasants must have been.

Walking along the Chinese border with North Korea on autumn mornings, I have witnessed Millet's "gleaning" scenes many times. Across the Yalu River, among the North Korean rice fields, peasants wrapped in aprons bend over with open sacks looking for rice and ears of corn.

"This year is different," said a reporting partner living in the northern area of North Korea by phone at the end of November. Apparently, even urban residents are now going on 'gleaning expeditions' to rural areas. “Every morning, everyone, from the children to the elderly, heads to the rural areas.” This can only be seen as a desperate move by starving urban residents. 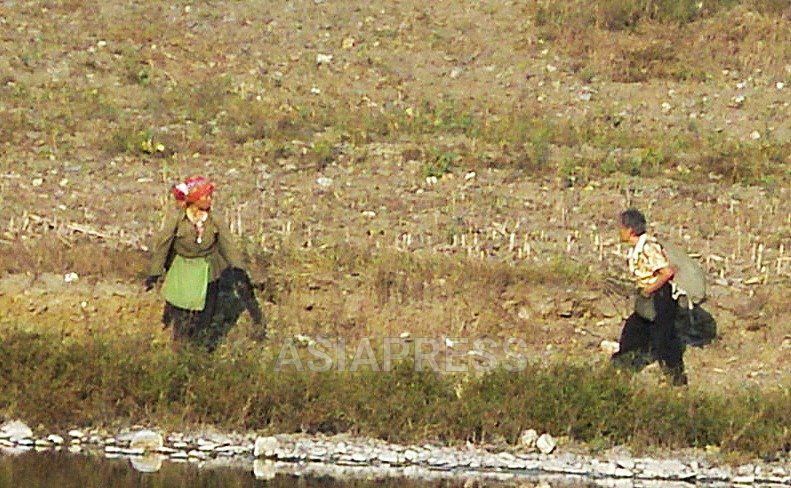 Rural women picking up grain from cornfields outside Pyongyang. Photographed by ASIAPRESS in September 2008.

Another reporting partner gave a specific example of urban residents going on ''Gleaning Expeditions' as follows.

“There is a mine worker that I know with a family of three. He has a child in elementary school and his wife sold soju from their home because the mine was closed- however, she had to stop selling due to the strict crackdown. The husband goes to work every day to a job where he doesn't get paid or even given rations and he has nothing to do. So, the wife goes to the nearby farming village every day to gather grain. The family is on the verge of becoming street beggars.”
NextPage: ◆ North Koreans face a humanitarian...

Next Page： ◆ North Koreans face a humanitarian crisis
1 2
Facebook Twitter はてブ Pocket Feedly
RECOMMENDATIONS
＜Inside N.Korea＞ Expansion of the market economy as the driving force behind social transformation--based on sources from inside N.Korea. (PART7) Information from outside being commodified and spread across the country. The government is losing control of the movement of citizens. by ISHIMARU Jiro
2016/Dec/28 5-3 The control of information is being weakened The Nort...
＜Inside N. Korea＞ “City of Fear”: State Security Command Deployed from Capital as Economic Deterioration Gives Rise to Drug Trafficking, Prostitution, and Organized Crime
The North Korean authorities reportedly deployed the Ministry of State...
＜Inside N. Korea＞ Regime Strikes Gold: Authorities Lock Horns with Locals in Sudden Gold Rush
The discovery of large amounts of gold dust in a northern river is sai...
Was the Incineration of a Shot S. Korean Official in Accordance with Kim Jong-un’s Instructions?
The shocking incident took place on September 22nd. A civil servant i...
N.Korea IT Report - PART1: Kids Master Emoticons and Movies with Mobile phones
2015/July/19 Written by LEE Jin-su, Editor; Rimjin-gang The number of ...
Special Gifts For the Worker`s Party Congress “Not enough.”: Only Toothpaste Set & Liquor
The 7th Worker’s Party congress ended on May 9. Despite initial expec...