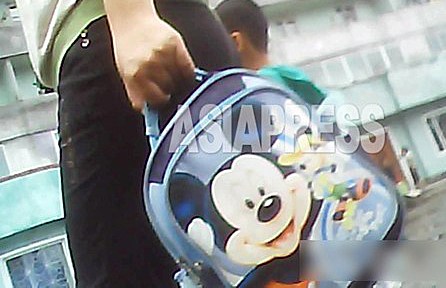 A mother is holding a Mickey Mouth bag for a child. In recent few years, various kinds of Mickey Mouse products spread in North Korea. August 2013, in Hyesan, Ryanggang Province. Taken by our Team ‘Mindeulle’ (ASIAPRESS)

“Let’s defeat the “scheme of decayed cultural infiltration” by enemies.”

With the slogan above, the North Korean government has tried to restrict in-flow information from outside.   It controls people by holding political indoctrination meetings and crackdown on (illegal sellers) at the market. These who possess foreign-produced DVDs, CDs, and documents can be punished as political criminals.

However, there have been wide spread of cultures and information from America, South Korea, and Japan–the “enemy nations”–into the lives of North Korean people.  In the market, there are a number of products of Mickey Mouse, Hello Kitty, Pooh Bear, and Doraemon that symbolize the enemies’ cultures.

Products of famous characters–most likely pirated goods–are all imported from China, then distributed across the nation.  Most of the citizens may be selling and buying those products without knowing that these characters are from the “enemy nations.”

Information from outside–that the North Korean government has cracked down–is coming into North Korea as products, then spread all over the country through the market activity. (ISHIMARU Jiro) 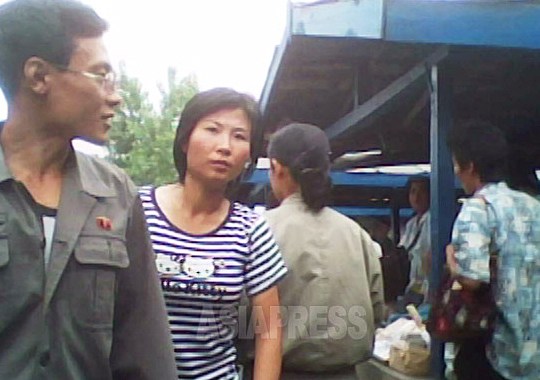 Looking closer, a woman is wearing a Hello Kitty T-shirt. She may not know it’s a Japanese-made character. June 2010, in South Pyongan Province. Taken by Kim Dong-cheol (ASIAPRESS) 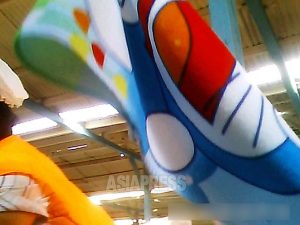 Our reporter picks up a Doraemon handkerchief made-in-China. It is sold at a market. August 2013, in Hyesan, Ryanggang Province. Taken by our Team ‘Mindeulle’ (ASIAPRESS) 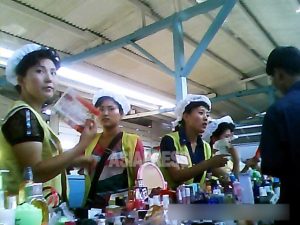 Women are selling cosmetic products made-in-China. South Korean products are also sold secretly. Through the sales of products, culture and information of the “enemy nations” have infiltrated into North Korea. The women are not the shop clerks but they are the owners of the stalls, which are 80 cm in width. Taken on August 2013, in Hyesan, Ryanggang Province by our Team ‘Mindeulle’ (ASIAPRESS)

Facebook Twitter はてブ Pocket Feedly
RECOMMENDATIONS
"Interest in President Moon Jae-in and expectations from his visit hav...
＜Inside N. Korea＞ A sergeant dies in the act (of stealing) ... Desperate soldiers raid smuggled goods to survive
◆State agencies involved in smuggling Hit hard by the United Nations' ...
Kim Jong-un's Birthday Not Marked on the 2014 Calendar
2013/December/30 Written by PAEK Chang-ryong, a defector reporter.It w...
＜Inside N.Korea＞Execution of Border Guard Officer Accused of Overlooking Defectors
On April 4, a reporting partner of ASIAPRESS, in a northern area of No...
A glimpse into North Korea’s COVID-19 situation (2) Urban lockdowns are slowly being lifted, and people in areas where lockdowns have ended are being sent to farms
After the North Korean regime acknowledged an outbreak of COVID-19 on ...
Top Secret Documents on North Korea's 'Tongpyo’: Regime Admits to Suspending the Issuance of Banknotes Due to Financial Woes - ISHIMARU Jiro
We obtained a "top secret" North Korean document. The document, issued...