Since the purge of Jang Song-taek, former vice chairman of the National Defense Commission, North Korean state authorities have been continuing a massive campaign to familiarize "Jang's crime" to the public.

Via phone conversations with our reporting partners inside North Korea, ASIAPRESS North Korea Reporting Team obtained information confirming that, while the fear of the liquidation continues to spread within North Korean society, people also have strong concerns about the whereabouts of Jang's wife, Kim Kyong-hui. Kim is an ex-director of the Light Industry Department of the Korean Workers' Party(KWP), and the sister of the late General Secretary, Kim Jong-il. 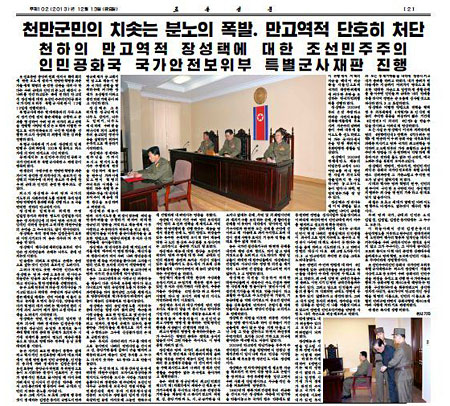 This article in Rodong Sinmun, the official mouth organ of KWP, impeaches the "crimes of Jang Song-taek and his gangs". Jang was sentenced to death by firing squad at the special military tribunal of the DPRK Ministry of State Security on 12th December. His execution was carried out immediately after this tribunal. (PHOTO: Rodong Sinmun;13/Dec/2013 )

Dissatisfaction is growing after authorities order people to write and submit 'confessions'.

On 18th December, ASIAPRESS's reporting team made the following phone conversation with our reporting partner living in the border town of the northern part of North Korea.

- What do the people think about the purge of Jang Song-taek and his close aides?

A reporting partner in North Korea (Partner):
People who do not have a sensible perspective said "All of Jang's close aides will be killed", but those who are more in tune with events disagree with this assessment. They don't believe what the government says at all.

Partner: Do you think there is anybody willing to die by expressing their dissatisfaction against state policy? Everybody is following the order and unstintingly submitting the composition. During yesterday's second remembrance anniversary event (NOTE; The national remembrance of Kim Jong-il's death, held on 17th December), there were investigations into every recorded absence in each institution and workplace. The state ordered explanation for absences from the event. I am actually fed up with this. The order requires investigation into details of who and why a person was absent. It was not so serious before the execution of Jang. Compared to the past, restrictions are getting tighter and tighter.

- How are the higher ranking officials reacting?

Partner: All is quiet, it seems. They are watching each other with cautious eyes. Especially, they refrain from talking about 'family issues' (of Kim Jong-il and Kim Jong-un), Jang Song-taek and Kim Kyong-hui. Even though they are trying to avoid these topics, there are many rumors everywhere about them.

- Do the authorities hold frequent lectures or meetings for the people on the crime of Jang Song-taek?

Partner: It is more than frequent. Lectures are given by the person dispatched from the State Security Department (intelligence service- secret police). These are simply talks on the theme of "Jang Song-taek has deceived us". 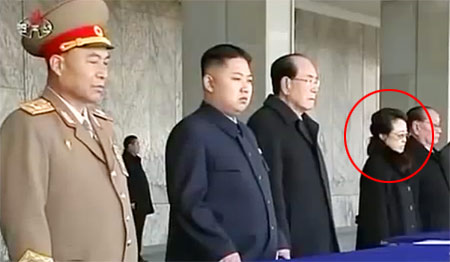 Kim Kyong-hui, a wife of executed Jang Song-taek and an aunt of Kim Jong-un, appears to have survived the purge. But she has been absent from the state official events. It is said that she has visceral disease. Currently North Korean people have strong concerns about the whereabouts of Kim Kyong-hui.

- What do the ordinary people think about Kim Kyong-hui's absence from Kim Jong-il's remembrance event on 17th December?

- What kind of stories or rumors are going around on the marital relationship between Jang Song-taek and Kim Kyong-hui?

Partner: I have heard from a military personnel who used be a sentry at Jang Song-taek's house that they (Jang Song-taek and Kim Kyong-hui) have been living apart in different houses. So there have been sentries standing at each of their houses.

It has become clear that the North Korean state is obsessively-devoted to undertake massive campaigns impeaching Jang with the phrase "Jang was an atrocious fiend", "Jang Song-taek was human scum, who was worse than a dog" after the purge. People are now scared of the aftermath of the liquidations, and at the same time certain feelings of backlash are in the mind of the public.

Facebook Twitter はてブ Pocket Feedly
RECOMMENDATIONS
＜Inside N. Korea＞ A grand pardon to mark N. Korea’s 70th Foundation Day, Released prisoners are malnourished, Authorities surveil ex-prisoners to prevent defection
◆Sentences Commuted by 3 Years On September 9th, the Kim Jong-un regim...
Column –Voices from inside N.Korea, ISHIMARU Jiro
Among East Asian countries, only the people of North Korea have been l...
＜Kim Jong-un＞ Humiliating 'note-taking scene’ during Kim Jong-un’s visit repeatedly broadcasted in China, edited out in North Korea
Kim Jong-un visited China from January 7 to 10 for a fourth summit mee...
＜Inside N.Korea＞ Expansion of the market economy as the driving force behind social transformation--based on sources from inside N.Korea. (PART6) Collapse of the food rationing system weakened control over the people. by ISHIMARU Jiro
2016/Dec/27 5 Social transformation caused by the expansion of the ma...
[Video Report] No merchandise for sale at North Korea's flagship department store
Pyongyang Department Store No. 1, located in Pyongyang's Central Distr...
Price is rising up due to a cornering sign of sanctions (ISHIMARU JIRO)
UN Security Council unanimously made a resolution to impose sanctions ...
＜Inside N. Korea＞ Poverty-Induced Civil Unrest Prompts Orders to Strengthen Security Around Military Bases, Police Stations, and Kim Family Statues
In North Korea, security at military armouries, security agency facil...
＜Interview with N.Koreans＞ "Is it any better in Kim Jong-un Era? Not at all! Preferential treatment is given to the Party officials by sacrificing the needs of the residents in the regions outside of Pyongyang!"
2015/December/13 Edit by KANG Ji-won, defector reporter, Rimjin-gang &...
＜Latest Report from N. Korea＞ Regime Aims to Block Coronavirus at Border as Local Hospitals and Populace Remain Woefully Unprepared for Potential Outbreak
The North Korean authorities have announced through state media that t...
＜Inside N. Korea＞ Expansion of the market economy as the driving force behind social transformation--based on sources from inside N.Korea. (PART1) by ISHIMARU Jiro
2016/Dec/19 ◆ Introduction It is widely known that the market economy ...