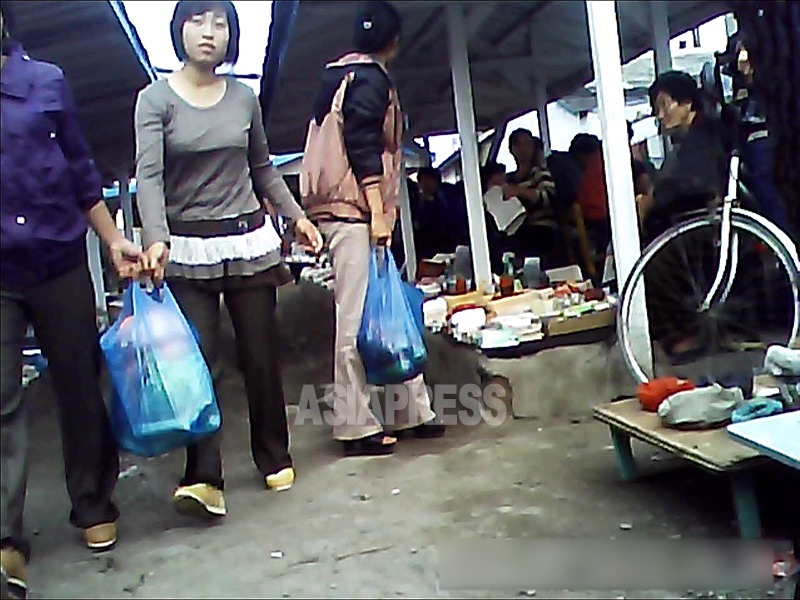 The market of Chongjin, the country’s third largest city. With the food distribution system all but collapsed, the majority of people survive through private market activity. Taken in September 2013 by ASIAPRESS.

Related Articlefa-arrow-circle-right＜Inside N. Korea＞ The Deteriorating Plight of the People (1)

In June, the economic turmoil began to take on the appearance of panic. Suddenly, the prices of food in the market soared, and at the same time, the value of the Chinese yuan and US dollar plummeted. ASIAPRESS has been conducting a weekly market price survey with the help of reporting partners living in North Korea. Since the beginning of July, the authorities have sparingly provided emergency food supplies to residents. However, the amount is only about 5 kilograms of corn per person. As a result, the market price has fallen a little, but it is still unstable due to uncertainty over the future.

Within a month, the white rice price temporarily soared by about 1.8 times and the corn price by 2.5 times.

What is less easy to understand is the plunge in the RMB.

The North Korean won is not recognized as an exchangeable currency in the international market, and even in the country, it was seen as little more than a piece of paper at one time. However, it has stabilized under the Kim Jong-un era through the authorities’ intervention policy. Nevertheless, there have been no conditions for the value of the North Korean won to rise.

Markets around the country are in turmoil. The price of food is going up every day, but there is no way to predict whether it will continue to rise or whether it has hit a ceiling, making it difficult to decide whether to sell or buy. Some people have lost a lot of money due to the plunge in the RMB. Several merchants have stopped trading at markets for the foreseeable future, and anxiety is growing among residents.

“The market is filled with sighs, shouts and screams. I can hear the sobbing of those who lost money and those who cannot afford the high prices. Many elderly people who live alone are starving to death," said a reporting partner from North Hamkyung Province. No one knows how to cope with the current chaos, and the future is entirely unclear.

The limitations of the Kim Jong-un regime's coronavirus quarantine policy are apparent. Even if North Korea itself is closed off from the rest of the world, the COVID-19 pandemic will never be able to end unless vaccination progresses in China and other neighbouring countries. The lives of the people of North Korea are deteriorating rapidly and the country is facing a humanitarian crisis. The Kim Jong-un regime must ask the international community for urgent assistance in food and vaccines and the international community should hasten to begin discussions. （END）

ISHIMARU Jiro
ISHIMARU was born in Osaka in 1962 and has visited North Korea three times and travelled about 100 times along the DPRK-China border region since 1993 for his reporting. He has interviewed about 1,000 North Koreans. In addition, he has established a network of reporters in North Korea.

Facebook Twitter はてブ Pocket Feedly
RECOMMENDATIONS
＜Inside N. Korea＞ The People’s Pipe Dream: "Trump will be impeached and the sanctions lifted"
Rumors are spreading in North Korea that President Trump will be impea...
＜Inside N. Korea＞ High-ranking Officials and Public Largely Unaware of the Situation in Ukraine…What Lies Behind the Regime’s Silence?
While the Russian invasion of Ukraine has shaken the world and forced ...
N.Korean Reporter, LEE Jun story
Many North Korean refugees live in hiding in the Chinese border city o...
＜Inside N. Korea＞ Stomach-turning Tradition: Citizens Called Upon to Collect Compost of their Own Making for Collective Farms
2019/Jan/21 ◆ Kicking off the year with a "compost collection battle"...
〈Photo Report- 8 (a) 〉 The Best Department Store in Pyongyang - But the Products on the Shelves are Not for Sale (1)
2013/July/02 Report byGu Gwang-ho(Original Report - Sep, 2011) Everyon...
＜Photo Report on N.Korea＞ Soldier’s Hard Life 5. Poorly Nourished Young Soldiers: Soldiers’ hunger started from 80’s. (4 Photos)
◆ Hunger of soldiers started from 80’s.Lee Sang-bong, a defector from ...