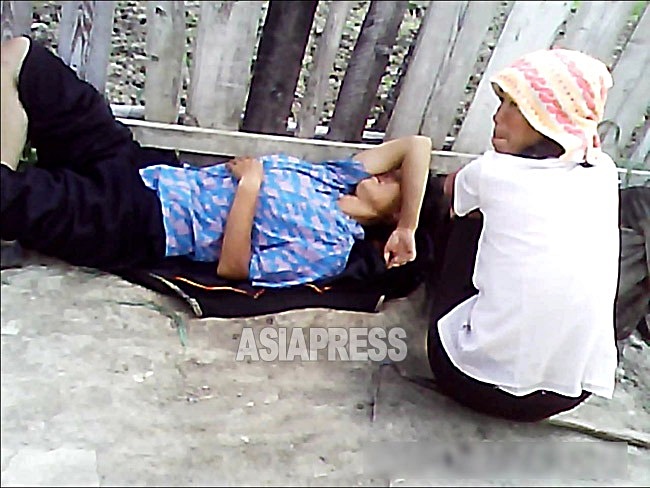 (Photo) An exhausted woman lies down to rest during a rural mobilization operation. Photographed in the northern region in June 2013 (ASIAPRESS).

On June 15, at the Central Committee of the Workers' Party of Korea, Kim Jong-un acknowledged the worsening food situation by stating that "the people's food situation is strained" and reiterated his order to give top priority to agriculture, saying, "It is imperative to concentrate all national power on agriculture."

So, what is the actual situation of the agricultural industry this year? ASIAPRESS researched the current situation during the height of the farming season in several northern regions. Upon investigation, hunger appears to be spreading among the farmers, as they are left with dwindling supplies (Kang Ji-won).

North Korea is currently amid a "rural mobilization" campaign. Since mid-May, city dwellers from all over the country have been taken to cooperative farms to help farmers by sowing corn seeds, planting rice, and weeding.

Last year, the "rural mobilization" was scaled down due to the concern over the coronavirus spreading. However, this year, under the policy of prioritizing agriculture from the beginning of the year, "urban residents are taking turns to go to rural areas under the instruction of the authorities. They say that ‘those who can hold a spoon must go to rural areas’," said the reporting partner.

For this year's rural mobilization campaign, each enterprise or group was assigned a farm to work on, with residents visiting the farm two to three times a week. In addition to the "commuting" method, a new method has been introduced in which those who are stationed at the farms are selected to be in charge of the designated fields until harvest. The chronic shortage of labour on the farms was solved for the moment, giving a lift to the overburdened  farm workers.

However, some cooperative farm leaders and residents are already pessimistic that agricultural production will worsen this year.

The first serious problem is the shortage of farming materials. The reporting partners who conducted the research agreed that there was a complete lack of fertilizer, pesticides, herbicides, vinyl, fuel for vehicles, and parts for agricultural equipment.

North Korea's staple food, corn, is grown in nurseries called "nutrient complexes," and then planted in the fields. This system has not been working well since April, according to the report.

“There are many fields that have failed to sprout in the nurseries due to a lack of fertilizer. Instead, they have been sown directly into the field, but due to the severe acidification of the soil, growth is poor,” said a farmer living in Hoeryong.

“There are no herbicides coming from China, so we weed the nursery by hand, one by one," said a farmer living in Pochon County.

The authorities are not just sitting on their hands. They have prioritized the transportation of domestically-produced fertilizers and Chinese fertilizers by rail, even though they are in short supply. However, domestic chemical fertilizers have a terrible reputation as being “inferior to human waste.”

The second difficulty is the lack of funds.

This year, instead of having the farms pay for the meals of the personnel coming from the cities, it was decided that they would be paid for by the companies that send personnel to the mobilization. Since food can only be purchased at the market, each organization has formed a "profit-making group" to raise cash at their own local markets. Still, due to the massive slump in business caused by the coronavirus restrictions, they have not made enough cash.

Due to the lack of funds, the cooperative farms cannot purchase fuel to run their farming machines- not even the vehicles used to pick up farming materials supplied by the government. "The company has exempted workers from mobilizing if they pay 100 RMB, but people can't raise the money," said a farmer living in Hoeryong. 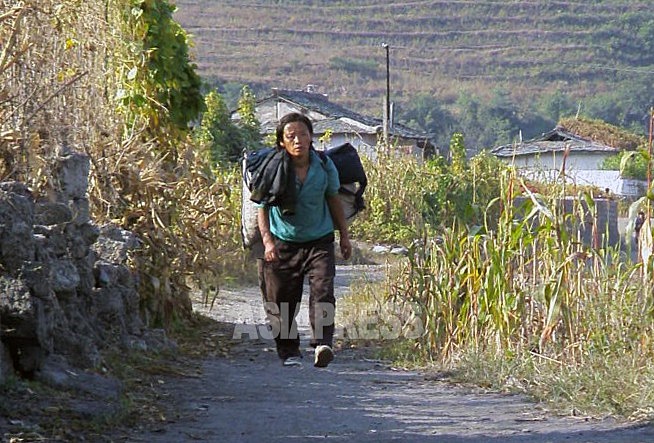 (Photo) The poorest areas in North Korea are the farming villages. A rural woman carrying a large sack on her back. Photographed by Chang Jong-gil in a farming village on the outskirts of Pyongyang in October 2008 (ASIAPRESS).

◆How can a starving farmer work?

The most severe problem is the impoverishment and hunger of the cooperative farmers. It is said that the number of "food insecure households" that have consumed all of the food distributed last year and have since run out of cash, has been increasing since May.

“The farm's work unit consists of about 12 people, but three or four of them are from 'food insecure households.’ In April, the local government provided them with 50 kilograms of potatoes but they had already eaten them up,” said an agricultural official living in Pochon County.

"Thirty percent of the farms are from 'food insecure households.' A farmer, who is a member of the Workers' Party, was ordered by the party organization to take charge of and help the starving food-insecure households- to bring them corn. However, the life of the party members is also tough, and they can only help those within a few kilometres of them," said a farmer living in Hoeryong.

"This year's agriculture is 'manchetta' (meaning ruined, no good)." This was the word heard on all the farms investigated.

On the other hand, the situation in the Hwanghae Provinces, the breadbasket, is not clear due to a lack of information. According to Chinese customs statistics, a large amount of fertilizer was imported from China in April. The fertilizer was likely sent by ship to the port of Nampo on the west coast, from where it may have been delivered to farms in the Hwanghae Provinces.

Information that a large amount of food aid from China will be delivered from June onward has begun to be reported by officials in various regions. On June 19, our reporting partner in North Hamkyung Province gave us the latest information: "I heard that in July, China's food aid would be urgently distributed to 'food insecure households in rural areas with the highest priority."

In June 2019, President Xi Jinping made his first visit to the country, and that the aid would mark the second anniversary of his visit.  An intelligence official in the government responded, "Last year, we estimate that China provided about 500 thousand tons of food aid."

Facebook Twitter はてブ Pocket Feedly
RECOMMENDATIONS
＜PHOTO REPORT＞Sino - N.Korea Border: ［PART2］A Sign of Late Spring In the Border Town of Hyesan
2014/April/19 (This report first appeared in the Korean and Japanese e...
＜N. Korea Interview＞ "So the sanctions will continue?" North Koreans Face Disappointment as US Summit Breaks Down
◆“But we had been expecting the sanctions to be lifted…” On February 2...
"Our Life in Pyongyang Is Not So Easy As You Imagine" - Even in the highest quality apartments in Pyongyang running water is irregular and unreliable
Rimjin-gang 2014/January/20Even in the highest quality apartments in P...
"Interest in President Moon Jae-in and expectations from his visit hav...
＜Inside N. Korea＞ A recent flood has left thousands dead: following the flood mass forced-migration of the poor into the affected area. 'Entire villages have disappeared. '
2016/Dec/1 Toward the end of August this year, 2016, a large flood oc...
＜Inside N. Korea＞ Homeless and Helpless: Residents Young and Old Beg as Population Fears a “Second Arduous March”
◆ People’s lives deteriorating as sanctions continue There is a growin...