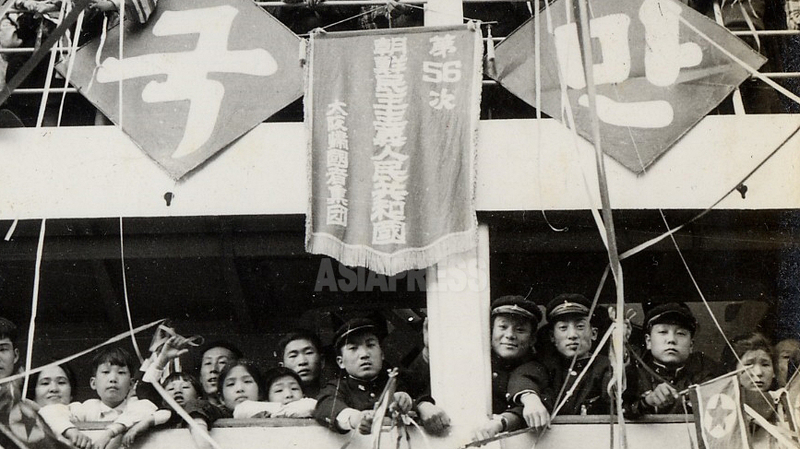 Of the 1,145 people who set sail for North Korea on April 28, 1961, 73 were Japanese nationals- spouses and children of the returnees. Photograph provided by Yang Young-hoo

Gazing down from the deck of the ship for a picture, some can be seen to be smiling, while others appear less at ease. One’s eyes are drawn to the young children and students dressed in uniform, sullen as they say farewell to their friends and family down below.

The banner above the group reads, “The 56th group of returnees from Osaka to the Democratic People’s Republic of Korea”. Taken on April 28, 1961, the photograph commemorated the voyage of 1,145 people aboard a Soviet ship from the Japanese port of Niigata to North Korea.

This photograph was provided by the late Yang Young-hoo, who, at the time, taught at a North Korean state-sponsored school in Osaka. He had gone to Niigata to see his pupils off.

“Not long after sending them to North Korea, the letters stopped coming. After that, we didn’t hear any news from many of the children. I feel very guilty.”

Up until his death, a year ago, Mr. Yang deeply regretted sending his students to North Korea.

The first ship to return people to North Korea left Japan on December 14, 1959. Over the next 25 years, a total of 93,340 people (including some 6,800 Japanese nationals) moved to North Korea. For every 13 Korean-Japanese people, 2 set sail for the North, with many coming from Osaka and Tokyo, cities with large Korean-Japanese populations.

In the 1950’s, life was difficult in Japan for Korean-Japanese people as they were unable to join the national health insurance or receive a state pension and had very few employment opportunities due to discrimination. Trapped in poverty and facing such obstacles, many in the community had little hope for the future.

In 1958, the Kim Il-sung regime, in cooperation with “Chongryon”, the General Association of Korean Residents in Japan, launched a massive campaign for the return of Korean-Japanese people to the North. Portrayed as a humanitarian effort, the project was supported by trade unions, municipal governments, and various Japanese political parties, ranging from the Liberal Democratic Party to the Communist Party.

About 20 years ago, however, these “returnees” began to appear in South Korea, having managed to secretly defect. These days, about 200 of these defectors live in Japan and another 300 in South Korea. Starting last year, ASIAPRESS began interviewing this community to listen to their stories.
Next page : To prevent painful memories from becoming lost to time…