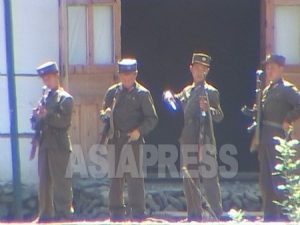 (Reference Photo) North Korean soldiers are checking their weapons. Taken by ISHIMAU Jiro at Musan County of North Hamkyung Province from China side in August 2004.

It is said that North Korean military started to repair and build protection wall for gallery against enemy air strike from mid April. A military official in Chongjin City delivered the news to ASIAPRESS (Kang Ji-won)

According to his saying on May 11, “military camps are repairing and reinforcing the protection wall by the order on around mid April from the Ministry of Defense to protect the gallery against air strikes, including cruise missiles. Some camps completed the work, but most of them are still working,” the official commented.

He also explained that the ministry gave the order to rebuild the protection wall since they had found problems with the walls through stock and condition checks on military supply.

Kim Jong-un regime might have felt intimidation by the cruise missile attack of Trump regime on Syria on April 6, which led them to order reinforcement of the protection wall.

He gave the details of the order: As most of the protection walls are made of stones, it is likely that there would be casualties from chips by missile strike. Thus they tore down the existing ones and rebuilt the walls with gunny bags with sand and earth.

The protection wall means the wall or embankment to protect bullet proof door of gallery from enemy air strike. Every air raid shelter and gallery has that wall which is maintained with regular repairing work.

The military official continued his explanation: The new wall is built as a triangle, 5 meters ahead of and 3 meters high above the gallery entrance. But as the military camps can’t secure enough gunny bags, they purchase the bags at nearby farms and even at Jangmadang. (North Korean local market or black market)

*ASIAPRESS sends Chinese mobile phones into North Korea to cover its inside story.

Facebook Twitter はてブ Pocket Feedly
RECOMMENDATIONS
Kim Jong-un's Reputation Suffers as It Becomes Harder to Make Ends Meet
Putting on a Show to Enhance Authority with the Military Writing the S...
＜Photo Report＞ Female Soldiers are in Miserable Conditions: Mothers are worried about their daughters getting sexually harassed and becoming malnourished.
2017/Feb/6 In late 2011 a female North Korean defector in China regre...
Exclusion of North Koreans from the Mount Kumgang Tourism Project
Although I have yet to make a visit, I am told that the sight of Mount...
＜N.Korea photo report＞A Look at North Korea's Impoverished Rural Women (4) 'People are working just to be robbed' (Photo 5)
◆Excessive quotas hurting farmers North Korea still employs collective...
"I Want to Keep Reporting Till the Moment I Die"
2012/June/10 (Note: This message was written before the death of North...
＜Inside N.Korea＞ Total War Is Impossible for N.Korean Army
2017/May/11 Many Japanese media in the recent month have produced th...
＜Inside N. Korea＞ Hundreds mobilize in Hyesan to rally against fortune-telling and drug use
In Hyesan, North Yanggang province, fortune-tellers and drug users wer...
The Changing Face of the Tuman-gang (Tumen River) - PART 1
Sino-North Korean border report: - Wire Fence Installed Along The Enti...
Kim Jong-un Regime Fears Digital Resistance: less than 0.1% of N. Koreans Can Access the Internet (ISHIMARU Jiro)
Kicking down and shooting civilians- Myanmar's security forces have sh...
＜Photo Report＞ Kotchebi, the Homeless, Under the Kim Jong-un Regime (PART2) Toddler worn out on a street while regime shows off luxury orphanages
2016/Oct/27 The North Korean state media has often announced that Kim...