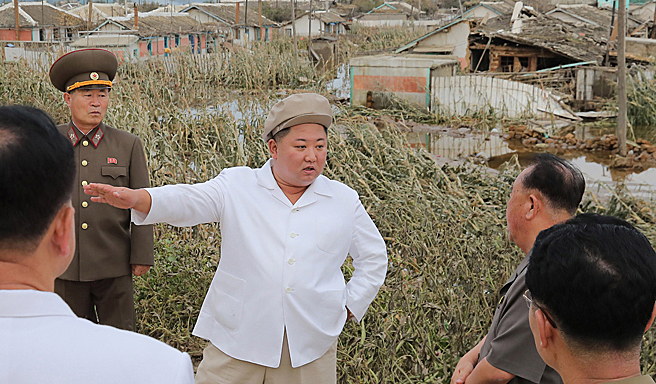 (Photo) Kim Jong-un touring typhoon-hit areas. Perhaps mindful of public unrest, he has increased the number of on-site inspections since August. Photograph originally published in the Rodong Sinmun on September 5, 2020

◆ Special alert issued at the end of July

In North Korea, strong countermeasures to prevent the spread of the coronavirus have been in effect since late July, causing further deterioration to local living conditions. With no end in sight, anxiety is spreading among local residents. (Kang Ji-won)

Kim Jong-un convened an emergency meeting of the Political Bureau of the Workers' Party on July 25 to declare an emergency over the coronavirus situation and issue a special alert.

Though coronavirus measures had been eased in early June, the emergency alert has brought back tight controls across the country, leading to much discontent among the general population.

According to reporting partners from various regions of North Korea, access to the capital is currently being tightly restricted and buses have been banned from highways, with the movement of people being strictly controlled in provincial areas as well.

The biggest complaint among residents is over the strengthened quarantine measures. A reporting partner living in the country’s third largest city, Chongjin, in North Hamkyung Province shared the following with ASIAPRESS in early September:

“An acquaintance in Sinan-gu had a relative visit from another area to provide some help at her house, but because the relative had a cold, she was reported by the leader of the inminban (local political unit) to the district quarantine office. Both of the women and their families were subsequently placed into compulsory quarantine for 20 days. A total of 16 households were additionally placed in quarantine.”

According to the reporting partner, disinfection work was carried out in the area and all residents were banned from leaving their homes, even from using outdoor toilets. Furthermore, public safety officers and militia guards were mobilized to keep the residences under surveillance for the full 20 days.
NextPage: ◆No PCR coronavirus tests for ordinary people?...