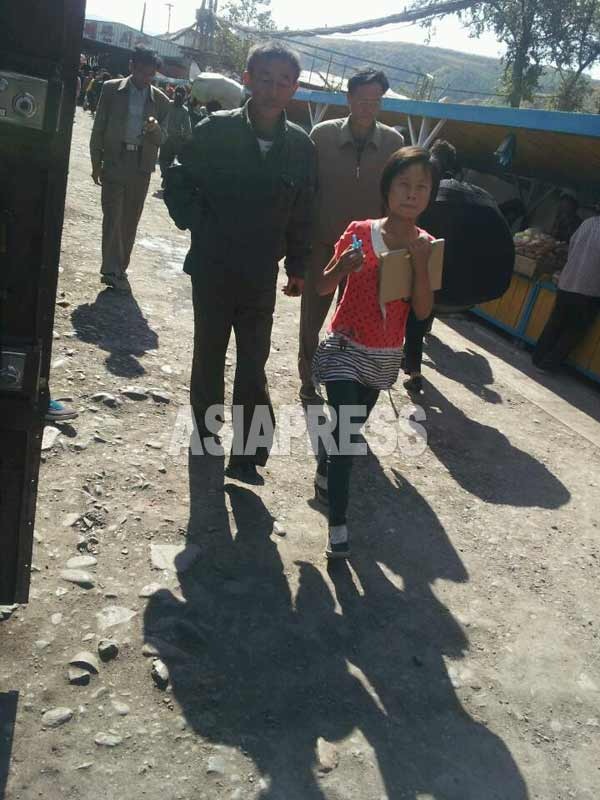 (Photo) Hyesan Market in the evening. Photographed in mid-September 2014 by ASIAPRESS. The market is currently deserted due to sluggish business.

On June 15, ASIAPRESS conducted a market investigation in the northern regions of North Hamkyung Province, Ryanggang Province and North Pyongan Province. The market prices in the three locations were similar, but with a slight difference. The average price and the prevailing exchange rate of the won for the RMB and the U.S. dollar were as follows: white rice prices increased by 1.7 times, and corn prices increased by 2.4 times compared to May 28, while the RMB fell by 40%. ※Food is priced in Korean won per kilogram.

What is noteworthy is that the sudden plunge in the value of the RMB and the U.S. dollar on June 4 was the beginning of a surge in prices. In addition, the rise of food prices in RMB is unusual. For example, calculated in US dollars, the cost of white rice on June 15 was about 1.87 USD, and the price of corn was about 1.41 USD, an unusually high price.

◆ The authorities are not controlling prices

Last year, when imports from China came to a near halt in response to the coronavirus and price increases, the North Korean authorities, extremely wary of inflation, set a ceiling price for grain sales in the market and took strong intervention and control measures, including confiscating the rice of traders who did not comply. However, as of March 15, the authorities seem to be sitting on the sidelines.

“The authorities are just sitting on their hands and have not taken any action to control prices,” said our reporting partners.

◆What is the cause of the soaring food prices?

So, what is the cause of the extraordinary rise in food prices? ASIAPRESS reporting partners gave the following opinions on the matter.

Markets are in chaos. "Sighs and shouts of anger are everywhere in the market. I can hear the sobbing of those who have lost money and of those who can't afford the high prices," said a reporting partner in North Hamkyung Province.

The price of food is rising rapidly every day, but it is difficult to predict whether it will continue to rise or whether it has hit a ceiling, making it difficult to decide the value of goods or whether to buy. In addition, some people have lost a lot of money due to the plunge of the RMB.

The current turmoil was caused by the simultaneous decline of the RMB and the rise in food prices. As a result, no one knows how to protect themselves, and the future is entirely uncertain.

“I feel the threat to our lives. In fact, elderly people who live alone and don't have money to buy food are dying everywhere,” one of the reporting partners concluded.  (Kang Ji-won / ISHIMARU Jiro)

Facebook Twitter はてブ Pocket Feedly
RECOMMENDATIONS
＜Inside N. Korea＞ “No plan, No policies”: Residents Confounded and Critical after Kim Forgoes New Year Address
For the majority of North Koreans, the New Year kicks off with a tedio...
＜Inside N. Korea＞ "It Was Trump’s Fault"... Regime Pushes Blame for Summit Breakdown Away From Kim Jong-un
◆ Still, nothing explained to citizens Since negotiations for denuclea...
People Struggle To Collect Firewood for Winter
The Daily Life of North Koreans2014/February/19 Written by PAEK Chang-...
〈Photo Report 5〉 Malnutrition Rampant Among The People's Army
2011/December/17 Written by LEE Jin-su : Photo by Gu Gwang-ho (Origina...
Residents of N. Korea's Embattled Cities Face Starvation Amid Continuing Coronavirus Blockade
One of the characteristic works of French painter Millet is a painting...
[Video Report] N.Korean Kids on the Battle of Life
North Korean kids were forced to enter the battle of life since the ‘a...