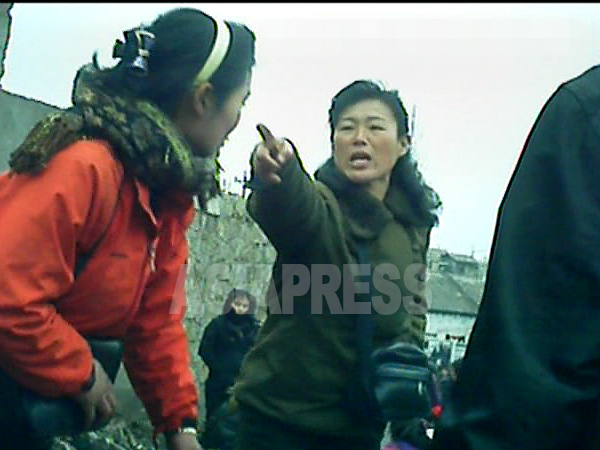 A market supervisor scolds a young woman (left) for not paying the market fee. Photographed in Pyeongseong, South Pyongan Province in March, 2013 (ASIAPRESS)

The Kim Jong-un regime is attempting to earn foreign currency through a variety of schemes in order to compensate for the loss of trade due to the UN Security Council’s economic sanctions. One of these schemes is the exploitation of funds from its own people.

Part 1>>> ＜N. Korea Pro Report (Part 1)＞ How is North Korea’s Economy Faring in the Face of the Coronavirus Pandemic and Continued Sanctions?

◆ Reaching into the pockets of villagers- exploitation through mobilization

Though under-recognized by the outside world, one of the most important sources of foreign currency for the regime is its own populace. This exploitation can be categorized thusly:
1. Sales of goods and services
2. Tax collection and utility billing
3. Forced cash donations from citizens
4. Exploitation for free labor through mobilization

North Korea has actively engaged in trade with China, with much trade being conducted in foreign currency, including the RMB and US dollar. This is because the North Korean won has no credibility at home or abroad. With the widespread use of foreign currency in North Korea, the values of goods are now measured solely in foreign currency. Although the US dollar prevails in and around Pyongyang, the RMB is highly circulated in areas closer to the Chinese border.

A typical example of foreign currency procurement by the regime is through the sale of goods and services, such as at mobile phone terminals. North Korea introduced mobile communications in December 2008. Since then, the spread of the technology has exceeded expectations, with the number of subscribers to the service growing rapidly to about 6 million users.

The mobile devices are made in China with North Korean specifications. There are various smartphones and tablets, with new products planned to be released soon as well. In October of last year, ASIAPRESS asked a reporting partner in North Korea to go to a vendor to investigate. The reporting partner saw 15 models on sale, with prices ranging from 200-700 US dollars. Apparently, the devices must be purchased in foreign currency.

Earlier this year, ASIAPRESS asked a reporting partner to buy 3 of the latest smartphones for them to be sent to Japan. Inspecting the devices in Japan, we saw that the various applications, such as dictionaries, videos, and games, were quite impressive. The processing speed of the devices felt quite slow but only slightly lower than that of devices used in Japan.

Through the sale of these mobile devices, how much foreign currency does the Kim Jong-un regime earn?
Next page :Big money made through sales at mobile phone terminals...