◆ Extortions of cash and labor from the people

A strong complaint from the general populace is the forced collection of cash by the regime in the name of “support.” Since the old days, the government has collected between 570 and 5,700 won from each person through local political units and schools. These funds were collected as a way of supporting troops, school facilities, and road maintenance. Since economic sanctions were tightened in 2017, however, the regime began collecting cash from citizens throughout the year. This was done in order to support the construction of the special tourism zone in Samjiyon and the Dancheon hydroelectric power plant, among other state projects.

Reporting partners testify that, “[The authorities] do not set an amount to be donated but force citizens to hand over cash as a ‘show of sincerity.’ If one hesitates, they will be criticized for their ‘lack of loyalty to the Party.’ Households cannot afford to keep giving 100 Chinese yuan each month. The ‘donju’ (newly-emerged wealthy class) who are conducting big business must pay more.”

Cash is not the only form of support. Between 2018 and 2019, the state also demanded labor from its citizens. During the construction of the Samjiyon Special Tourist Zone and the Dancheon Power Plant, students and workers were deployed to construction sites in 3-6 month rotations as part of specially mobilized “construction brigades.” 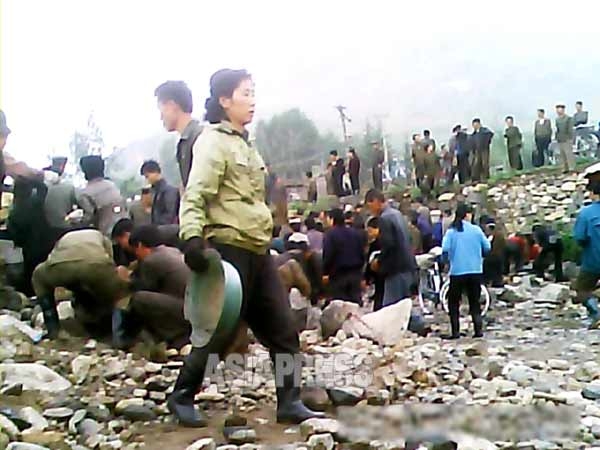 Residents mobilized for maintenance of riverbanks collect stones along the river. Photographed outside a northern provincial town in June, 2013 (ASIAPRESS)

Samjiyon, located at the foot of Mount Baekdu, is famous for being the base of Kim Il-sung’s operations against the Japanese. Known as the “Holy Land of the Revolution,” the regime also claims Samjiyon to be the birthplace of Kim Il-sung. (Though he was actually born in the Soviet Union.)

In November 2016, Kim Jong-un ordered for an international tourist zone to be developed in Samjiyon. Despite the difficulty in raising funds under UN Security Council sanctions, the regime was able to redirect much of its resources towards the top-priority national project. When construction finished in December 2019, Kim Jong-un personally attended the completion ceremony.

ASIAPRESS sent several reporting partners to investigate the site in Samjiyon. Made up from the “construction brigades” of each province, the “216 Corps” at the site worked on the plumbing of the area while living in nearby tents. Tens of thousands of workers and farmers were deployed at the site at all times. As such, the factories and cooperative farms from which these laborers were recruited suffered major setbacks in daily production.

Each province was responsible for providing the daily meals for the laborers their province had sent to Samjiyon. Indeed, it is estimated that much of the funds and material costs of the construction were appropriated from the North Korean people. In other words, the regime made up for its lack of budget by exploiting its own people. (ISHIMARU Jiro)

Part3 >>> ＜N. Korea Pro Report (Part 3)＞ How is N. Korea’s Economy Faring in the Face of the Coronavirus Pandemic and Continued Sanctions? A Look at the Regime’s “State Smuggling” Operations