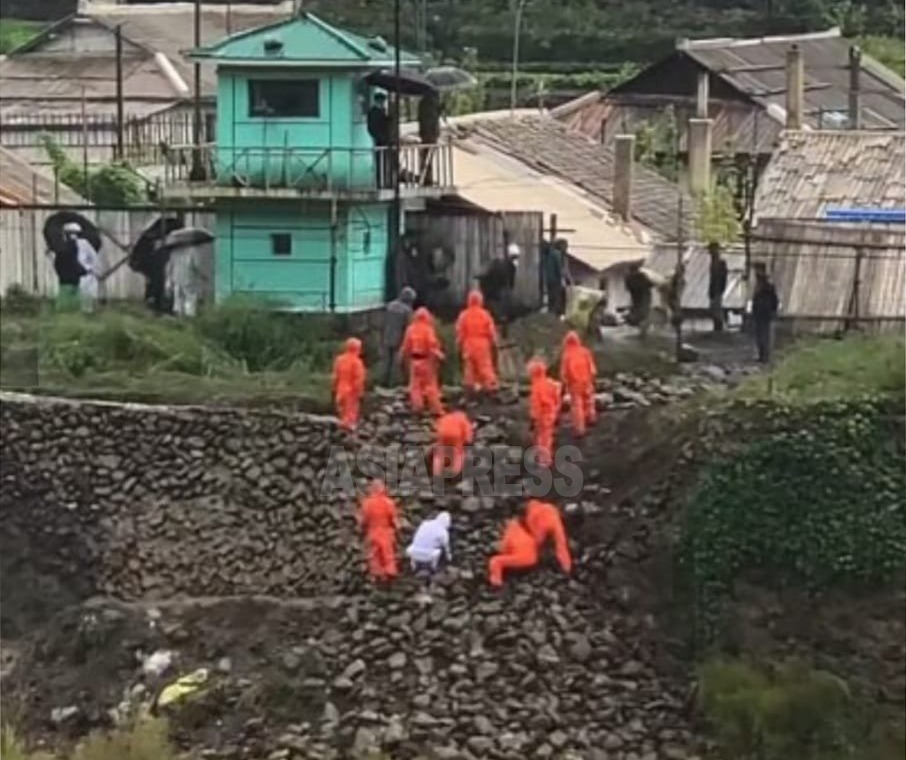 Young soldiers wearing masks standing behind barbed wire in Sinuiju. The soldiers appear thin. This photo was taken in July 2021 from the Chinese side of the Yalu River across from Sinuiju.

North Korean authorities officially acknowledged that the Omicron variant has been found in Pyongyang on May 8 during a politburo meeting on May 12.

In fact, starting several days ago, there have been rumors among North Korea watchers that lockdowns appear to have begun in Pyongyang and other places. ASIAPRESS was also contacted in regards to this.

According to a reporting partner in Hyesan, there was no announcement of a COVID-19 outbreak as of May 11 nor were any lockdowns reported in Sinuiju, Hyesan, or Musan. There was, however, an announcement by the authorities to “not go outside because of yellow dust.”

According to KCNA, the May 12 politburo meeting said that the spread of the disease was national in scale, meaning that the disease may have spread in areas of the country outside of Pyongyang.

Reporting partners in various parts of North Korea reported the following on May 11:

“At the inminban (people’s unit) meeting on May 10, they warned that everyone must be on their guard due to a drastic rise in COVID-19 cases in China. In the future, our country could conduct city-wide lockdowns, and if you come across people with suspicious symptoms such as fevers or coughing, report them. I wondered why they were emphasizing COVID-19 so much again when there hasn’t been much change in the situation with what’s been happening so far.”

“The authorities are strongly cracking down on hoarding at markets. They have ordered for everyone to report this behavior if they see it.”

"Movement to other areas has suddenly become much more difficult. The authorities have announced that districts as opposed to entire cities will be locked down if anyone suspected of having COVID-19 is found.”