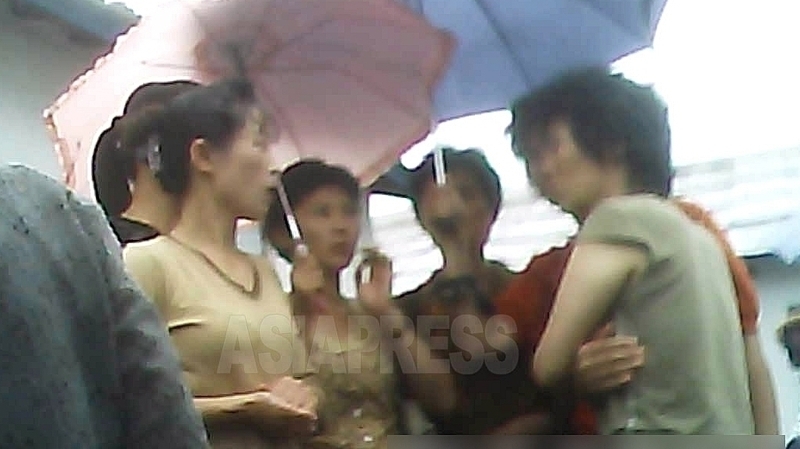 (File photo) Since there is little public trust in state media, information is spread by word of mouth among residents. Pictured are women chatting nearby a market. Photographed in Hyesan City in August 2013 by ASIAPRESS

According to a reporting partner living in the northern region of the country, who spoke with ASIAPRESS on April 28, "Rumors of Kim Jong-un's surgery and possible death are spreading among the women in the market. The secret police have begun a crackdown and are searching for those who are spreading the 'false rumors.'"

After media outlets in South Korea and the United States reported on April 22 of rumors that Kim Jong-un was in critical condition following surgery, news regarding Kim Jong-un's health spread around the world. The very next day, ASIAPRESS contacted a reporting partner in North Korea to share the information. The reporting partner, however, had already heard. In the week since, rumors regarding Kim Jong-un's health have spread rapidly across the country.

Information from the outside world mainly makes its way into North Korea from China. Just like ASIAPRESS reporting partners, there are many North Koreans living in the northern border region who secretly possess a mobile phone smuggled in from China. For the most part, they are traders or people with relatives in China.

Speaking on the reaction of locals to the rumors, the reporting partner said, "At first, many people suspected that they were false rumors but, as similar information came from all over China, more and more people started believing it."

In an effort to block the influx of outside information, the North Korean authorities have been cracking down on the possession of Chinese mobile phones.

According to another reporting partner, living in Hyesan City, Ryanggang Province, "In early March, a five-member national security team came from Pyongyang to lead the crackdown. Recently, even more personnel have been added. This is because the rumors about Kim Jong-un's health have been coming mainly from Ryanggang Province. In particular, employees of trading companies are under suspicion due to their frequent contact with Chinese partners."
Next page :Authorities also look to limit spread of information about coronavirus...

Next Page： ◆ Authorities also look to limit spread of information about coronavirus
1 2
Facebook Twitter はてブ Pocket Feedly
RECOMMENDATIONS
＜Inside N. Korea＞ Homework and Housework: Children Forced to Do Chores and Study From Home with All Schools Closed Due to COVID-19
◆ Families become desperate as economic threat looms larger than risk ...
＜Inside N. Korea＞ Hundreds mobilize in Hyesan to rally against fortune-telling and drug use
In Hyesan, North Yanggang province, fortune-tellers and drug users wer...
＜Inside N. Korea＞ Breaking Point: Armed Standoff as Border Guard Storms into House of Commanding Officer to Air Grievances
◆An incident underlied by the poverty faced by soldiers? On March 8, a...
From The Editor
To the Readers of the English Edition of Rimjin-gang : ISHIMARU Jiro (...
Rimjin-gang - Editor's Notes on N.Korean Reporters
All our staff inside North Korea work under assumed names.Any article ...
＜Inside N. Korea＞ Residents Relieved as Authorities Distribute Emergency Food Supply of 5-7 Kilograms of Corn
In North Korea, the Kim Jong-un regime's extreme measures against cor...