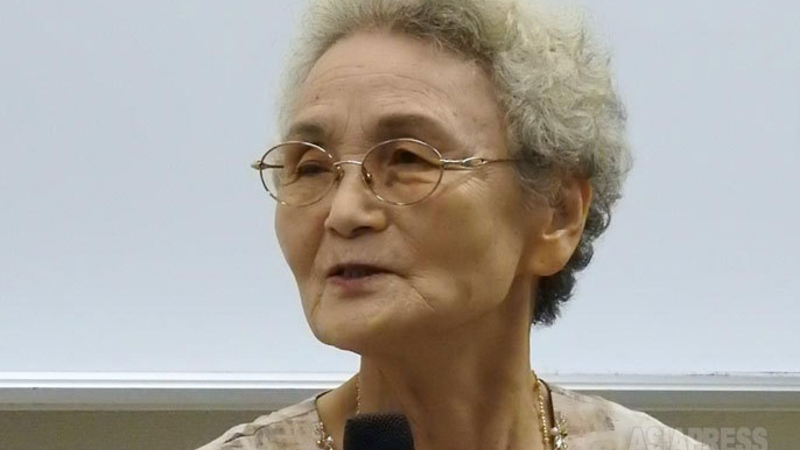 Park Young-sook lost two brothers and two sons who were charged with political crimes. She is originally from Hiroshima. (Taken by Koda Hajime)

"I saw a dark and strange-looking cloud rising up in the distance and said, 'What is that?'"

On the morning of August 6, when the atomic bomb was dropped on Hiroshima, Park Young-sook watched the mushroom cloud rise from Yamagata District, Hiroshima Prefecture- where she had been recently evacuated to. Nine days later, Japan surrendered. When Park returned to Hiroshima, her house had disappeared without a trace. Her sister-in-law had died in the explosion.

There were an estimated 50,000 Koreans living in Hiroshima at the time of the bombing. Seventeen years after watching the mushroom cloud rise as a 5 years-old child, Park joined thousands of other Koreans in returning to North Korea as part of the “Homecoming Project”. Now, however, Park is a North Korean defector.

The Homecoming Project, which started in 1959 and lasted for 25 years, allowed around 93,000 people, including 7,000 with Japanese citizenship, to relocate to North Korea. Among them, there were an estimated 2,000 people who survived the bombings in Hiroshima and Nagasaki. (The current number of survivors is said to be about 50.)

Remarkably, about 2 out of every 13 Zainichi Koreans living in Japan at the time decided to return to North Korea aboard the ships departing from Nigata. Although the event is widely referred to as the first mass migration from a capitalist country to a socialist state, little is known about the actual lives of those who returned North Korea.

Next Page： ◆“They kept me from seeing my son’s body.”
1 2
Facebook Twitter はてブ Pocket Feedly
RECOMMENDATIONS
＜Inside N.Korea＞ Sanction Works? Sharp Rise in Fuel & Price Index
2018/Jan/15 ASIAPRESS investigated price changes in urban markets of n...
＜N. Korea＞ Strict Coronavirus Prevention Measures Result in 99% Year-on-year Drop in Trade for October
North Korea's trade with China in October decreased by 99% compared to...
〈Photo Report -2〉Unauthorized Street Vendors (Pyongyang)
"We can no longer rely on our government!" 2011/December/12 Report by ...
＜Inside N. Korea＞ Resentful Residents Forced to Foot the Bill for National Flood Recovery as Regime “Has No Money”
The torrential rains that hit the eastern part of North Korea in Augus...
[Video Report] What do the ordinary people eat in N.Korea? There are many types of food sold at hawker stalls. (Hawker stalls are individually owned food stalls)
What kind of food is available at hawker stalls in North Korea? In Jun...
The Dark Ages: Residents Complain as “Power-saving” Zones Expand Across the Countryside
“We don’t have electricity for even a second. Not a blink. It’s like l...