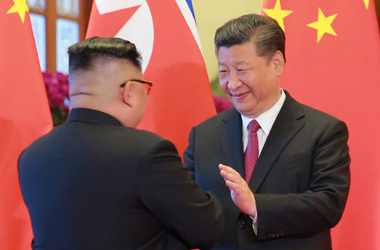 On June 20, Chinese President Xi Jinping visited North Korea for the first time. The same day, a reporting partner living in the northern region of the country spoke with ASIAPRESS, giving insight into the atmosphere of the country and how the Chinese leader’s visit was received by the people. (Kang Ji-won/ISHIMARU Jiro)

“This visit by Xi Jinping is historic. It is no less historic than the summit with the United States. Heads of state from big countries like the United States, Japan, and China have not visited our country. South Korean President Moon Jae-in is not on their level.”

According to the reporting partner, Workers’ Party officials in Hyesan, Ryanggang Province, expressed this view, speaking very highly of Xi Jinping’s visit. However, it is simply the ‘official view’.

What, though, is the reaction of the general population? In the words of the reporting partner, “There are many who say they hope improved relations with China will make life easier than it is now. However, there is not a growing sense of anticipation.”

On the contrary, traders reacted “coldly” to President Xi’s visit.
Next page : The reporting partner continued...

Next Page
1 2
Facebook Twitter はてブ Pocket Feedly
RECOMMENDATIONS
Rimjin-gang Report - Pyongyang Construction Sites to Build 100,000 Apartments (2011) North Korea
In the capital city Pyongyang, a fully-fledged construction boom has b...
People Struggle To Collect Firewood for Winter
The Daily Life of North Koreans2014/February/19 Written by PAEK Chang-...
Inside The Book 〈Table of Contents〉 JPEG SAMPLE IMAGE
Table of Contents Preface: To the Readers of the English Edition of Ri...
Jang Song-thaek enraged Kim Jong-un: Reason of Purge found on Photos (part2) Jang Song-thaek was executed for the violation of the sole leadership system
Analysis of North Korean Media ISHIMARU Jiro, editor of Rimjin-gang, P...
● Profiles of Our North Korean Reporters
(All the names our staff in North Korea are noms de plume.) Kim Dong-c...
＜Special Feature＞ Escaping N.Korea…History and Present State(2) Defectors have become a threat to the regime…Around 200 live in Japan ISHIMARU Jiro
After the start of the COVID-19 pandemic in 2020, there has been an un...