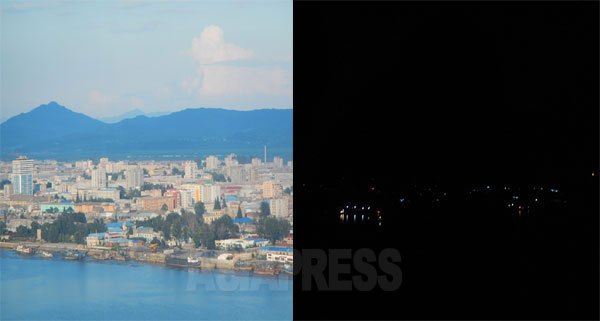 (Photo) Sinuiju, photographed during the day and night. The picture was taken from the same spot on the Chinese side of the border. Though it receives electricity as a priority, Sinuiju is rarely lit at night. Photographed in August 2015 by ISHIMARU Jiro

Reports are coming in from all regions of North Korea that the power supply has been paralyzed since the beginning of winter. It seems that Kim Jong-un himself has issued orders to save power. Multiple reporting partners in the northern region of the country contributed to this report.

North Korea is dependent on hydroelectricity production for about 70% of its power. From December each year, the power supply worsens as dams freeze. In recent years, however, this has become a very serious issue, with some areas receiving no electricity at all.

According to a reporting partner in Hoeryong, North Hamkyung Province, only 30 minutes to 1 hour of electricity was provided per day since December 27. Despite Hoeryong City’s favored status as the birthplace of Kim Jong-suk, the mother of Kim Jong-il, there are some days when the city receives no electricity at all.

A reporting partner living in Hyesan, the main city of Ryanggang Province, said on December 20, “At present, we are receiving about 3-4 hours of electricity per day.”
Next page :The power grid is going to collapse...