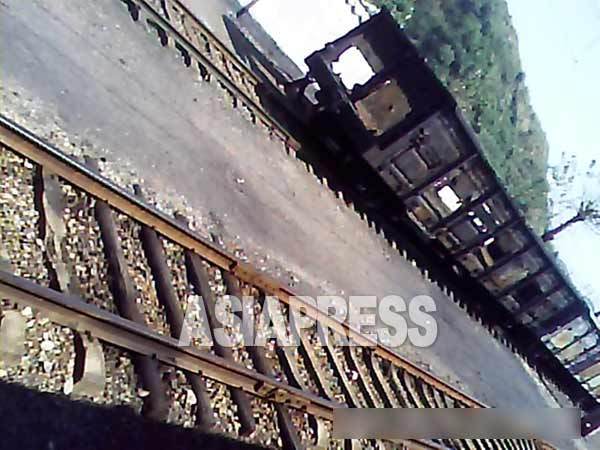 (Photo) The quality of railways is very poor in North Korea. Accidents are common as dilapidated railcars are still in service. Taken by Ri Hoon in September 2013 (ASIAPRESS)

On November 3, a train carrying materials for the construction of a special tourism zone derailed on the Hyesan-Samjiyeon line in the northern Yanggang Province. Three workers of the local construction ‘storm troops’ were seriously injured and taken to the hospital, according to information passed on to our reporting partner by local railway workers. The injured are said to be in a critical condition.

The derailment occurred at Hwajeon Station, two stops away from Hyesan Station. Immediately after the accident, all personnel and equipment were dispatched from Hyesan and Wiyeon stations in order to restore the tracks to working order.

A railway official speaking to a reporting partner said, “Recovery from a derailment usually takes a considerable amount of time as it requires a lot of money and personnel. This is the first time we've recovered as quickly as this.”

The construction of a special tourism zone in Samjiyeon County is a top priority for Kim Jong-un. According to our reporting partner, railroad officials feared that they would be punished by Kim Jong-un for any construction delays the derailment would cause and, therefore, poured all effort into restoring the railways as quickly as possible. Just before the accident, on October 30, state-run media reported that Kim Jong-un had toured Samjiyeon County.

Electric cables along the railway linking Hyesan and Samjiyeon, the two main cities of Yanggang Province, have been connected. However, the railway roadbed has not yet been completed and cannot be used to transport people. To finish the roadbed, a freight car carrying cargo and stones is being operated 2-3 times a day. (Kang Ji-won) 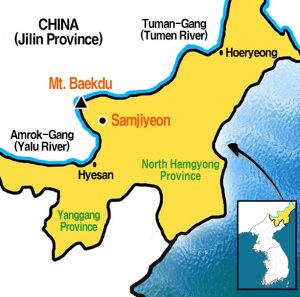 Facebook Twitter はてブ Pocket Feedly
RECOMMENDATIONS
The Making of Rimjin-gang 〈03〉
The Making of Rimjin-gang The Making <01> <02> <03>...
＜Photo Report on N.Korea＞ Soldier’s Hard Life 5. Poorly Nourished Young Soldiers: Soldiers’ hunger started from 80’s. (4 Photos)
◆ Hunger of soldiers started from 80’s.Lee Sang-bong, a defector from ...
＜Interview with a North Korean Woman (1) ＞ Why the COVID Situation is Causing a Surge in “Black-Market Abortions”
The plight of North Korean residents is worsening. In order to block t...
＜Inside N. Korea＞ Tens of thousands of North Koreans mobilized for Samjiyeon construction project
Samjiyeon County, visited by President Moon Jae-in in September, was a...
The Government Launches Massive Campaign of Seizing Rice For The Military
North Korea Food Situation - 2 2011/September/10 Report by Kim Dong-ch...
＜Latest Photo Report＞ Scenes of North Korea Captured by Super Telephoto Lens (1) Residents Replaced by Border Guards Along the Riverside [ISHIMARU Jiro]
It has been a year and a half since the Kim Jong-un regime closed the...
＜Photo Report＞ Abandoned Elderly (PART1) Collapsed Social Welfare System Has Left the Elderly on the Streets.
2016/Jul/26 Children and the elderly are the biggest victims of the c...
-30C, Bitter Coldness! How do the ordinary people in N.Korea survive the bitter cold? Enforced composts gleaning! Fire wood and coal saving emphasized!
2016/1/28The bitter cold which overwhelmed East Asia has frozen Japan ...
＜Latest Report on N.Korea＞People Trapped Behind Barbed Wire (4 Photos)
In late July ASIAPRESS reporter recently visited the Yalu River on th...
Gas Prices in North Korea 1.6 Times Higher Compared to Beginning of the Year…Situation in Ukraine Expected to Exacerbate Economic Difficulties
Market prices for gasoline and diesel oil have skyrocketed in North Ko...