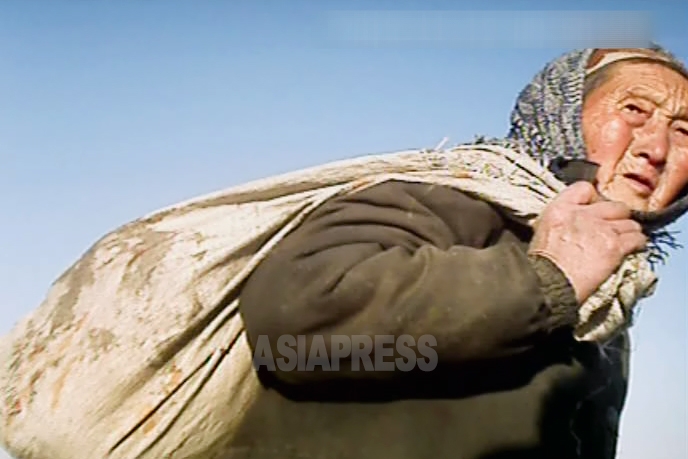 (FILE PHOTO) An elderly person gleaning grains from a farm field. Taken by ASIAPRESS in a rural village in Sinuiju, North Pyongan Province, in November 2012.

The price of North Korean corn, a staple food in the country, is skyrocketing. According to a recent ASIAPRESS investigation of market prices in the northern region of the country, corn prices leaped 20% with the start of 2023, leading to considerable and increasing discontent among ordinary people. (KANG Ji-won)

※ 100 South Korean won equals around 670 North Korean won. All prices are per one kilogram.

A reporting partner in Yanggang Province who took part in the market survey said that anxiety around the price of food has increased, so much so that an increasing number of people are trying to hoard as much corn at cheaper prices as possible.

“The harvest didn’t go well last year, so there are rumors that white rice would reach 10,000 won (per kilogram) if (North Korea) failed to receive food aid from China or other countries. People are anxious and are hoarding corn. Corn is much more inexpensive than white rice and can be eaten as noodles (in addition to being cooked and eaten as is). With the start of the new year, there’s a lot of people worried about how they’ll get by.”

“Despite the fall harvest, the price of food didn’t fall, leading many people to prepare themselves for the worst this year. There are people who have gone missing after going into financial ruin and others who have abandoned their families to become wanderers in the mountains. Everyone is very anxious because many terrible things are happening around them. Meanwhile, the authorities are screeching about punishing mass hoarders of food and people spreading false rumors.”

Moreover, the government’s intensifying control over the food supply is making people worried. The Kim Jong-un regime began running state-run food stores in 2019 and launched full-fledged operations of these stores starting in 2021.

That being said, people weren’t able to buy as much food as they wanted. The state-run food shops only allowed people to buy food once a month, and only five kilograms of food for each person in a single household. This amount of food amounted to only around a weeks’ worth. People without money to spare welcomed the sale of food at the state-run shops because they were cheaper than that sold in markets. However, they weren’t able to buy enough food and were forced to make up the loss by purchasing food in markets. The Kim Jong-un regime seems to be suppressing sales of food in markets with a view to implement a “monopoly” on the food supply.

A reporting partner told ASIAPRESS that, “The government had informed everyone that all food would soon be purchased in state-run food shops, but that never materialized. That’s why there’s no one who believes that’ll happen.” In short, the government is failing to acquire enough food that would allow it to monopolize the food supply.

It remains unclear when state-run food shops will stop selling food. The poor harvest last year has led many anxious people to hoard food as insurance against food shortages that could lay ahead.

“Propaganda and agitation officials cry as they lecture about how we all need to work together to protect socialism, but people know that they can’t survive that way. They can’t do their businesses because of harsh state intervention, and they don’t have any more cash income. People can’t live that way if they want to survive,” one of the reporting partners told ASIAPRESS.