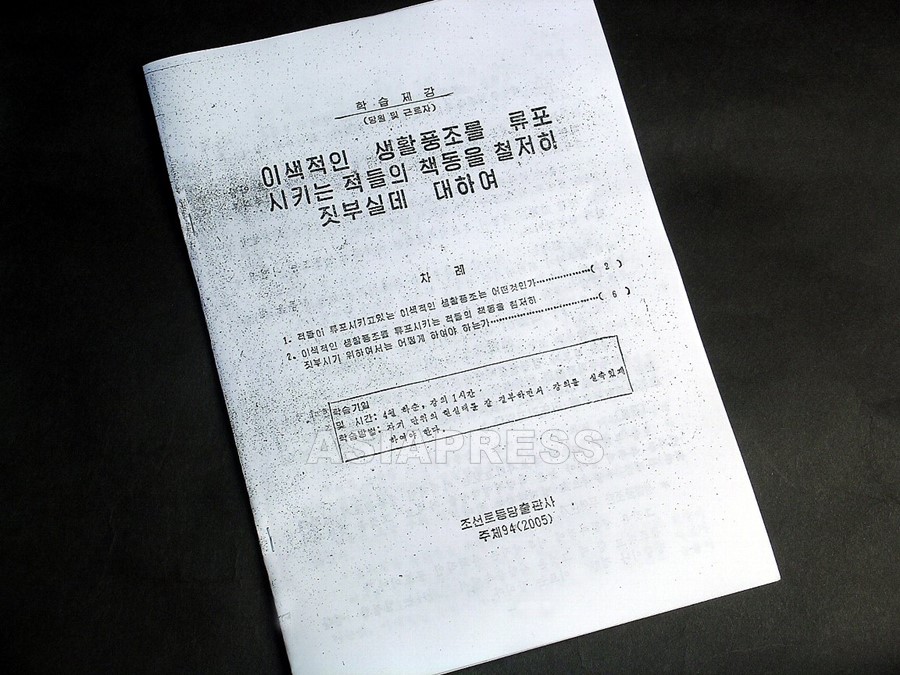 A copy of a document secretly leaked from North Korea. The document calls on readers to be on guard about the flow of external information into the country. (ASIAPRESS)

◆ Kim Jong-un may have ordered a stop to the leaks

For the past 20 or so years, several media agencies in Japan and South Korea have acquired and released documents published in North Korea. These news outlets include the Tokyo Shimbun, Mainichi Shimbun, NHK, and ASIAPRESS in Japan, along with several South Korean outlets that include public broadcaster KBS and Daily NK, which specializes in obtaining information from North Korea.

Internal documents from North Korea are diverse and can range from “lecture materials,” or documents handed out during lectures for ordinary people, to confidential documents created by party and government agencies.

North Korean leader Kim Jong-un, unhappy about this state of affairs, reportedly handed down an order recently instructing officials to thoroughly crackdown on the leakage of documents. While this information has not yet been confirmed, an ASIAPRESS partner in the country has reported that Kim Yo-jong is overseeing this crackdown in cities that border China, which is where most leaks of documents occur. 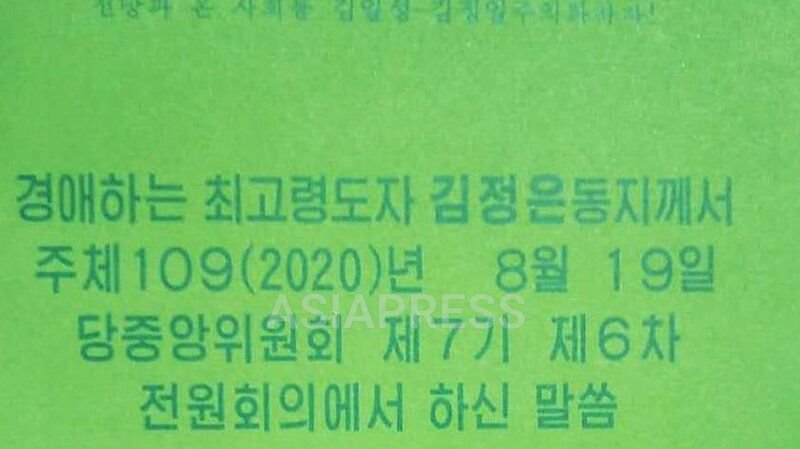 An internal document entitled “Commentary by Comrade Kim Jong-un" acquired by ASIAPRESS in 2020.

◆ With printing prohibited, documents are being viewed on digital devices

In mid-April, an ASIAPRESS reporting partner in the northern part of North Korea provided information about how the authorities are managing documents.

One cadre explained that the reason for this was that the country faces difficulties in producing paper, so rather than print and distribute documents only to later recollect and then recycle them, it is better to view the documents on digital devices. Another cadre said that ‘it’s a major problem that documents frequently get leaked to other countries.’ In fact, party and government agencies along with enterprises have begun rigorously managing copies of documents. North Korea has long restricted the use of copy machines, of course, but the authorities have significantly intensified their monitoring (of document copies).”

Starting in April, Socialist Women's Union study sessions, attended mainly by housewives, have begun using tablet PCs to view documents, according to the reporting partner. During lectures for ordinary people held by cadres from the Ministry of Social Security, Ministry of State Security, and Workers’ Party, lecturers are now using digital devices to view documents, rather than using paper documents.

The reporting partner said that he believed that officials use something like PowerPoint during the lectures because it is impossible to distribute tablets to ordinary people.

Another reporting partner told ASIAPRESS that there has recently been changes in how officials manage their documents:

Next Page： ◆ Most documents leaked from the country are photographs
1 2
Facebook Twitter はてブ Pocket Feedly
RECOMMENDATIONS
Stimulant Drugs Take Root in the Daily Lives of the N.Korean People (PART2)
2013/October/07 Written by LEE Jin-su<< PREVIOUS (PART 1) Drugs ...
＜Inside N. Korea＞ Hyesan Heist: Police Search for Stolen Military Data, Suspect Inside Job
In late May, police in Hyesan City, Ryanggang Province, began a massiv...
Possible Further Executions Related to Jang Song-taek Carried Out
Three persons - including the husband of Jang's niece, and two actress...
〈Photo Report 4〉Inspection At The Metro Station Entrance - "No Shabby Cloths, No Large Luggage!"
<Photo Report>- 4 Inspection At The Metro Station Entrance - "No...
＜Latest Report from N. Korea＞ Regime Aims to Block Coronavirus at Border as Local Hospitals and Populace Remain Woefully Unprepared for Potential Outbreak
The North Korean authorities have announced through state media that t...
＜N.Korea photo report＞A Look at North Korea's Impoverished Rural Women (2) "Life is like being a cow on a farm" (Photo 5)
◆Stuck on a farm for a lifetime In North Korea, there is the word ‘non...