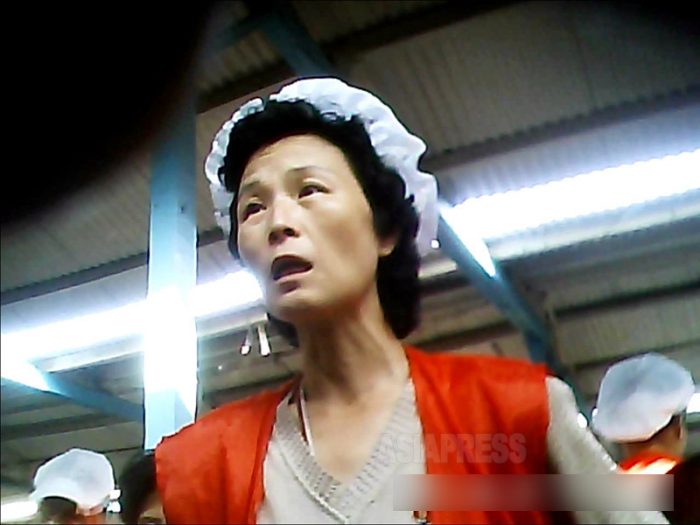 Women running stalls at a public market where, by rule, vendors must wear a sanitary cap. Infrastructure in the capital and other areas is poor but the concept of hygiene is gradually taking hold. Photographed in Ryanggang Province in June 2013 by ASIAPRESS

◆ A firsthand look at the hospitals

As of March 22, the North Korean government has continued to announce that there are no coronavirus infections within the country. Meanwhile, rumors swirl among the populace of numerous infections and deaths.

Neither the rumors nor the word of the government can be confirmed as the truth. However, a survey by ASIAPRESS finds that, despite the poor condition of North Korea’s medical system, the regime is rolling out sensible prevention measures and imposing quarantines where needed.

A reporting partner from Ryanggang Province visited a clinic in the heart of Hyesan City to investigate the matter. The clinic has 3 full-time staff members, including its director. In addition, 3 medical students and an official from the provincial quarantine office are said to be providing support.

According to the reporting partner, “Patients are supposed to list their symptoms over the phone before coming to the hospital. If the patient describes symptoms of tuberculosis or a cold such as coughing or a fever, the doctor will instruct them to stay away from the hospital and prescribe fever reducers or cold medicine over the phone. The patient is then supposed to go to a pharmacy to buy the medicine. The only patients currently admitted to hospitals are those who need surgery and those with fractures, etc.”

• Those with cold-like symptoms should contact the quarantine center first.
• Those who do so are instructed to fill out a registration card, recording their address, place of work, and recent activities.
• Extra care is to be taken when examining patients who work for trading companies or live near the Yalu River by the Chinese border.
• Doctors examining patients with tuberculosis or cold-like symptoms should keep a distance of 2 meters or more.
• Countermeasures and response action will be reported daily to the city hospital, which is to act as a base of response operations.

◆ Warning to the Chinese across the border: “Those seen dumping into the river will be shot”

It can be said that the regime’s countermeasures are a reasonable response for preventing infection of medical officials and for tracking the movement of people with symptoms. This system was not put into place, however, until late February.

Doctors have been warned to be wary of patients residing near the Yalu River due to the regime’s vigilance against the virus being transmitted from across the Chinese border. North Korean authorities have banned residents from washing their clothes or collecting water from the banks of the Yalu River since around February 7. Border guards have also been banned from using river water, so soldiers are said to be collecting water from private homes nearby.

In late February, North Korean authorities at the border informed Chinese counterparts that they would fire without warning upon Chinese citizens seen smuggling goods or dumping refuse at the Yalu River.

In addition, the regime has been sticking to propagandistic claims of “zero infections.” According to reporting partners, the claims are meant to create an impression among residents that “there are not yet any infected persons in Ryanggang Province.”

Next page :No COVID-19 infection tests conducted in the provinces...

Next Page： ◆ No COVID-19 infection tests conducted in the provinces
1 2
Facebook Twitter はてブ Pocket Feedly
RECOMMENDATIONS
＜Inside N. Korea＞ Dangerous Directive: Kim’s On-Site Order Causes Series of Fatal Construction Accidents
A reporter partner living in the northern province of Ryanggang spoke ...
＜Inside N. Korea＞ More Elderly and Children Begging in the Streets…Girls at Greater Risk of Sexual Abuse
The population of vagrants, known as "kochebi," has been on the rise ...
＜Inside N.Korea＞ Installation of Electric Fence at Border Makes Defection and Smuggling Impossible
2017/Jul/12 It is said that the electricity was supplied to the barbe...
[Special Report] ＜Inside N. Korea＞ Shaken by Sanctions- Regime Takes a Direct Hit as Pyongyang’s Privileged Feel the Pressure
On February 27, Kim Jong-un and Donald Trump met in Hanoi for a secon...
Rimjin-gang - Editor's Notes on N.Korean Reporters
All our staff inside North Korea work under assumed names.Any article ...
＜N.Korea＞ N.Korean Military Facing Recruit Shortage Due to Increased Draft Dodgers and Deserters
2017/Jan/20 An ASIAPRESS reporting partner inside North Korea reporte...