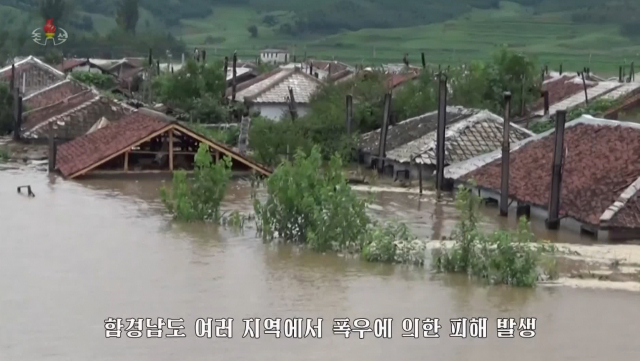 The torrential rains that hit the eastern part of North Korea in August caused extensive flooding across South Hamkyung Province. State-run media reported that about 5,000 people were evacuated and more than 1,000 houses were damaged.

The regime’s extreme measures against coronavirus have caused the economy to deteriorate significantly and residents are vehemently complaining. According to a reporting partner living in the northern region, the authorities have said that measures “are not obligatory” and are to be “supported voluntarily.” Though, “in reality, [residents] are being coerced.”

It seems that the flood damage was most severe in Hamhung, the second-largest city after Pyongyang. It is said that "Hamhung has suffered the most economic damage, and many people have died due to the coronavirus restrictions imposed since last year."

The people's groups have decided to organize support for Hamhung and other areas in South Hamkyung Province. Our reporting partners explained the situation as follows:

"There are many people who have lost their homes and have nowhere to go, so although the authorities say we should help them voluntarily, it is all words. I had no choice but to pay for it since it was mentioned so often in the meetings. Everyone was contributing 20,000 to 100,000 won. Since the state doesn't have money, people have to pay whenever something happens. The pressure is so strong that even those who don't have money can't help but pay the officials. It's tough."

As of early August, 10,000 won in North Korea is equivalent to about 3 USD. One cannot buy even two kilograms of white rice for that price.

After last year's torrential rains caused widespread agricultural damage in North Korea, the Kim Jong-un regime ordered the construction of flood control channels in preparation for flooding in the spring. However, since there was also damage this time, "the officials in charge will face legal punishment," said our reporting partner (Kang Ji-won).

＜Related Article＞
Facebook Twitter はてブ Pocket Feedly
RECOMMENDATIONS
N.Korea Food Shortage: Not a matter of absolute shortage, a matter of distribution and access - 2
2011/September/20 ISHIMARU Jiro- Chief Editor/Rimjin-gang Another wom...
＜Inside N. Korea＞ Border Burning: Police investigate potential arson in Hyesan after fire claims 24 houses
Police are investigating the cause of a blaze which destroyed or damag...
＜Emergency Interview＞Lockdown Death Toll Climbs in Hyesan: “We are Dying Due to Lack of Medicine and Food”
On February 15, the lockdown of Hyesan in Ryanggang Province, located ...
＜N.Korea photo report＞A Look at North Korea's Impoverished Rural Women (2) "Life is like being a cow on a farm" (Photo 5)
◆Stuck on a farm for a lifetime In North Korea, there is the word ‘non...
● Profiles of Our North Korean Reporters
(All the names our staff in North Korea are noms de plume.) Kim Dong-c...
Revision of Task and Treatment for Police Officers Launched - The State Increases Its Control Over People
2013/September/12 Written by KANG Ji-won, a defector reporterIt has be...
Monetary Mystery: North Korean Won Withstands Sanctions, Suddenly Surging by 10%
On August 6, the exchange rate of the North Korean won against the US ...
Pressure Point: China Stifles Smuggling as North Korean Exports Tumble
According to trade figures released by China’s customs authorities in...
＜Photo Report＞ Abandoned Elderly (PART4) Collapsed Social Welfare System Has Left the Elderly on the Streets.
2016/Oct/11 Pyongyang has been the only area in North Korea where peo...
Column –Voices from inside N.Korea, ISHIMARU Jiro
Among East Asian countries, only the people of North Korea have been l...