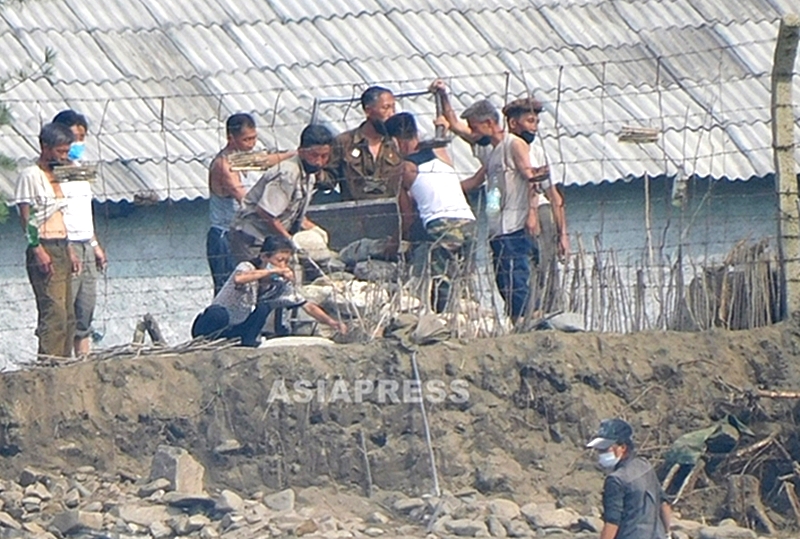 (Photo 1) People mobilized for the construction of the Yalu River embankment. Photographed from the Chinese side of the North Pyongan Province in mid-July by ASIAPRESS.

It has been a year and a half since the Kim Jong-un regime closed the border with China to prevent the influx of the coronavirus.

Human traffic has almost ceased. Many of the diplomats and officers of international organizations stationed in Pyongyang have left the country. In addition, as of the end of July, international mail services have been completely suspended. The 1,400 km long border between North Korea and China is on high alert, making it impossible to cross or leave the country. Therefore, reliable avenues of information have been completely cut off.

Over the years, ASIAPRESS has been bringing Chinese cell phones into North Korea to keep in touch with reporting partners. However, it has become difficult for them to move around the country, and it is becoming more and more challenging to grasp the situation outside of their local area of residence.

Now, there are even people starving to death among the impoverished and vulnerable urban population. So, what is going on inside North Korea? To find out, in mid-July, our China-based reporting partner went to the lower reaches of the Yalu River on the border between North Korea and China. This report is part of a two-part series showing scenes in North Pyongan Province, as taken with a super-telephoto lens from the Chinese side. 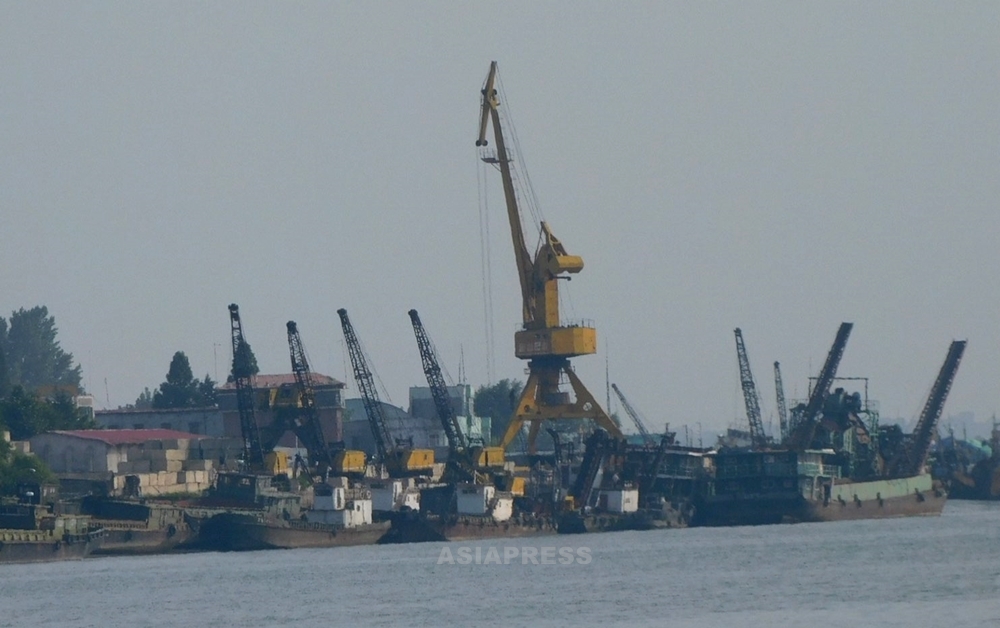 (Photo 2) There was no one at the pier by the Yalu River, all the ships were gathered on the shore, and the cranes were not in operation (Sinuiju City).

◆Disappearing Residents: The Strictly Guarded Border is Full of Soldiers.

On the other side of the border from Dandong, Liaoning Province is Sinuiju city of North Pyongan Province. A Chinese tourist boat is in operation in the vicinity of the international communication bridge. The photographer also approached North Korea by boat.

“There are hardly any people on the North Korean side except for soldiers. Before the COVID-19 pandemic, it was common to see people loading and unloading cargo, fishing, and walking around. There were no North Korean ships operating in the river too."

The North Korean authorities have been controlling the access of residents to the Yalu and Tumen Rivers, which form part of the northern border, since before the COVID-19 outbreak. Nowadays, they are on high alert. In addition to a total ban on access to the rivers, a particular unit known as the "Storm Corps," composed of soldiers selected from the Korean People's Army and other departments, has been deployed to strengthen the border checkpoints. 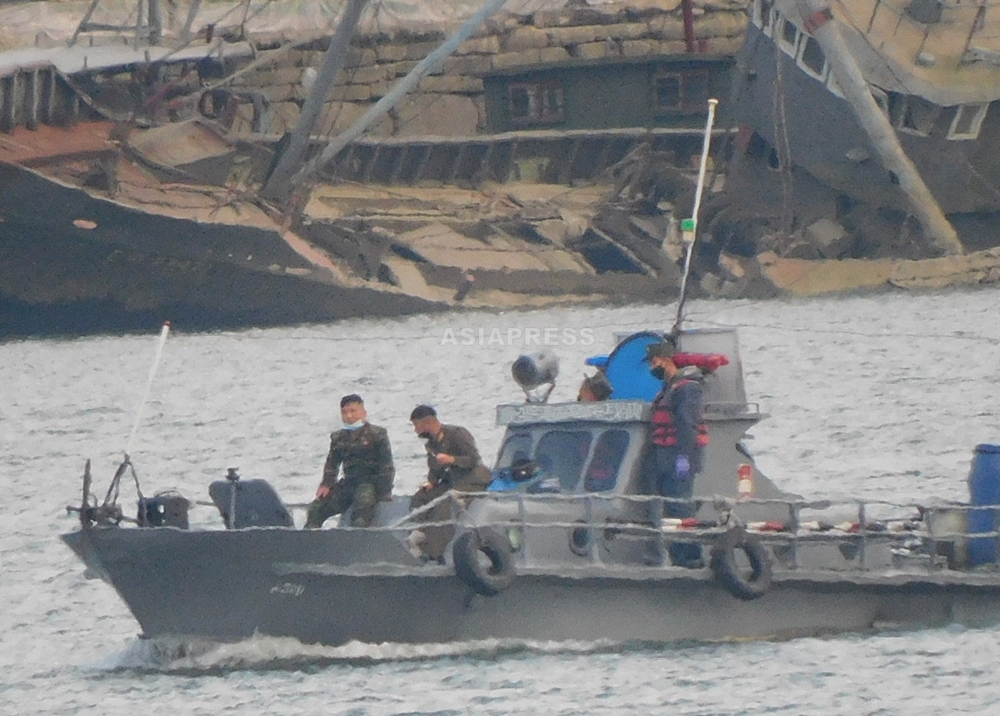 (Photo 3) A North Korean security boat patrols the Yalu River. Those with camouflage uniforms are border guards, and those with brown uniforms are People's Army troops. In the background is an old abandoned boat (Sinuiju City). 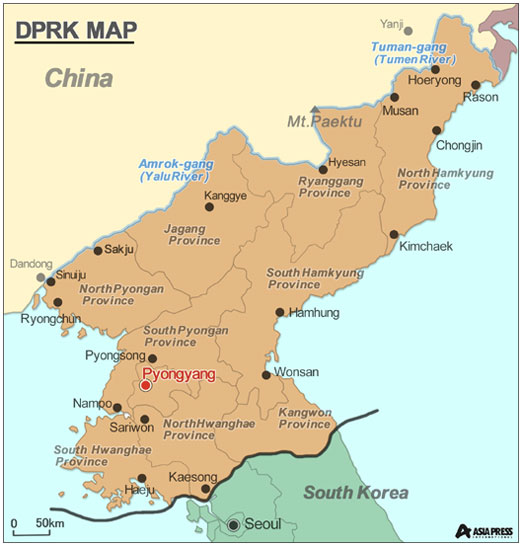 It is claimed that the increased security is to prevent the influx of viruses through smuggling goods and collecting trash. Last August, under the name of the Ministry of Social Security (police), the government even issued a declaration that the border area would be turned into a buffer zone and that anyone approaching without permission would be shot on sight.

But that is not the only purpose. One of the primary purposes of the policy is to prevent impoverished residents from fleeing to China due to the economic chaos caused by the extreme measures against coronavirus.

(Photo 4) The declaration we obtained stated that "targets and livestock that enter the Yalu and Tumen Rivers banks will be shot without notice." Photographed in late August 2020 by ASIAPRESS. 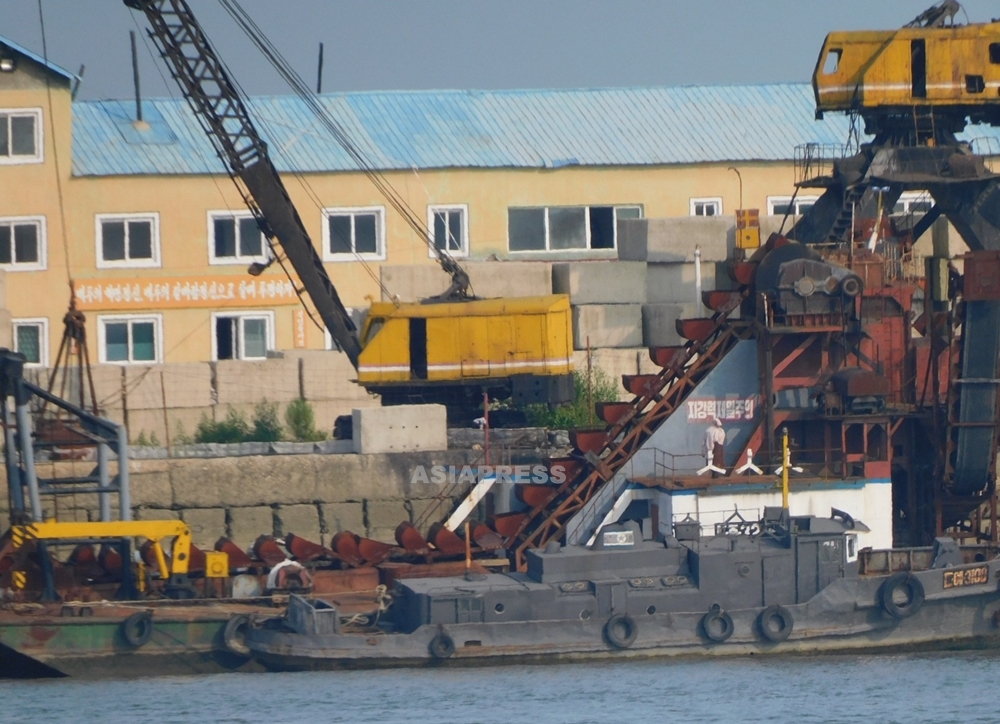 (Photo 5) The conveyor at the dock is turned off and has become rusty. The slogan, "Self-power first," is visible (Sinuiju City). 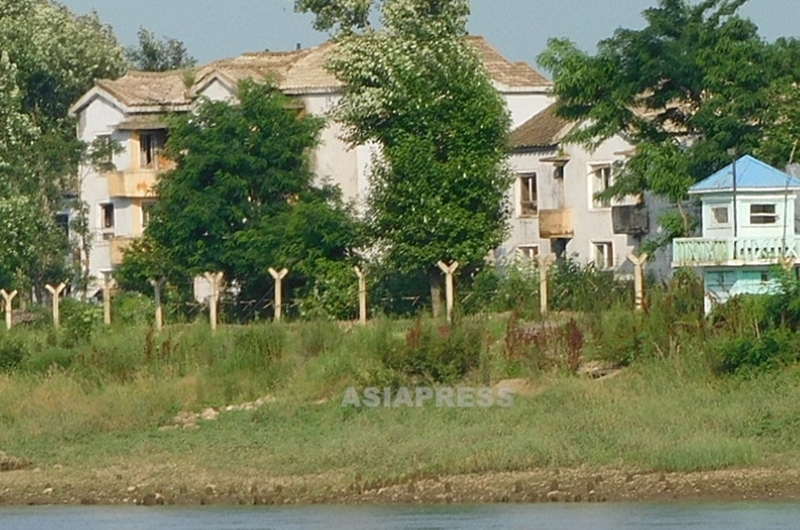 (Photo 6) Barbed wire has been put up to prevent people from going out to the Yalu River. The right side of the apartment building is a guard post (Sinuiju City). 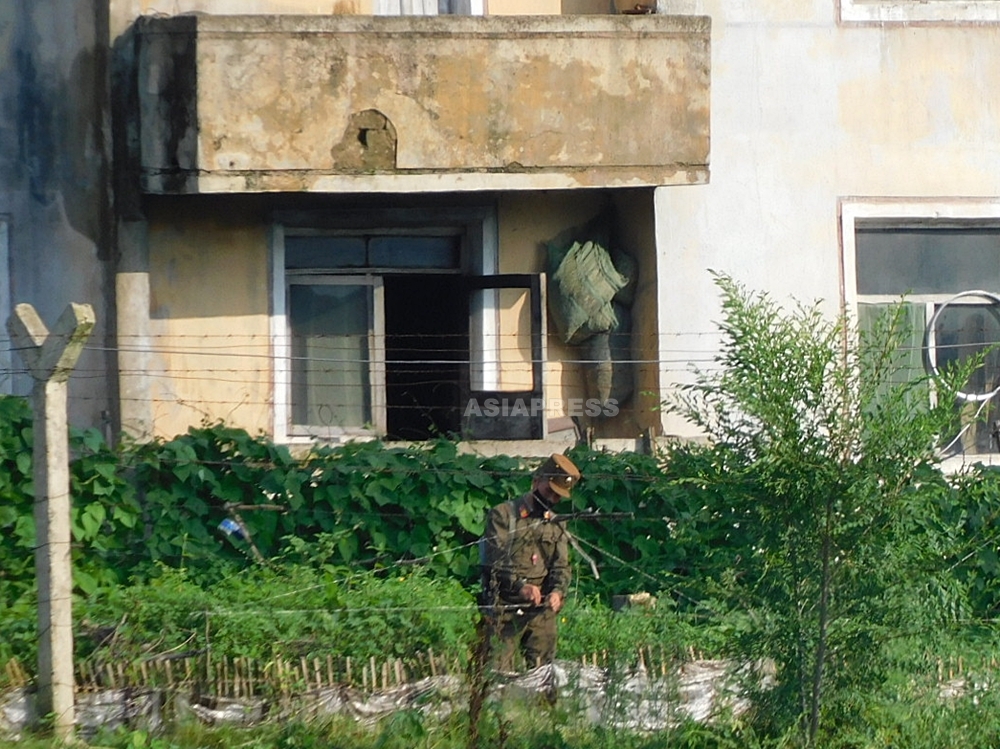 (Photo 7) A soldier inspecting barbed wire. The building in the background is an apartment building (Sinuiju City). 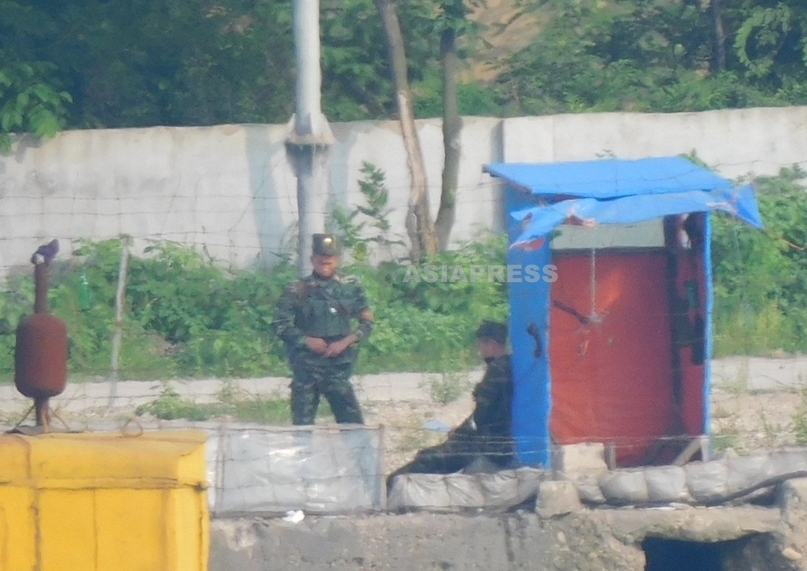 (Photo 8) The riverside is full of checkpoints and outposts. Two border guards in camouflage uniforms have their black masks over their chins. (Sinuiju City). 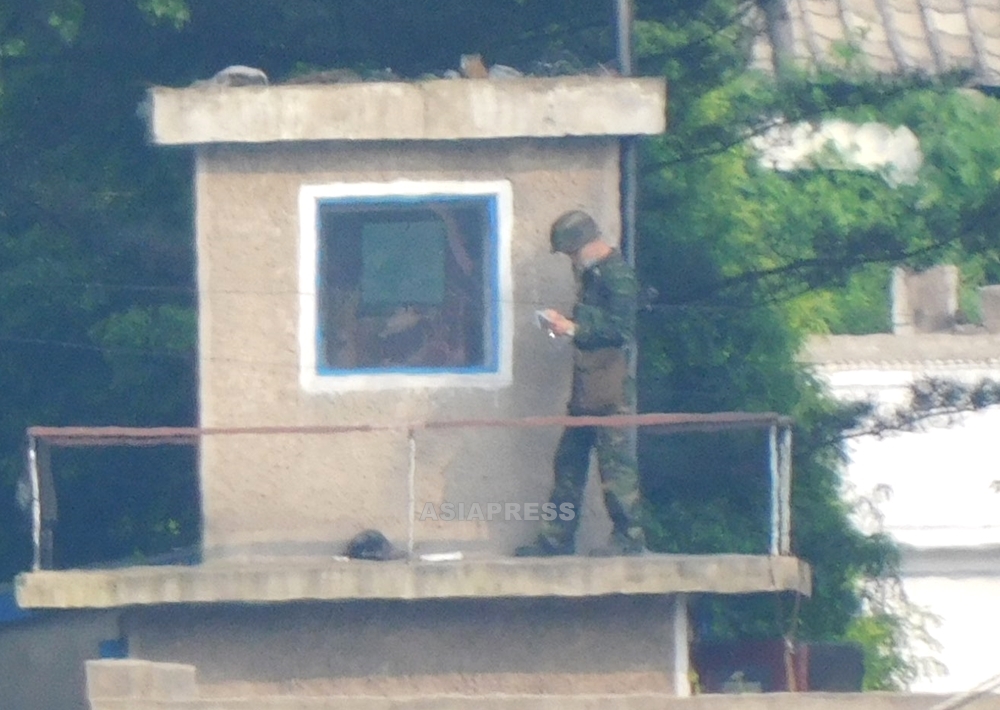 The following photos were taken during a visit by ASIAPRESS in October 2017. At that time, there were many residents along the riverside, but now there is little to be seen except for soldiers. 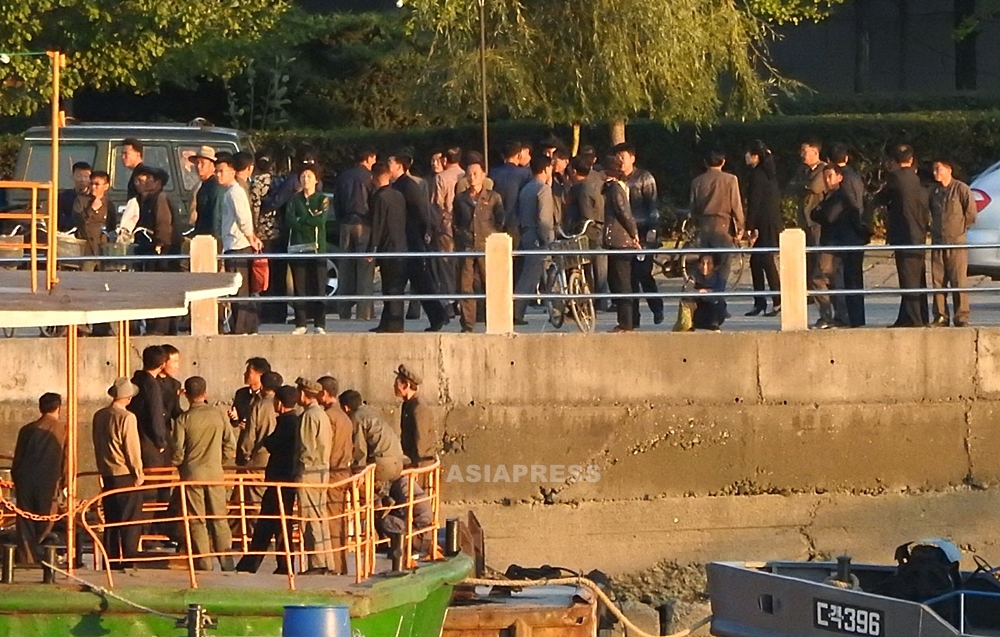 (Photo 10) People using a boat to leave for work gathered at a pier. Photographed from the Chinese side in October 2017 by ISHIMARU Jiro. 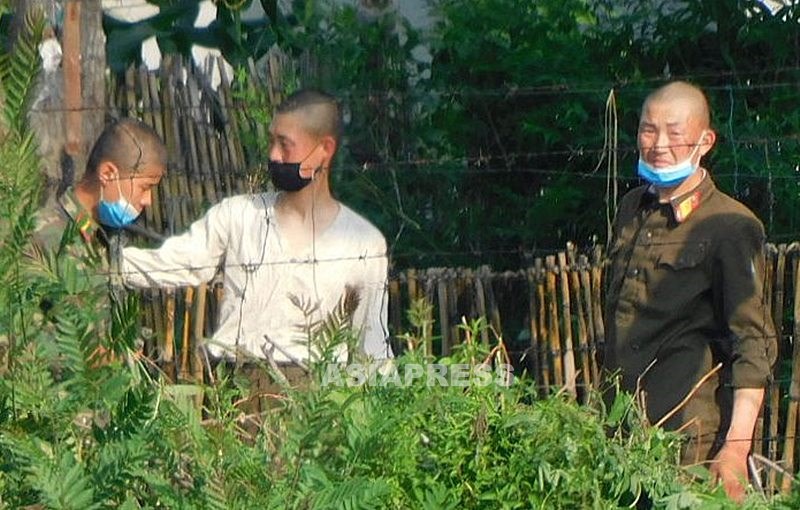 (Photo 11) A young border guard wearing a mask (left) and a soldier stand guard behind the barbed wire (Sinuiju City). 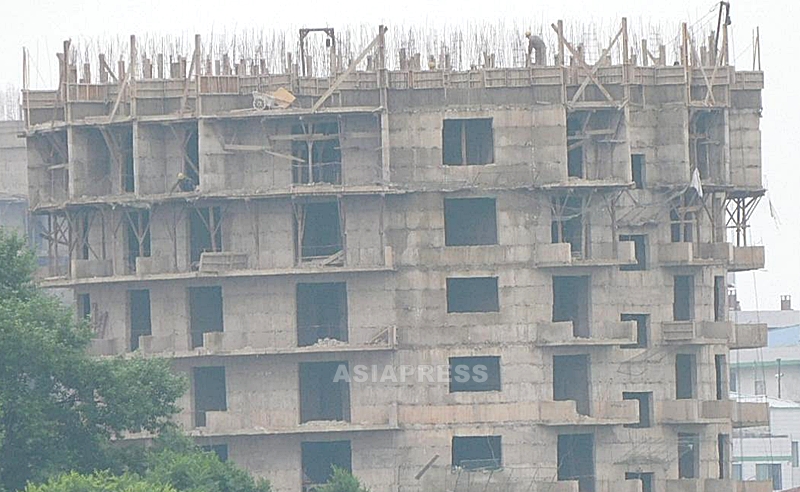 (Photo 12) A high-rise building under construction. You can see a few people working on the upper floors (Sinuiju City). 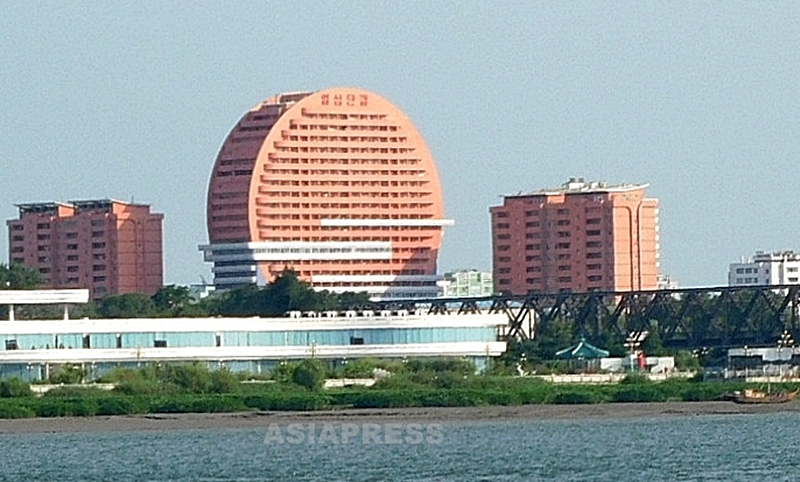 (Photo 13) The circular building is eye-catching even from the Chinese side. The slogan at the top says, "One Heart, One Mind". The steel bridge on the lower right is an international bridge connecting the city with China (Sinuiju City). 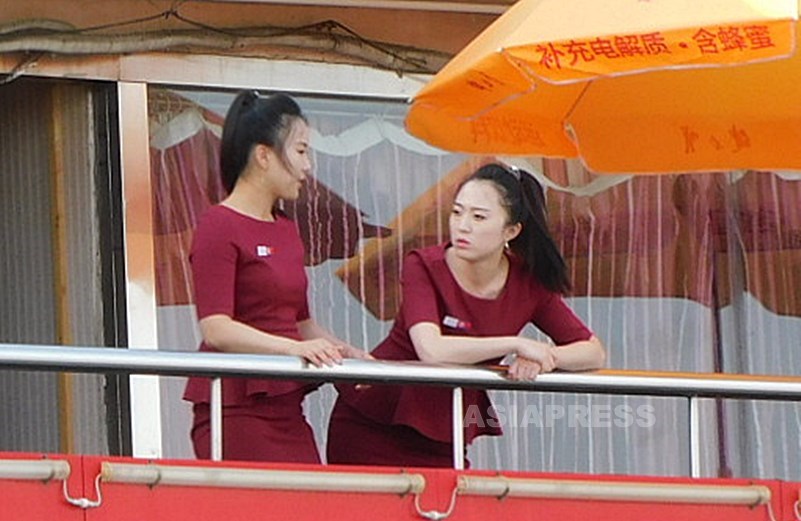